Summary: A look at backshifting and other aspects of indirect speech 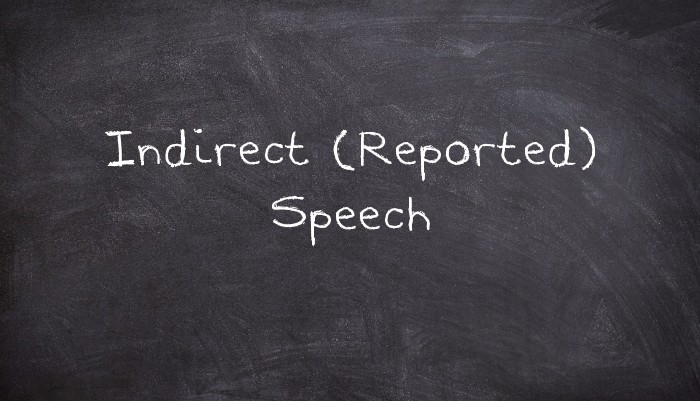 #1 and #3 are examples of direct speech – the words used are exactly those used by the speakers when they uttered them.

#2 and #4 are examples of one type of indirect speech, reported speech. They report the words without directly quoting them.More specifically, #4 is a reported/indirect question.

#5a, b and c are also examples of indirect questions, but they are not reported questions. Although they each have an underlying question, “Where does Luke live?”  that direct question is never uttered.

As we saw in #1 and #2, the change from direct to indirect speech can involve changes in pronouns, tenses and time adverbials:

In these notes we shall concentrate on the change in tense, though we shall look at a number of other points associated with indirect speech.

The change in tense that we find in some, but not all, examples of indirect speech is often referred to as backshifting – the tenses are shifted/moved back to one normally used for a previous time:

Past tenses normally become past perfect:

“When did you leave Germany?” – They asked me when I had left Germany.

The modal verbs can, may and will change to could, might and would, respectively.

Could, might, would, should and needn’t do not change - there are no past (perfect) forms of these verbs.

Must generally does not change, though it can change to had to when it denotes obligation. This change is not essential.

We consider shall in section 7.

When the verb of speech introducing the indirect speech is in a present tense (simple, progressive or perfect), we do not backshift:

“I could see you tomorrow.” – He says (that) he could see me tomorrow.

When the verb of speech introducing the indirect speech is in a past tense (simple, progressive or perfect), and the situation reported is still true at the moment of speaking, we can, but do not have to, backshift:

“I could see you tomorrow.” – He said (that) he could see me tomorrow.

When the verb of speech introducing the indirect speech is in a past tense (simple, progressive or perfect), and the situation reported is no longer true at the moment of speaking, we nearly always backshift. However, we do not always shift past tenses to past perfect, though it is always acceptable to do so:

“Didn’t Wendy retire last month?” – He was asking if/whether Wendy (had) retired the month before.

“I could see you tomorrow.” – He said (that) he could see me the next day.

(“Where is Mary working?”) – Do you know where Mary is working?

“Aren’t you coming to my party? – Marion asked if I was going to her party

Agreement:    “I think you are absolutely right.” – Peter agreed with me.

Instruction:....“Close your books.” – The teacher told us to close our books.

Promise: ........“I will pay you back next week” – George promised to pay me back the following week.

Enthusiasm:.. “Isn’t it a lovely day?” -  We said asked that it was not a beautiful day.

A small number of speakers of BrE use shall instead of will with me and us to express future certainty. This is reported as should if the subject in the indirect speechis I or we, but as would if there is a second or third person subject:

Shall I/we...? may be used for an offer, or to ask if somebody else wants something done:

“Shall I carry your bag for you?” – The porter offered to carry Mary’s bag.

“Shall we come again tomorrow? – The girls asked their grandmother if she wanted them to come again the next day.