raymondaliasapollyon said:
I know '-tion' nouns can refer to an activity or thing, but referring to things, are they naturally used in a collective sense?
Click to expand...

When referring to things, they're used either uncountably (singular) in a generalised sense, as with our example here, or countably (singular or plural). When you say a 'collective' sense, do you mean used countably? As a plurality of individual things?


raymondaliasapollyon said:
I see some people object to the singular "construction" in favor of the plural "constructions." It seems that they don't readily take the word to refer collectively.
Click to expand...

I think those people (myself included) think the plural works better there. Like me, they're probably imagining that cities contains lots of densely packed things.
T

If you want to talk of densely packed bridges, go ahead. Just don't be surprised if people think your description is a bit weird or unnatural.

I wouldn't call the many bridges densely packed.

For me, Charles Bridge in Prague does get packed. 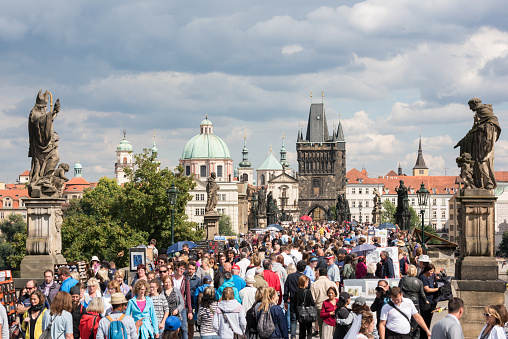 The famous historic Charles Bridge that crosses the Vltava River in...