Teaching Inversion: Is inversion worth teaching?

Summary: Is inversion worth teaching? 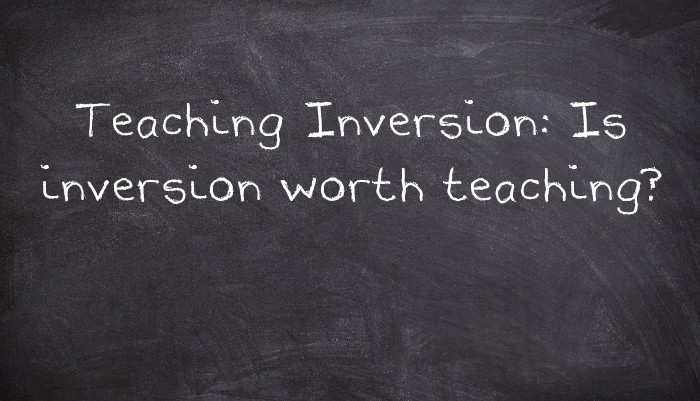 Almost every advanced ESL exam tests inversion and almost every advanced course book teaches it. Students dutifully learn that if not only comes at the beginning of a sentence, then the first verb inverts, along with the rules for inversion with simple forms where an auxiliary verb has to be introduced. Then they learn that after only when the second verb inverts, though the logic behind this will pass most learners by, if there is a readily recognisable logic. The whole process is complicated and time-consuming, yet once they have left the hothouse atmosphere of the ESL examination class, how many actually bother to use inversion?

Teaching a structure simply because it is tested in ESL exams and not because it has any real, practical use seems a rather futile exercise, like the American satirist's description of a surgical procedure that had no medical benefit but showed the surgeon's skill by taking the patient as close to death as possible and then bringing them back. Teachers get students to learn it for the exams, but once they have the certificate in their hands, it seems that the vast majority of ESL students shelve inversion and move on. As a structure, it adds almost nothing to their knowledge; it is primarily a rhetorical flourish. Most advanced students will understand texts containing inversions without any great difficulty anyway, so it does not add greatly to their ability to understand. Inversion can easily be avoided and never using it does not mean that a student is less able to communicate. Teaching inversion strikes me as an inappropriate use of resources; if something is taught solely because exams teach it, then it is a parasitic part of the curriculum. Many non-native students hate phrasal verbs, but phrasal verbs should be taught because they are a vital part of the language and a knowledge of the more common ones and the ideas behind them are an essential part of the English language. However, I cannot work up any enthusiasm about teaching never have I, when it is merely an alternative to I have never, and one that mostly is learned to get certificates. Even more rarely will students use the adverb seldom, let alone place it at the start of a sentence and follow it with inversion. The inversion in the previous sentence is unlikely to impede comprehension for an advanced learner, but does not really add anything to the ssentence that could not be achieved without it.

Inversion seems to complicate the picture for ESL learners coming from very different language families for no real benefit; a knowledge of English inversion is a luxury rather than a necessity. To an Asian speaker, say, the whole exercise may well seem utterly pointless, and very few will ever start a sentence 'So great was her surprise that ...'. I think teaching time could be put to better use than the teaching of inversion. Teaching inversion is not an exercise in getting students up to native speaker level, but an imposition and exam boards would, I feel, be doing teachers a favour if they stopped testing it.