Broadband Britain- Backwards to the Future

Summary: Why the UK is going to suffer from its failure to create the infrastructure for true broadband. 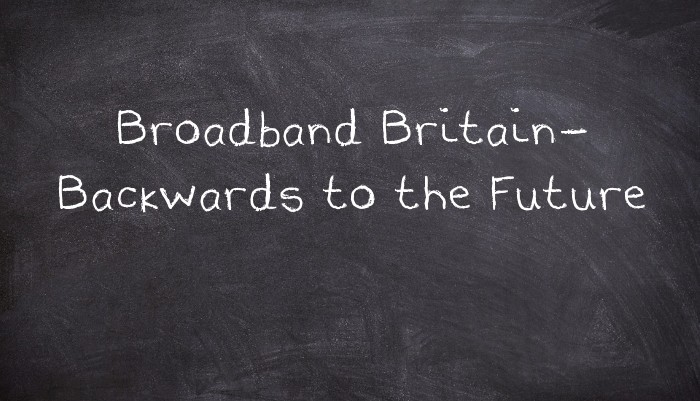 I spent this summer in the UK (August 2005) after having lived in Tokyo for several months. When staying at a friend's house, I was using his broadband connection and went off to the kitchen to make a cup of tea while I rebuilt some databases onsite. I moaned to his flatmate about how slow the internet was in the UK, and she said that he had been saying how fast his connection was now that he had managed to upgrade to a 2Mbps connection, a connection described as 'blistering' by some internet providers, yet a tiny fraction of the speed available in many countries. In my flat in Japan, I have an internet connection fifty times faster, with unlimited download.

It seems to me that rip-off Britain has struck again, and the refusal to create the infrastructure for the information age will have serious repercussions in the future. British companies move information slowly and expensively compared to foreign rivals, and the decision to stick with copper wire for the last few metres to homes and offices will, with hindsight, be looked on as a disastrous and shortsighted error in my opinion. I remember reading a jingoistic article about how our engineers had managed to extract top broadband speeds out of copper wire and, while what they have achieved is certainly fantastic, it simply is not true.

I can download several gigabytes in a morning, while working on my site and talking to a friend on Skype, and my partner, plugged into the same connection, doesn't notice any difference in speed on her machine. Phone companies and providers may be making a fortune, but the British economy will suffer from this policy- failure to build a proper internet infrastructure means that endless hours are wasted while workers download things that their competitors can do in a fraction of the time. At home, families cannot realistically run a number of computers simultaneously off the same 2Mbps connection of shared broadband, which simply means that when the system is being used, you don't even get the pitiful 2Mbps of 'blistering' access.

I was paying nearly ten pounds for my 100Mbps connection (unlimited bandwidth), but my landlords decided that I could have it for free- that is better than many corporate contracts in the UK costing hundreds of pounds a quarter or month, depending on your provider. I can't help feeling that, in years to come, people will look back on the decisions made now to rip customers off instead of building a decent infrastructure for the information age will be one of the most calamitous decisions made in this country, one that will make us a more backward nation, unable to compete with our fast efficient rivals.