Burnout in the Flame Wars

Summary: A look at how our Delphi forum went wrong. 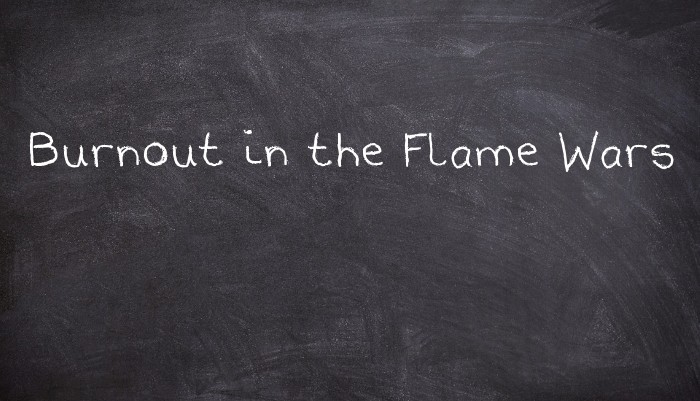 We set up a UsingEnglish forum in Delphi a few years ago, which was very successful. However, recently it has all gone pear-shaped. A couple of years ago, I attended a lecture in 'Conflict Management in Forums' given by someone who had managed a successful forum in China that had all gone wrong, and what happened to us was so similar that it struck me that there may well be a pattern in behaviour.

We managed to build up a successful community that was growing all the time, with thousands of posts every month. Then the arguments started. There were difficult moments and people were expelled and others left. There was even an especially unpleasant moment when someone with access to the control panel deleted the entire contribution of a major poster. However, at first we seemed to have bounced back, but the hurts and anger came back later in a much more virulent form.

The basis of the quarrel was a dispute between the descriptivists and the prescriptivists, some of whom seemed unable to argue in a civilised manner about their differences, but I now feel that it ran deeper than that. The actual fighting didn't take place on our forum, which seemed to have become neutral territory, but on a forum without any supervision and threads ran into hundreds of posts fighting about differences in views. Alternative forums were set up and the fighting ran across them all. Our Delphi forum collapsed as members spent far more time in the other forums fighting. It had become a pure clash of egos and things had turned ugly. I followed and tried to calm things, though this was the wrong thing to do. Our webmaster tried as well, but things had spiralled out of control and it had become a flame war. One burning issue for many was that on our site we had sided with one poster, and this was a source of resentment. When it was put to us that we should ban this person as well, I decided to ban myself. Things had gone badly wrong and we were part of the problem, and I burnt out in the flame wars. By the end, it was impossible to distinguish between wrong and right- there had been so much unpleasantness on both sides. Sadly, our Delphi forum has now entered a decline and I think it has reached the stage where the community is too small to maintain it as a viable forum. I do feel sad that we have seen a forum we built up collapse and a lot of it is down to my naivety.