Summary: About Cockney Rhyming Slang and a discussion on whether splitting infinitives is wrong. 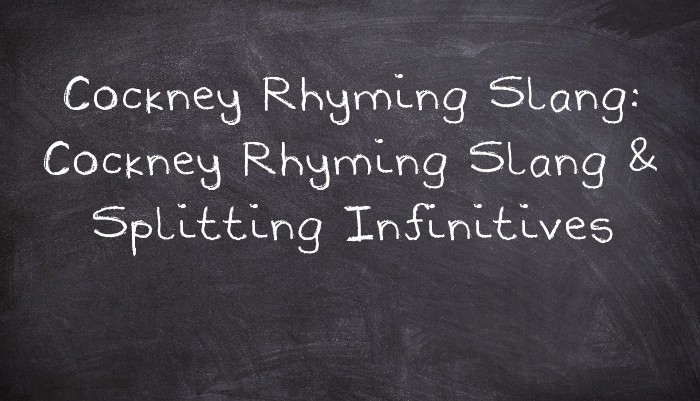 What is Cockney Rhyming Slang?

A Cockney is a Londoner; the original definition was someone born near enough to hear the bells of Bow, which meant people in the east of the city.  The word Cockney means the egg of a cockerel (male hen) and was meant as an insult, implying dishonesty in business deals by trying to sell non-existent or low quality goods, or so the story goes.  The term is now used happily and proudly by the people of the east and north of London, who regard themselves as the 'real' Londoners in a very cosmopolitan city where a lot of the population have come in from other areas of the country or abroad.

As well as having a distinctive pronunciation and many grammatical features, the language of London is most notable for its Rhyming Slang.  This consists of using a phrase that rhymes, sounds the same, as the word you want to say, so 'telephone' becomes 'dog and bone'.  Unfortunately, many of the phrases then lose the second word, making it very hard for the outsider to guess the original meaning; 'rabbit' for 'talk' comes from the phrase 'rabbit and pork', but few would be able to guess it.

A lot of the original rhyming slang appeared among the market traders in the east end of London in the 19th century, but it is still used and new words and phrases are being invented all the time.  At the moment, it is very fashionable to use famous people's names, so the DJ Pete Tong is used meaning 'wrong'- 'thing's have gone Pete Tong'.

What is a split infinitive?

If you put a word between TO and the verb following it, you have split an infinitive.  In the past, it was definitely regarded as wrong, so we had a poll to see what people think now.

The results of the poll show that most people accept that splitting infinitives is all right, although a minority believe that it is completely wrong.  The largest vote was by people who accept it, but don't really like it.

There is a growing tendency to put adverbs of degree (completely, partially, fully) before the verb, splitting the infinitive, which is widespread in the media- 'to fully agree', etc.  Some people don't like it, but it is so common that it can't really be seen as an error, although many would never do it and dislike it.

One area where I split the infinitive on purpose is with negatives.  If I say 'I decided NOT TO DO it', it doesn't sound as strong to me as 'I decided TO NOT DO it', which sounds more determined to my ear.  Some would disagree.

It is not a simple issue to resolve.  My advice would be not to do it unless you have a reason.  However, if anyone criticises you for doing it, you can always remind them that William Shakespeare happily split infinitives and few would dare to say he wrote bad English!