Summary: Creationism is being taught in a number of academies in the UK. 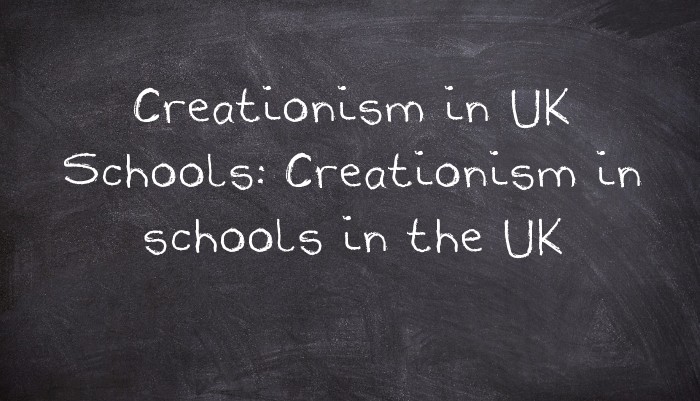 There has been a lot of talk about the arrival in the UK of the teaching of creationism, the belief in the literal truth of the Bible and a rejection of Darwinism. While this has been an issue in the United States for a long time, it has only recently started here. Sir Peter Vardy, a wealthy car dealer in charge of Reg Vardy PLC, has invested in a number of Academies in the North-East of England, and plans to invest in more. The deal with the government is that the taxpayer funds 90% of the costs of the Academy, which replaces a failing school, and the rest of the money comes from private investment, in these cases Sir Peter.

Prime Minister Tony Blair has declared himself to be 'very happy' with the teaching of creationism alongside Darwinsm (Prime Minister's Questions Commons Hansard 13/3/02: column 886-7, Source). There is growing opposition to the Vardy Academies; there have very recently been objections raised in Conisborough, where another is planned.

It is troubling that government money is being put into these academies, where such ideas are taught. If people want this kind of idea to be taught as fact, then they should bear the entire cost of the operation- there is no justification for the state paying money into such education. There is opposition from the Church of England; the Bishop of Oxford has said that such teaching 'brings 'Christianity itself into disrepute', the Bishop of Durham called for the school to be reinspected, and it has been described as 'simply scientific and theological nonsense' (letter in Church Times). Creationists beliefs are not representative of most of mainstream Christianity; the Roman Catholic Church does not subscribe to their ideas either. It is a fringe and extremist belief without any scientific basis, dependent purely on a literal interpretation of certain areas of the Bible, an interpretation that is not extended to everything in the Bible, such as prohibiting mixed fabrics or allowing for daughters to be stoned to death. Selective literalism is inherently unsound.

The text of a notorious lecture, The Teaching of Science- A Biblical Perspective, given at Emmanuel College by the Head of Science, later removed from the Christian Institute website after it was criticised, shows some of the dubious methods used by some creationists to peddle their ideas. He suggests that 'Teachers must therefore do all that they can to ensure that pupils, parents and fellow colleagues are reminded frequently that all is not what it seems when popular so-called scientific dogma presents itself before them.' In other words, he is recommending that teachers deliberately and systematically undermine the naturalism that has 'infected' the National Curriculum, and goes through a list of ways to do this.

Pedagogically this strikes me as a dangerous approach; deliberately undermining a curriculum suggests that the body of knowledge being taught is unsound, undermining pupils and students belief in the education system. There is nothing wrong with religious ideas being taught where they belong in the curriculum: in religious studies, but a deliberate and systematic attempt to replace science with what is accepted as myth, even by the majority of churches, is an unwelcome addition to the education system, and one that should not benefit from state funding.