Summary: A couple of light-hearted and entertaining looks at the English language and why it can sometimes be so confusing to learn. 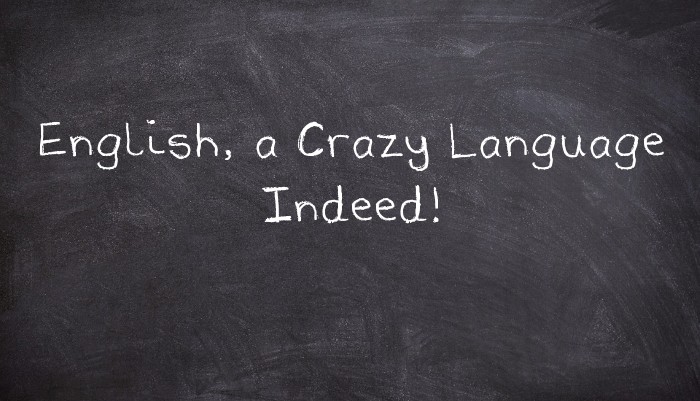 I thought I'd provide you with a couple of light-hearted and entertaining looks at the English language. The first shows you just how confusing the language can sometimes be, whilst the second demonstrates why some suggest that English spelling should be reformed.

English is a Crazy Language

This piece by Richard Lederer is very famous. For me it is a perfect demonstration of why people get so confused with this complex language - here's a sample from it, but be sure to read the full version of English is a Crazy Language on his site (archived link):

Let's face it -- English is a crazy language. There is no egg in eggplant nor ham in hamburger; neither apple nor pine in pineapple. English muffins weren't invented in England or French fries in France. Sweetmeats are candies while sweetbreads, which aren't sweet, are meat.

We take English for granted. But if we explore its paradoxes, we find that quicksand can work slowly, boxing rings are square and a guinea pig is neither from Guinea nor is it a pig.

And why is it that writers write but fingers don't fing, grocers don't groce and hammers don't ham? If the plural of tooth is teeth, why isn't the plural of booth beeth? One goose, 2 geese. So one moose, 2 meese... One blouse, 2 blice?

Doesn't it seem crazy that you can make amends but not one amend, that you comb through annals of history but not a single annal? If you have a bunch of odds and ends and get rid of all but one of them, what do you call it?

If teachers taught, why didn't preachers praught? If a vegetarian eats vegetables, what does a humanitarian eat? If you wrote a letter, perhaps you bote your tongue?

Sometimes I think all the English speakers should be committed to an asylum for the verbally insane. In what language do people recite at a play and play at a recital? Ship by truck and send cargo by ship? Have noses that run and feet that smell? Park on driveways and drive on parkways?

How can a "slim chance" and a "fat chance" be the same, while a "wise man" and "wise guy" are opposites? How can overlook and oversee be opposites, while "quite a lot" and "quite a few" are alike? How can the weather be "hot as hell" one day and "cold as hell" another?

Have you noticed that we talk about certain things only when they are absent? Have you ever seen a horseful carriage or a strapful gown? Met a sung hero or experienced requited love? Have you ever run into someone who was combobulated, gruntled, ruly or peccable? And where are all those people who are spring chickens or who would actually hurt a fly?

You have to marvel at the unique lunacy of a language in which your house can burn up as it burns down, in which you fill in a form by filling it out and in which an alarm clock goes off by going on.

Now I know why I flunked my English. It's not my fault, the silly language doesn't quite know whether it's coming or going.

According to 103-year-old Ed Rondthaler, English spelling is dumb! He's one of a number of people who advocate reform for English spelling, and looking at this video he's produced it's hard to disagree:

If you would like to find out more about English spelling reform, check out these links for more information:

Is English a crazy language? Do you agree or disagree with spelling reform? Do let us know what you think in our forum.