Summary: A look at English language school franchises in Japan. 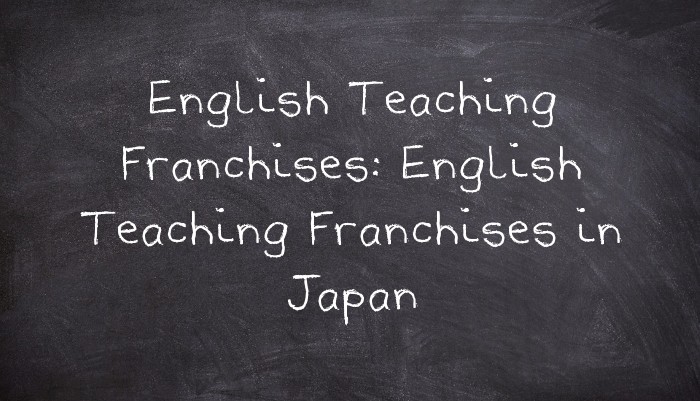 There is a lot of discussion on the Internet at the moment about EFL/ESL teaching franchises in Japan, and opinion is deeply divided about the quality of the different franchises being offered. Naturally, the principle of caveat emptor should be applied before making any decision, especially one involving considerable sums of money for the average English teacher in a contract in a foreign country, governed by an unfamiliar legal system. Anybody considering such a purchase should seek professional legal and accounting help first. This article just looks at some of the information available on the Internet.

There are considerable differences in prices charged, both for the initial joining fee and the administrative and other fees that are payable by the franchisee:

Notes- At today's [8/12/05] prices, the Smith's franchise costs ¥1,812,908. However, the rule of thumb guide for conversion often used in Japan would make it ¥1,500,000- the dollar is at a high rate at the moment. Other prices are quoted in yen on the Smith's site. This makes it six or seven times as expensive as the cheapest franchise.
-Modern English is a relatively new company, which is the reason given for their lower price, at least when compared to Smith's, though they intend to increase it as the company grows. These two companies appear to be very similar in approach.

With a price range like this, it is certainly worth examining the quality of the product on offer- is the priciest franchise six, or more, times better than the other? How? When buying a fast food franchise, you are buying into a household name- how well-known are these franchises and what is their reputation, how good is their teaching system, how much advertising do they do, what do you get for your money? There are many questions I would need answering before buying something that is six times as expensive as another product in the same area.

The expenses after that are also different:

¥300,000, though an important figure as it is the starting point for royalty payments for Smith's and Modern English, is not necessarily a break-even point for a franchisee. Leaving the other set-up costs aside, though Smith's gives a figure of ¥720,000 for furnishing and equipping a basic school, a revenue stream of ¥300,000 would not give you the equivalent of an average EFL/ESL salary in Japan under these systems, as rent has to be added. With this included, the maximum you could be earning would be under ¥200,000, while the figure quoted as average for a teacher in Japan seems to be in the order of ¥250,000. Then, of course, there are expenses like utilities. Therefore, to make a reasonable living, your sales would need to be higher.

Smith's states that they are not allowed under Japanese law to make income claims, but Modern English does give an indication of what might be achievable They say that if you work outside the school and earn ¥70,000 a month to supplement your income while you're building things up and get an average of 3 new students a month, you will earn well above the standard income. 'Well above' is difficult to prove one way or the other because it is a subjective term, but let's test it out:

Income from teaching outside the franchise: ¥840,000 (assuming a twelve-month year)

Income from 3 students on average a month:

However, we have to factor in some franchising costs:

Smith's mention an enrollment fee of ¥20,000 for each student and if Modern English charge this, there would be ¥720,000 to add, but it still falls considerably short of an average teacher's salary, unless I have missed something obvious. They do say that it is a conservative number and a quarter of what they got at the head school, but it also assumes a 100% retention rate over the period. I think you need to be pulling in over ¥400,000 at either of these schools just to make an average teacher's salary:

Therefore, you would need student levels a lot higher than that to recoup your investment. In the case of OneWorld, with a much lower start-up fee and a fixed annual payment, this would be a less onerous task, and would grow proportionally easier than the others as revenue increased. In the case of Smith's with start-up costs of over two million yen, it could be quite a while before you've recouped the investment and are looking at making a profit, unless you get a lot of students very quickly and retain them.

Distributing flyers is mentioned on both Smith's and Modern English as a way of attracting students. The former gives the prices and they range from ¥1.5 for a basic one to ¥4.6 for a glossy number. In an older site, one of Smith's franchisees talks about this and gives a figure of seven flyers in a six month period through each mailbox in the area chosen as a figure that gets conversions, in addition to a couple of hours every morning outside the station handing them out to hundreds of commuters in the morning rush hour. Clearly, this will add up into another hefty expense to add to the costing of the profitability of the operation. I couldn't find a reference to this on the OneWorld site. Then, of course, there are office supplies and utility bills.

Any lawyer will tell you to look at what happens when things go wrong. Smith's includes some information about how the franchisee can get out of the contract. It looks simple enough-you give notice, have to pay the admin fee and the royalties and 50% of the goodwill for each student at a rate calculated by the franchiser. Hang on- not by an established formula agreed by both parties at the outset? No, by the franchiser. I would certainly run that past a lawyer before reaching for the Mont Blanc. This would simply transfer power to the franchiser.

The mathematics doesn't strike me as particularly rosy, though OneWorld's prices put it well ahead of the other two on this. It is possible that I may be missing something about these deals; I have, after all, never taught in a language school in Japan, but the idea of becoming a franchisee doesn't take my fancy, above all where start-up costs are very high and where exiting would be at a price fixed by the other party. Caveat emptor.