ESL Employment: Is ESL employment in the doldrums?

Summary: Is ESL employment in the doldrums? 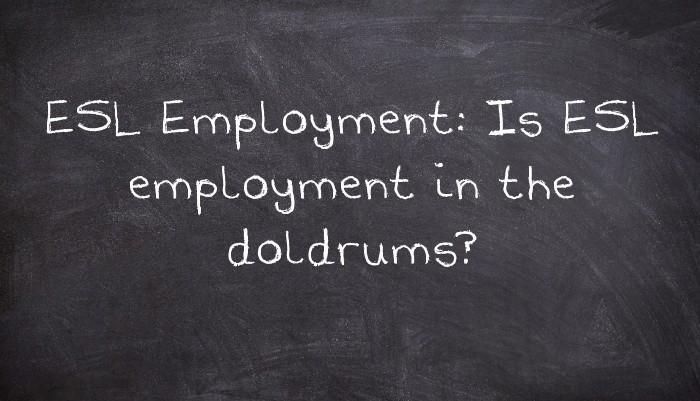 I've seen a lot of negativity about the state of the ESL employment recently. In theory, everything should be fine- there's a huge demand, six hundred million ESL students in China alone, the position of English in international communication has no serious challenger, and globalisation and the growth of the internet are likely to maintain this position for the foreseeable future.

However, sites like English School Watch are littered with posts marked 'warning', 'beware' and 'scam'. It seems that hundreds of schools fail to keep promises, underpay, lie about accommodation, etc. There are DIY guides to doing a runner from South Korea. Yet the internet is alive with adverts for courses. One site I visited offers courses in 30 cities in Australia and New Zealand, proclaiming that degrees are not necessary and that they'll take pretty much any adult on, from 18-70. There are courses everywhere, and it's hard to tell the good from the bad. There are the notorious scam courses operating in Asia and Europe to give backpackers some sort of paper in exchange for quite a lot of their cash. There are online courses, many claiming to be accredited. Reading Free-ESL.com's review of the accrediting bodies is a salutary reminder of what lies at the heart of much of the problem. There is a huge training industry churning out people with bits of paper, which may be real qualifications or complete garbage. There is, quite simply, a drive the bottom going on in ESL training.

In an industry where standards have often been neglected in the drive for money, where people a long way from home have few rights, there have always been cowboy schools, ranging from the ghastly chains pumping out their own drab, grey method as a way of selling courses and their materials, to the sharks out to rip customers and teachers off.

However, above all, there are now far too many courses turning out teachers with the most rudimentary skills and basic qualifications. The market is saturated, and has been likened to the 'migrant labor situation of the 1930’s in America'. With students in places like the UK graduating heavily in debt, the salaries offered in many ESL schools won't attract them, so standards will inevitably fall. For an utter hatchet job of the state of the profession, try The slavery of teaching English from the Daily Telegraph.

An academic qualification, despite the claims often made by people selling them, is not a guaranteed asset. If I buy a house, I reduce the available housing stock, but if I get a qualification, I am merely one more with the same piece of paper; the more certificates on the market, the lower the value. If everyone has one, then the job will go to the person asking for the least, so conditions at the starter end of ESL are bound to get worse. At the higher end, where a Master's degree is the minimum required, things are far less affected. However, in all honesty, people who go for a for a teaching qualification where it is emphasised that the lowest, if any, academic standards are required, and passing is basically a matter of paying shouldn't complain when they are not taken very seriously. If someone wants to be a teacher without a degree, without a working knowledge of the subject they wish to teach, much less an encyclopedic one, without anything beyond a few banal teaching techniques, then they shouldn't expect much because they don't have that much to offer. Cowboy schools will employ and exploit cowboy teachers. One qualification talks of salaries going from volunteer to $5,000 a month. Technically, it is true, though I'd be interested to know what percentage get the top amount, and even more interested in knowing how many people with their certificate earn that.

If you do take a course that requires no degree, that anyone can pass, that will not give you access to university jobs, colleges, primary or secondary schools or reputable ESL schools in your own country, then maybe it is a little naive to imagine that you have the passport to five grand a month abroad. A qualification that doesn't open many doors isn't worth much, though many charge a lot.