Summary: Foreign languages are no longer compulsory in Britain. 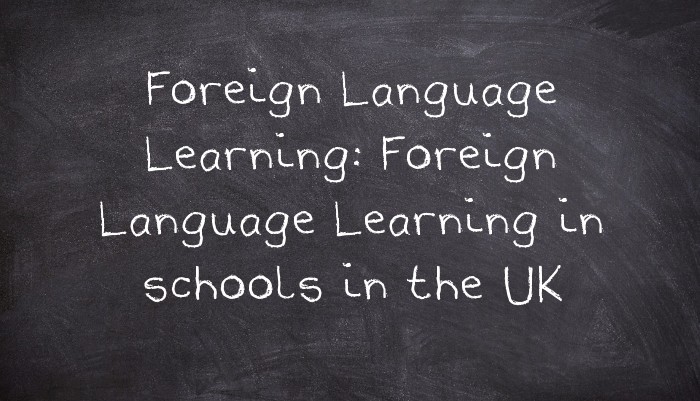 Foreign languages have always been a problem in the UK, but never more so than now. In an age where the monoglot is likened to the illiterate, government policy is confused and the results are worrying.

A few months ago, the government announced that it was planning to use untrained teachers from the newcomer communities to teach foreign languages in schools. The thinking behind this seems to be no more than that, as we have a large number of newcomers who would be grateful for the work, we could attempt to teach languages on the cheap. It doesn't suggest much thinking about which languages should be taught, nor about the quality of the tuition. Fortunately, this idea, like so many of the initiatives floated by the DfES, seems to have disappeared; many of their initiatives seem to be little more than an attempt to get something into the media that suggests they are working hard. Selection of foreign language is desperately important, yet at this stage they seemed content merely to have a cheap, untrained person with a command of any foreign language in the classroom.

Since then, sadly, things have got worse. Now, they plan to make the learning of a foreign language optional rather than compulsory. Even though we are members of the polyglot European Union and are in a globalised society, the government thinks that foreign languages are optional. There are calls for foreign langiages to be important but not examined.

An educational policy that changes every few months without any clear direction, and dropping standards, is not the way ahead. Even though English is the lingua franca of the world, teaching foreign languages is a vital part of education, yet it is being downgraded. It is impossible to state what the government policy is because it keeps changing; there is no clarity, no vision, just flapping around in thevain hope that something might work, just so long as it's cheap.