Summary: Does language shape thought? Like all the best debates, the argument over whether thought controls language or language controls thought is ultimately unprovable. 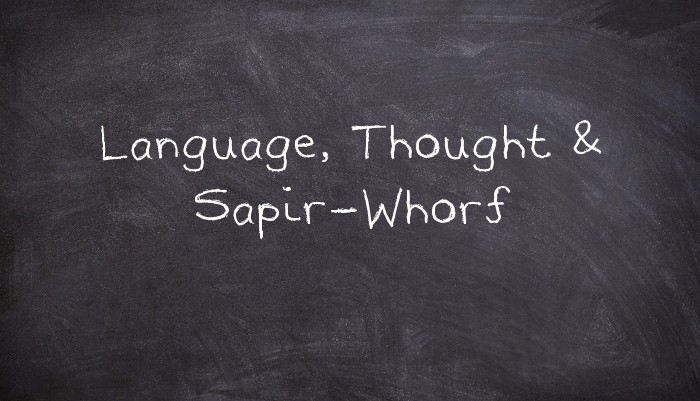 Like all the best debates, the argument over whether thought controls language or language controls thought is ultimately unprovable. To Dr Johnson, language was 'the dress of thought', to the ethnolinguists Edward Sapir and Benjamin Whorf nature is dissected 'along the lines laid down by our native languages. The categories and types that we isolate from the world of phenomena we do not find there because they stare every observer in the face; on the contrary, the world is presented in a kaleidoscopic flux of impressions which has to be organised by our minds - and this means largely by the linguistic systems in our minds. We cut nature up, organise it into concepts, and ascribe significances as we do, largely because we are parties to an agreement that holds throughout our speech community and is codified in the patterns of our language. The agreement is, of course, an implicit and unstated one, but its terms are absolutely obligatory; we cannot talk at all except by subscribing to the organisation and classification of data which the agreement decrees.'. This is known as the Sapir-Whorf hypothesis.

The Sapir-Whorf hypothesis has been the object of a serious and, at times, nasty debate. Whorf has been accused of being a racist and of distorting his evidence to fit his theory. One American educational course began with a discussion of whether these theories were racist. Interestingly enough, this was before any discussion of what the ideas were. Linguistic relativism has been given an unfair press because some believe it is the path towards suggesting that one language is superior to another. However, it would be hard to justify this by reference to their writings.

I think there has been too much concentration on elements of language such as the number of words used by the Inuit for snow. If language does control thought, it does so at a very basic level, shaping the possible structures of thought and not the individual instances. I think the Universal Grammar aspects of the question are more important here- thought is controlled by concepts such as negation, question, the order of argument leading to conclusion, justification, etc., and not by the number of ways of talking about a local weather conditions. Once language has superseded the non-linguistic thought processes of animals, then it imposes an inevitability of its own logic and, I believe, replaces anything that came before it- like overwriting an old operating system in effect.