Summary: Comments on 'Using ICT to share the tools of the teaching trade: A report on Open Source Teaching' February 2004, Becta 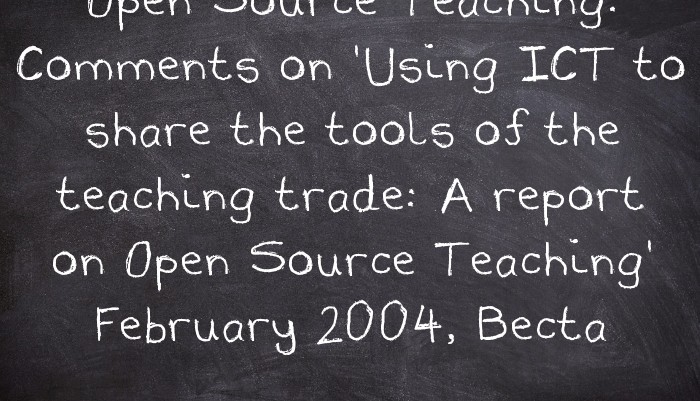 The full text of the Becta report is available by clicking here.

The report looks at Kaleidoscope, an LOR (Learning Object Repository) and is by Gillian Thomas and Matthew Horne of Demos, which is a "greenhouse for new ideas which can improve the quality of our lives. As an independent research organisation, its aim is to create an open resource of knowledge and learning that operates beyond traditional parties, identities and disciplines." (p2)

It is a study of "a distributed learning environment, served by a repository of rich learning-object-based content that can be adapted and integrated into local teaching and learning strategies."

Learning Objects are "reusable digital resources to enable learning." They are "bite-sized pieces of digital content." This will cover quizzes, printables, slideshows, spreadsheets, HTML pages, etc. The idea is to pool them so that they be joined up into greater chunks and edited and improved by teachers with access to the LOR.

The idea has many attractions- teachers don't have prepare in isolation, so duplicate work is reduced and the ability to edit offers scope for renewal and improvement. It also helps deal with the fragmentation that many LOs have- quizzes are easy to prepare and common, but often end up in lists without a coherent syllabus behind them. There are also legitimate worries that IT tends to produce small bitty discrete items and that this may have a negative impact on learning.

Working on the internet, I can see the appeal of the idea, but there are one or two areas that I do not think are sufficiently addressed.

The issue of copyrighted is highlighted for its financial potential:

Copyrighting learning resources, and especially electronic learning resources, can be a profitable business, with Thomas Telford School in Shropshire reportedly earning £2.5 million through sales of their online courses1. How the Government, industry and schools decide to deal with this issue will have a huge bearing on the style and uptake of LORs.
(p10- the source for the data about the School is 1 'Comprehensive sells online courses' BBC online, 21 February 2001.)

However, this is hard to reconcile with the vision of copyright for teachers:

Teachers tend to be passive consumers of teaching materials developed and published by corporations. Should teaching materials be developed that were free/non-proprietorial then the profession could take ownership and control over the development and production of the tools of their trade. This is essentially a libertarian view of informational transparency. The centre of gravity of this debate is around power relations, censorship, copyright and intellectual property and that LOs set knowledge free.

The authors suggest that an approach similar to open source software code should be used as means of encouraging teachers. I do agree that the centre of debate is about 'power relations', but probably arrive at a slightly different conclusion. It appears that teachers are to be asked to hand over their copyright, while making an asset that is held to have potential economic value. This seems contradictory to me; who is to make the money from this? This has far-reaching implications and the intellectually slight manner in which it is touched upon is vaguely insulting to the teaching profession.

The last sentence shows is one of those fatuous throwaway lines used to attempt to display open thinking, though there no debate in the minds of the authors. I am also worried about the introduction of libertarian ideas into the argument as if they were a readily accepted and desirable goal. Considering that libertarianism also advocates the abolition of laws about drugs, it is far from clear that these ideas should be pushed in education, not without a serious debate.

More muddled thinking is found elsewhere in the article, when they discuss "the role of more explicit incentives for contribution, which could take the form of continuing professional development or even financial reward." The word that interests me here is, of course, 'even'; why is it there? It suggests that the authors would rather that teachers worked for free after a libertarian goal of free information, leaving rich pools of educational resources for others to benefit from. It certainly suggests a grudging attitude to the most obvious incentive of all- employment is paid, and this is a huge job. I cannot help but worry about the financial aspects of this approach, which seem slanted away from the teacher. They talk about the huge potential value of the LORs, yet want them created for free by teachers fired up with their pitiful offers of professional development. Is there much surprise that they have to admit that their test version, the one where the halo effect is in full swing, was plagued by a very high number of lurkers (people using but not contributing)?

I also have misgivings about sentences like the following:

Teachers need permission both to believe that they are producers of good materials, and also that they can and should share their work with others outside their department.

Does a profession really need 'permission to believe'?

If they seriously think that this kind of language will work, then they are deluded. I would love to see either of the authors go into a staffroom and tell teachers that they are there to give them 'permission to believe'.

Making LOs on any scale is a huge and time-consuming task. To do this, teachers will need the skills, time and money. To suggest that a world-class LOR can be built by teachers in their free time because Demos have given them permission to believe is thinking at such a low level that it is hard to believe it gets published.

As a practising teacher who also works on the internet, I do have the skills required. I also would say that a lot of my colleagues do, or could easily acquire them where needed. However, there are serious problems. I'd say half were at a basic level- the ability to type, handle email and other routine tasks. They state the importance of 'developing a strategy for overcoming an 'anti-technology bias' among staff', but this is an over-simplification in my experience. There is certainly a rump of teachers who are determined to avoid IT at all costs, but this is diminishing. More important, in my opinion, is the quality of training being offered.

I have been on in-house and external training with a few colleges and it has ranged from irrelevant to acceptable, but most has been mediocre- often given by people who were a chapter or two ahead of the teachers being trained. Worse, I have seen some absolutely dire skills being passed on; one course I was sent on consisted of trainging teachers to make things that simply would not run on many systems because the trainer had so little idea of the internet.

I worry that the ambitions expressed in the report are unlikely to be realised because the skills required will not be universal. In practice, there are likely to be hotspots doing all the work and lurkers using it.

Schools and colleges are very competitive places nowadays- they compete against those near them and fight for places in the league tables. The idea that they are all going to work together on an LOR seems hard to accept. I have had absolutely no contact whatsoever with the colleges in the area where I work. Indeed, managers encourage us to see them as the competition, the yardstick against we are to measure our success. Ofsted comes in every 4 years (if successful) to inspect, with internal inspections every year to keep teachers on their toes. This is the atmosphere for many- it is not one in which collaboration will flourish. Experienced teachers are leaving in droves- I'm off this summer.

The authors report is based on too much wishful thinking in my opinion and the ideas range from unlikely (the collaborative element) to the insulting ('permission to believe'), with a dream that may sound wonderful to the person making the spreadsheet- getting the labour and copyright for free off gullible teachers in exchange for some professional development and libertarianism in our time. However, back on planet earth, it is most likely to be greeted with resounding apathy and left to wither on the vine like so many other ideas that sounds good at the time.

My recommendation to the authors would be quite simply to drop the patronising and insulting 'inspirational' tone, forget the libertarian nonsense and get down to the business of providing financial incentives for contributors and working out viable schemes for payment. Teachers are under huge stress with the burden of paperwork. Deskilling is a fact and classroom assistants are to be the cheap labour of the future. If the Demos crowd think that they can waltz into the middle all of this and give us 'permission to believe', then they have learned nothing while they composed this report.