Which is the most difficult language?

Summary: A look at whether one language can be said to be the hardest to learn 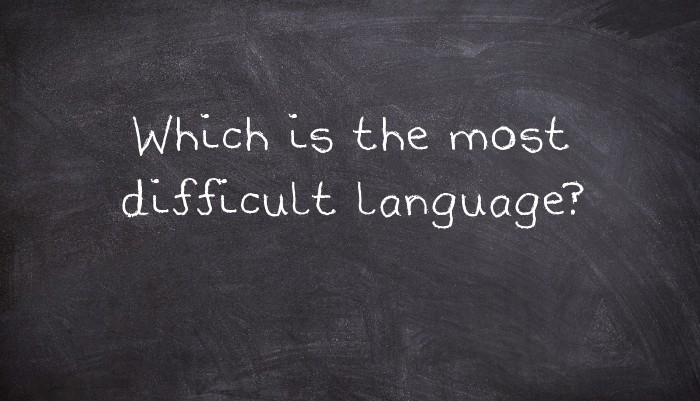 We are often asked what is the most difficult language to learn, and it is a difficult question to answer because there are a lot of things to take into consideration. Firstly, as a first language, or mother tongue, the differences are unimportant, so the question of how hard a language is to learn only arises in the area of second language acquisition.

A native speaker of Spanish will find Portuguese much easier to learn than a native speaker of Chinese, for example, because Portuguese is very similar to Spanish, while Chinese is very different, so first language is an important factor. the more different a language is from our mother tongue, the harder it will be to learn. Many people answer that Chinese is the hardest language to learn, possibly influenced by the thought of learning Chinese characters, and the pronunciation of Chinese does appear to be very difficult for foreign learners. However, for Japanese speakers, who already use Chinese characters in their own language, the writing will be less of a challenge than it will for people from languages using the Roman alphabet.

Some people can learn languages naturally and easily without much effort, while others find it very difficult, so natural aptitude for language learning is another factor. Teachers and the circumstances in which we learn also play an important role, as well as the motivation for learning. If people learn a language they need to use, they often learn it faster than people studying a language that has no direct use in the lives.

There is no single answer to this question; it depends on so many factors. However, the British Foreign Office has looked at the languages that diplomats and other embassy staff have to learn and has worked out which they find the most difficult to learn. The second hardest is Japanese, which probably comes as no surprise to many, but the language that they have found to be the most difficult to learn is Hungarian, which has 35 cases (forms of a nouns according to whether it is subject, object, genitive, etc). This does not mean that Hungarian is the hardest language to learn for everybody, but it causes British diplomatic staff, who are used to learning languages, the most difficulty. However, Tabassaran, a Caucasian language has 48 cases, so it would probably cause more difficulty if British diplomats had to learn it.

Different cultures and individuals from those cultures will find different languages more difficult. In the case of Hungarian for British learners, it is not a question of the writing system, which is alphabetic, but the grammatical complexity, though native speakers of related languages may find it easier, while struggling with languages that we find relatively easy. No language is easy to learn well, though languages which are related to our first language will be easier. Learning a completely different writing system is a huge challenge, but that does not necessarily make a language more difficult that another. In the end, it is impossible to say that there is one language that is the most difficult language in the world.