English as an International Language

Summary: Comments on English as an International Language, English Spelling, and Are Numbers Infinite? 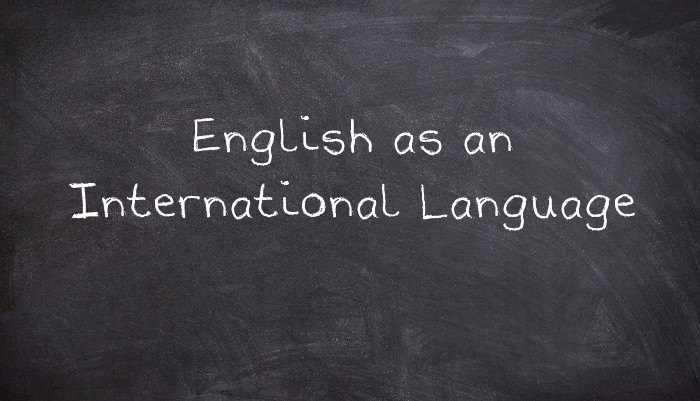 The status of English as an international language is long established and, for the foreseeable future, unlikely to be greatly challenged. However, I believe that to make it genuinely international, then one step in that direction could be to consider the influence of non-native speakers in a different light.

Generally, their non-occurent uses are labelled errors and they are encouraged to change to conform to the standard English model, even though many native speakers don't. I've heard the question 'what means' so many times now that I have decided to accept it as correct without question. I also can't feel too strongly about 'depends of' being used by so many European and other speakers.

Allowing a greater influence from outside will probably annoy the pedants, but it would be much more of an international language if it were able to absorb more such forms and allow them to coexist alongside the forms preferred by native speakers.

Someone has left ... umbrella.

There has been discussion here about which possessive adjective to use in the space above. Some argue in favour of a plural pronoun as a non-gender specific alternative to the 'sexist' pronoun 'his' and to avoid the extra words in a phrase like 'his or her'. Some have talked about using 'themself' as a neutral singular, which has been criticised as being contradictory and just plain wrong.

One point I would advance against the feeling that it is wrong to use a plural reference for something singular. Many languages do precisely this as a politeness principle, like the French use of 'vous', a plural, to speak politely to an individual. Given that the purpose of language is to communicate, I would suggest that if it is politer not to use gender specific terms, then there could be a case for allowing politeness to override the mathematical logic of number, just as so many other languages have done. I'd rank politeness as a more important concept here. Still, it's a question of what you're most comfortable with and I'll stick to 'themself' and other such words: each to their own.

It is possible to imagine the largest number known to humankind at the moment?

Take the smallest particle known to science, count how many there are, calculate their volume, etc. Having reached this number we have reached the end of our knowledge, not the end of numbers, which are infinitive state rather than infinite. When we find a smaller particle our number can grow. If we add one to our theoretical largest number, then we have something meaningless because numbers have no meaning unless they represent something.

'Seventeen' has no meaning of itself; numbers require a context. Therefore, while the potential to keep going is always there in numbers, just as language can keep adding new words, at any given point in time we could draw a line at the biggest number we know. Even recurring numbers and numbers like Pi at any given time are limited because somewhere there is Pi to the most decimal places, until the machine churns out the next decimal. Recurring is not the same as infinity and neither are numbers; you quite simply cannot count your way to infinity

Unfortunately, we have in many ways the worst possible scenario in English for spelling: we start with a language where the spelling and the pronunciation can differ or even bear little or no similarity and this is further complicated by the fact that American and British English are different, creating more possibilities and confusion.

To me, it would be logical to adopt the American spelling in the UK as it generally makes more sense and is closer to the pronunciation, although this sets me at odds with traditionalists who will claim the the British forms are right because it is the place where the language came from or that words like 'centre' are derived from the French. I can't say that this strikes me as particularly important, and I would prefer to use American spellings, but I rarely do as old habits die very hard.