Summary: A look at the profitability of the largest chain of franchises in Japan. 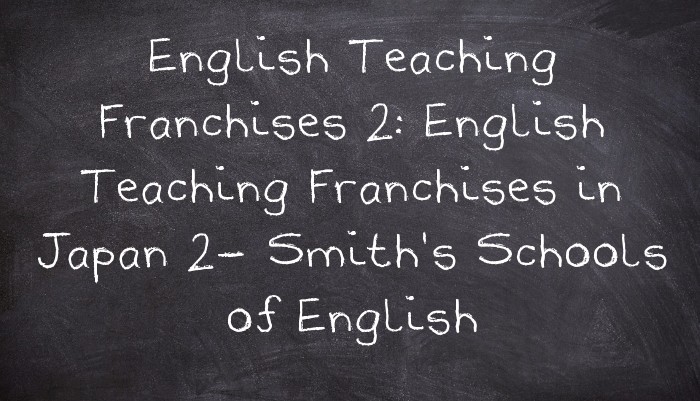 Certain areas of the ESL industry are serious causes for concern. The hagwon in South Korea have long been a source of horror stories and warnings have been put out at embassy level about them. The appalling state of many of the schools in the UK is also well-known. The debate about the franchise system in Japan is another, and quite a lot of it has been centred around the Smith's School of English, and it has been going on for a number of years. Not having worked there, I cannot vouch for the fruitier claims, though would feel that anyone thinking about signing up might be well-advised to check out the TEFL Blacklist entry on them or the Smith's School of English Watch site, whose sole purpose is to look in great detail at the aspects of the business that they consider unacceptable. There are also numerous threads about the company on forums like Letsjapan.org and Gaijinpot.com.

However, on the Smith's School of English website, there are some more figures that lead me to conclude that this is not an investment I would make. In their forum, they state that 10% of their schools are making over 12 million yen per year, which sounds healthy enough, and that over 33% are making 6 million yen a year. This is used for a discussion about bringing in new teachers, but I find the figures alarming. That figure for the 33% works out at ¥500,000 a month. Given their high costs, including royalties and monthly fee, which would be a little over ¥100,000, rent, utilities, any corporate tax, etc, soon takes it down to little, if anything, more than a teacher's salary in an eikaiwa (ESL Conversation school in Japan). In an article I wrote last year, I calculated that at least ¥400,000 a month would be necessary to generate an average teacher's salary, and that was based on a fairly low rent and excluding costs like utilities, tax and advertising, a hefty cost within the Smith's School of English system- flyers cost from ¥1.2 to ¥4.6 each.

The top 10% would appear to be doing well, but the third that are also heralded as successes seem, at best, to be making about what they could in a standard ESL job in Japan, which leaves more than half earning less than they could in an eikaiwa, but having paid at least ¥1,500,000 (about $15,000) to do so.

Companies will always try to present their figures in the most positive light, but if the most positive light that Smith's School of English can present is that over half have paid large sums of money to earn less than they could elsewhere, then I, for one, am not tempted to shell out. It comes in a piece where they are talking about expansion and recruiting teachers to help franchisees take holidays or grow their businesses, but to me a franchise system where a third are breaking even, a tenth are doing fine and the rest are in trouble or doing poorly doesn't come across as a particularly tempting investment.

One of the two Smith's School of English franchises for sale at moment, in Otsu City/Shiga, is a two-classroom school that was set up by Craig Drayton, the author of the expanded Smith's School of English curriculum, which, presumably, makes him one of the more successful members of the Smith's team. After all, something as fundamental and central as the curriculum should not be entrusted to an unsuccessful franchisee, and it was praised on the website as 'brilliant'. The school is making more than a teacher would in a typical eikaiwa: it is clearing ¥342,000 (about $3,400) after expenses and is priced at ¥6.5 million ($65,000). It is a two-room school, and there are no major competitors in the area. It has 25 hours' teaching a week on average and currently has 45 students. They say that is has room for expansion as only one of the two classrooms is being used.

I cannot but wonder why a school that has been open for seven years and has been run by a person trusted sufficiently to write the expanded version of the curriculum, and in an area where there are no major competitors, has not managed to fill the second classroom. A business that is based on a process of buying, building and selling should, in my opinion, have managed to fill the second classroom in seven years. 45 students doesn't sound that impressive either for seven years' work. If, after seven years, one of the brighter stars is only making an extra $1,000 (nearly) a month, then it does make you wonder what the majority who are earning less than the average ESL teacher in Japan are actually making. There could be good reasons for this lack of growth, but I would want to be very clear on them before sinking $65,000 into it.