Summary: ILT in learning English in schools and colleges in the UK. 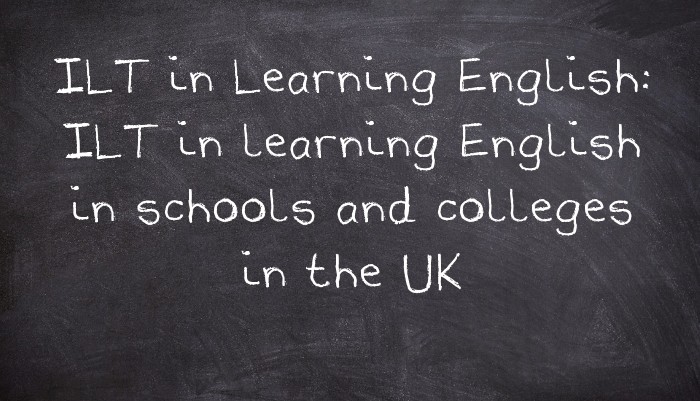 In a recent site blog entry, a number of criticisms were made of the state of ILT (Information and Learning Technology) and, while of the points most seem valid, I feel that the causes are worth looking at.

In the UK, ILT (Information and Learning Technology) is catching up, rather than dealing with 'forward thinking'. When Labour were elected in 1997, they kept their pledge, I believe, to ensure that all British schools were linked up to the internet. This means that the progress towards e-learning in schools and colleges was, in many cases, not in place as late as 1997. While the government's drive was very welcome, it showed that there was already quite a lag between education and business, etc, and things were to get worse.

As news that the government flagship site for e-learning at university level (UKeU) is up for sale comes out, suggests that there may be structural problems in the thinking that lies behind the government ILT policy.

Many of the schemes have been grandiose in conception, but have suffered from poor implementation. One idea a few years ago was to create 'ILT Champions', who would be beacons shining in colleges and raise the profile of ILT. Apart from the rather embarrassing name (rarely heard nowadays), the idea was not a great success. Many of the so-called champions lacked the IT skills necessary; in the rush to get things going, there was a lot of activity rather than targeted work, which continues today. They were also spread thinly.

Although there has been a vast investment in IT hardware, software has fared badly in many institutions. There has been an emphasis on software, like Hot Potatoes, which is either free or available cheaply if a licence is required. One problem with this software is that it is not database driven and results are not stored. It also tends to create exercises that are very similar in content and appearance, so things start to look predictable. VLEs (Virtual Learning Environments) have also been promoted, with varying degrees of success.

A major problem here, in my opinion, is the quality of training provided. I have attended a number of ILT training courses that struck me as inadequate. The Hot Potatoes course I was sent on consisted of a charge through all six types of exercise the program can generate, without really concentrating sufficiently to give the learners time to gain the confidence to use it well. In fact, the others on my course all admitted that they didn't really know how to use it at the end, and many other teachers in other places have had similar experiences. It is a sad irony that the quality of training given to teachers is often of a poor quality.

In many sites, there too few machines which have licences for programs like Macromedia Dreamweaver, even though educational licences are not that expensive (£50 per machine at present I believe). Also, updates are often infrequent or non-existent, so after the rush of investment, the schools and colleges are soon looking at dated software.

This policy, of spreading ILT Champions thin on the ground, giving teachers and lecturers insufficient training and limited access to rapidly ageing technology has, perhaps unsurprisingly, resulted in underachievement in the implementation of ILT.

Becta (the British Educational Communications and Technology Agency) recently published a report that lays out an ambitious plan to build libraries of educational resources (LORs- Learning Object Repositories), reusable digital resources. Behind the grandiose terminology, this basically means a collection of lesson plans, mostly in Microsoft Office format, especially Word and PowerPoint, with Hot Potatoes exercises, or at least that is what is currently available. They are starting to target things like metadata to make them more easily accessible in searches, though it is by no means certain that teachers and lecturers are being trained thoroughly in this, so many of the objects may continue not to have metadata.

What they are building is an exchange of worksheets on a national scale, which in itself is a laudable aim, but the approach recommended is flawed. The two key flaws in it that are likely to engender apathy are the aim to take copyright from the creators, which is necessary if learning objects are to be edited by other teachers, but loss of ownership will be unlikely to make people very keen. They also want to avoid paying people for their work, though admit that some financial incentive might be necessary.

With an approach like this, the LORs are unlikely to reach the heights aimed for, and even if they did, there would be precious little in the way of learning technology being developed. By not building teams, by not bringing in people of sufficient expertise and by laying the burden on overworked teachers whom they do not wish to pay, they are not laying any foundations, let alone sound ones, for the development of genuinely new IT ideas and methods, which is why an educational search in Hotscripts does not display a great deal of new thinking in software terms.

All in all, the problems with ILT stem from the fact that much of the work is simply typing, rather than computing, so the real power of the computer is not being harnessed. A few years from now I may be able to download a large selection of lesson plans and use them, as opposed to the rather flimsy selection available on official sites at the moment, but that is likely to be all, and even that is not certain. The growth of LORs will be pressed to match that of internet sites, where there is an explosion of sites, mostly set up as hobby sites by keen and dedicated teachers, so I am far more likely to turn to Google for help than the official systems being set up at the moment.

The real shame and waste is that the dedication shown on the internet is not being harnessed by the education system here in the UK. One of the core reasons, I believe, is the question of ownership- people are prepared to work endlessly at something that is theirs, but not so willing to work unpaid for something that isn't. It rather reminds me of the problems of land ownership in the Soviet Union, where peasants worked far harder when they owned the land.

In the area of English language learning, the construction of resource banks is welcome, but there is an element of duplication because the internet is already full of sites offering many similar resources. However, centralised repositories based around the national ESOL curriculum will be more focused and reflect its demands.

However, new technologies for learning are an area in ESL and ESOL that are not really being developed. Concordancers, which have shown their worth in the creation of dictionaries like COBUILD, and are used by most lexicographers nowadays, are still not in common use in education. The new insights gained have made little headway.

On the contrary, one of the consequences of ILT in English language learning has been a resurgence of dated methodologies. Ellis uses IT to offer video based lessons that do resemble the largely discredited Direct Method, or Army Method, where rote learning of basic and sometimes artificial formulas is meant to be a path to understanding the true complexities of a language, though it does also feature situational lessons that are more relevant to newcomers living in an English-speaking society.

Because IT lends itself well to such methods, as they can predict single 'correct' answers, normally by restricting choice to an excessive degree, they can be made to work in an ILT environment. To a certain extent most of us are guilty of this- the quizzes on this site can be criticised on these same grounds.

Since the emergence of concordancers, however, there has not been a great deal in the way of other applications of technology designed to aid comprehension of language, tools to help students analyse language. This is a pity, because there are many possibilities for language learning tools that could be used in ILT for English language learning, but so far they are thin on the ground. The student is currently spoiled for choice if they want exercises and explanations, with the promise of more, but for the internet generation, used to exploring, there is very little they can use to navigate their way through English.