Summary: A look at whether language polls can reflect usage and help ESL learners. 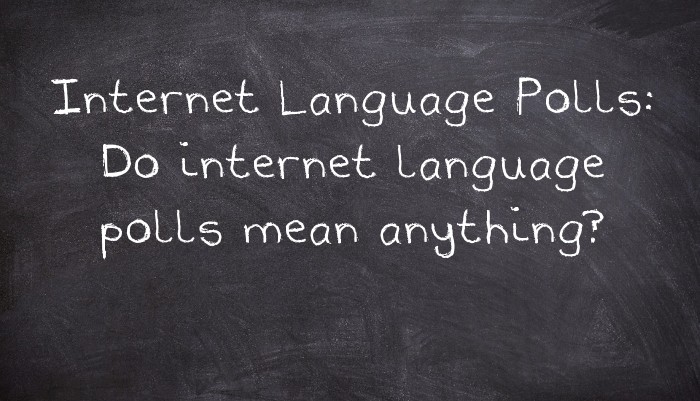 Many language sites use online language polls, either on site pages or in forums. Recently, someone posted a comment in one of ours asking why we have them, and I recently read a discussion in a forum about their validity. There are a number of issues about polls that are worth bearing in mind.

I had already put up a poll asking whether they had any meaning. Statistically, the numbers suggest that voters think they are, with just under 75% saying they do. However, and here is one of the key issues, the sample size is very small. The largest poll we have at the time of writing has about a thousand votes, and most language polls, especially those in forums that get buried in a matter of days by new threads, generally have relatively few votes.

However, a small number of votes doesn't necessarily mean that they have no validity. Over 90% agree that I have known her .... ages should be completed with for rather than since. This is a decidedly uncontroversial question of English language usage and a large proportion voting one way can be taken as an accurate view.

This site, like all ESL sites, will also have a sample bias as a large number of visitors are teachers and most of the rest are non-native speakers. In our poll on whether people say if I were or if I was, about two-thirds have chosen were. As both forms are correct, this is not a question of right or wrong, but that proportion does not necessarily reflect usage patterns throughout the native speaker population, where the numbers using was would probably be higher. Many teachers prefer the more formal use of the subjunctive here rather than the indicative, and many students are taught to use it. The poll is not giving out incorrect information, but it would be wrong to extrapolate too much from this and think it a picture of wider usage.

Sometimes the questions in polls have design flaws- they do not include all possibilities, sometimes by accident and other times by design, especially where the poll writer wants to see a particular result, or simply for fun, as in this meaningless poll.

One ESL forum I visited recently complained about multiple voting. On our site forum, multiple voting is virtually impossible as system only allows one vote per member, though many systems allow multiple votes. The polls that appear on our Student and Teacher pages are only susceptible to this if a person sees the same poll time some time after the originally voted, but as random polls from a huge selection are presented the chances are greatly reduced. If someone tries to vote a second time, they will not be allowed to, but if they tried again a few days later, they would be able to. Our Language Poll section keeps the polls forever and presents them randomly, so over time the effect of multiple voting is minimal.

We do not have polls because they believe that they will present an utterly accurate picture of usage, but because any time the page is opened, they throw up a random question about language that may well give the person viewing the page something to think about, and the fact that the votes are climbing steadily each day suggests that they are performing that function. Additionally, the information they provide can show correct answers where it is a simple correct/incorrect choice, even with a small number of votes cast, and can indicate some trends and patterns of usage, though the data should not be given too much weight. Some polls are simply designed to provoke thought- my answer to this one might change from day to day. Overall, I think they are useful things, as long as too much emphasis is not given to the results, and I like them.