The 100 most useful abbreviations for EFL learners

Summary: The most important short forms for people learning English as a foreign language. 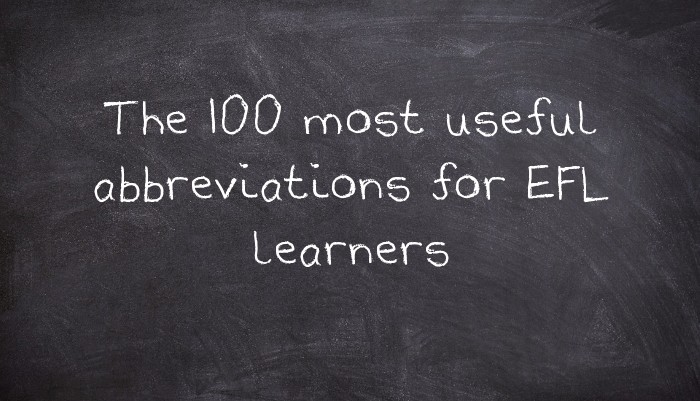 This is a list of the most useful English short forms for people learning English as a second language. It includes vital English teaching jargon, informal expressions, written abbreviations, etc. There will also be a similar list of the 100 Most Useful Acronyms for EFL Learners on this site from October 2018.

cuppa – a cup of tea

e.g. – for example/ for instance

enc. – enclosed (like “attached” but meaning inside an envelope)

’fraid not – I’m afraid not

i.e. – in other words/ that is to say/ to put that another way

lb – pound (weight, from the Latin, as seen in “libra” and “libre” in modern Romance languages)

memo – memorandum (a group email, usually telling people what to do – not a note/ notes)

p – penny or pence (British money, one hundredth of a pound, like cents are for dollars)

pp – pages/ on the behalf of

re: – regarding (meaning “concerning”, “about” and so not only used to mean “reply”)