How to teach Latin abbreviations

Summary: How to present and practise English abbreviations that come from Latin such as "e.g.", "i.e." and "PS" 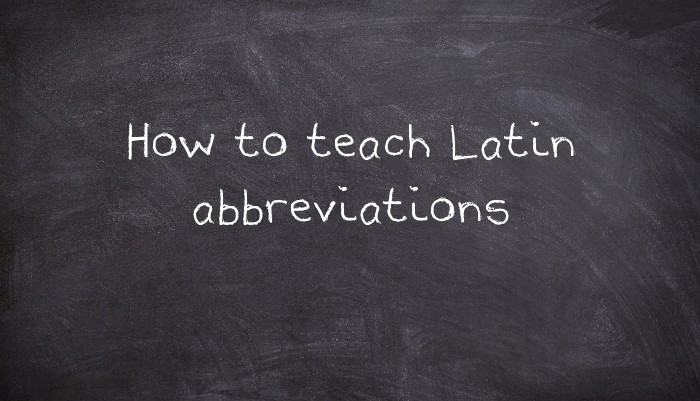 The most useful abbreviations for students to learn are often not abbreviations of English words but instead ones like “e.g.” and “etc” that come from Latin words and phrases. Teaching such phrases can help student avoid mistakes like using “ex.” for “for example” and using strange punctuation to make important information stand out when they could simply write “NB”. It can also be a good opportunity to teach some useful equivalent English phrases, such as “for example” for “e.g.” and “Please note that” for “NB”.

What students need to know about Latin abbreviations

Things you could mention when teaching Latin abbreviations include:

I wouldn’t bother trying to teach any rules on how to use capital letters and punctuation in Latin abbreviations. Rather I just ask students to memorise them one by one and refer to a dictionary or style guide when they aren’t sure. Even when you’ve removed that point to teach, the list above is far too much information for most students and for most Latin abbreviations, so you’ll need to carefully choose what information to present. In particular, you’ll need to decide what to do about the longer Latin expressions, with the main alternatives being:

Just using the closest English phrase (e.g. “that is to say”/ “in other words” for “i.e.”), without mentioning what the longer Latin phrase is

Giving the full Latin phrase and its word for word translation (e.g. both “post meridiem” and “after midday” for “pm”)

Latin abbreviations which are most worth teaching

This is a list of the Latin abbreviations which I’d be most likely to teach or at least mention to my students, with the just information which I would probably present (less important and confusing information being left out):

Although I don’t have any evidence for this, I also tell my class that “fig.1” must come from Latin for “figura 1” or something. This is to stop them using “figure” to mean diagram/ chart/ illustration, because “a figure” actually means “a (single) number” in English, as in the expression “Tell me some figures”, which doesn’t mean “Tell me some diagrams”.

Other Latin abbreviations that might come up in more specialist classes include:

There are also some useful expressions which (probably) come from Latin but which also have longer English versions, meaning that it is probably isn’t worth mentioning their Latin roots, such as:

I would also say that “versus” and its shorter versions “v” and “vs” have now become (spoken and written) English words, meaning there is no need to mention their Latin roots. However, if you want to make a whole lesson on Latin abbreviations and are short a couple, there is no harm in also including one or more of these. Another possibility is to do a lesson on abbreviations more generally. For example, I often mix up Latin abbreviations with other shorter and/ or more informal forms such as “ASAP”, particularly when teaching emailing or academic writing.

How to present and practise Latin abbreviations

All the activities below can be used at the presentation and/ or practice stage of a lesson, perhaps with more help if it’s a presentation stage.

This is perhaps the easiest task to set up and do. Each abbreviation is given with one or more longer English expression, but with the English words mixed up. For example, if the first question says “e.g. – an for for example example give instance to”, the students need to put it back into order as “e.g. – for example/ for instance/ to give an example”.

A difficulty of teaching English abbreviations like “BW” for “Best wishes” is that matching up abbreviations and long forms is much too easy and so doesn’t help make the language memorable. Luckily, with Latin abbreviations, being too easy is never a problem! My favourite presentation activity for Latin abbreviations is therefore to get students to match up “i.e.” with “that is to say”/ “in other words”, “etc” with “and so on”/ “and so forth”, and so forth. The simplest way to set this is up is to give the abbreviations in sentences like “The first known toilet was built in Ca. 500 BCE” and ask students to match them to the longer expressions like “approximately” at the bottom of the page. If that would be too easy, you could give the longer forms in a long string or words which hasn’t been split into expressions, as in “figure per year in the morning for example for instance”. If students are likely to need help, you could give them the longer Latin forms and/ or literal translations to aid them after they have tried it with no help for a while. After checking their answers, you could test them on their memory of what they just matched up, e.g. trying to replace longer phrases in context with some Latin abbreviations, this time without any help.

If this task is likely to be too challenging and/ or you don’t have time to or don’t want to give context for the expressions, another possibility is for students to match up the abbreviation plus another way of putting it with another longer form on the other side, e.g. “etc/ and so forth” on one side with “and so on/ amongst other examples” on the other.

Matching Latin abbreviations and longer English expressions like “PS” and “by the way”/ “just one more thing” can also be done as a pairwork speaking activity, either at the presentation stage or practice stage. Make a Student A worksheet and a Student B worksheet with the longer version on one worksheet and the Latin abbreviation on the other. Put both forms in context but in different sentences, e.g. “When I finish my Master’s I want to take a break before I take my PhD” on the Student A sheet and “It took me six years to finish my doctorate, but I couldn’t find a job in academia when I finished it” on Student B’s. Mix up the sentences on one of the worksheets to make the matching task more difficult. In pairs, students try to match up the abbreviations and longer English expressions, first of all with no help and then reading out their whole sentences to help check from context. The whole task should be done without them showing their worksheets to each other, but note that this might mean students having to pronounce some abbreviations which are only usually written, something that might be worth mentioning later in the lesson.

Give groups of students different Latin abbreviations with some true information about each such as:

There are several dictation-like activities which work well with this language.

This task can also be done with students dictating, perhaps in pairs and/ or with texts that students have made up themselves.

The Add the Abbreviations Dictation activity above also works the other way round, with students listening out for abbreviations and writing down the longer forms from a list to add to the text later. Note that with this variation it is much easier for students to spot the bits which need replacing during the dictation stage, but students will need some time to write the longer expressions.

This task is similar to the ones above but with less listening power and thinking power involved. Students are given a text with the expressions all in full and listen to the teacher or a partner read out the same text but with things replaced by Latin abbreviations. The first time they listen, they only underline the bits which are different in the two texts. After working with a partner to try to remember the abbreviations that they heard, they are given a list of mixed abbreviations and/ or listen again to check. After checking their answers, they are then given a text with the abbreviations in and have to remember the long versions from their first text. You could then move onto asking them to remember short or long forms without any context etc to help.

Prepare cards with abbreviations on one side and full English forms on the other, preferably in example sentences, especially if students don’t know the expressions well yet. Students spread the cards across the table, either side up. One student tries to guess what is on the other side of one card then turns it over to check. If they are right, they leave the card that way up (the opposite way to how it was before they guessed it) and try again with other cards. When they make a mistake, that last card goes back to the same way as before and play passes to the next person. The next student can do the same with the same cards as they saw being attempted by someone else, other cards which haven’t be tried yet, or probably a mix of the two. The winner is the person who has the longest string of uninterrupted correct guesses during the game, e.g. ten correct guesses in a row the fourth time that it was their turn.