How to teach much, many, a lot, etc

Summary: How to present and practise quantifiers of large amounts and large numbers, with both adults and young learners. 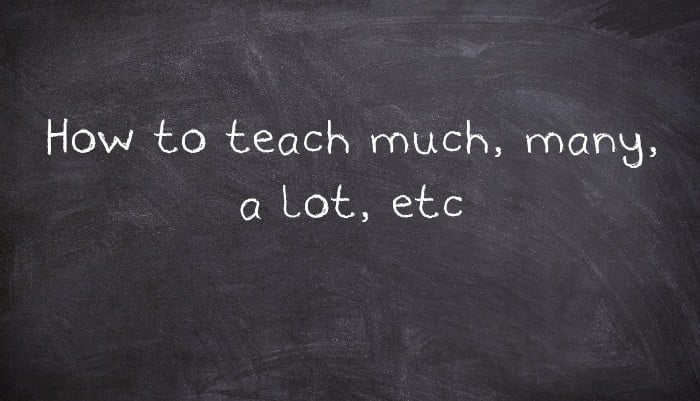 Even very young and low-level students can quickly get used to asking “How many…?” and maybe “How much…?”. However, using “much” and “many” in positive and negative statements is far more difficult than asking the right questions, not helped by the fact that there are ways of using them that are rare but not exactly wrong. “A lot (of)” is much easier, but for some reason less often practised in school English lessons.

As students go up through the English levels, they will then come across other forms that are similar to “a lot of” such as “loads of” and “tons of”. Other expressions used the same way as “a lot of” include, in approximate order of when I would present them:

There are also quite a lot of even more informal alternatives to “lots of” that students might come across in movies etc, but quite a lot of these contain actual swear words so are probably not suitable for class. In contrast, “a considerable number/ amount of” and “a substantial number/ amount of” are often used in formal contexts such as academic writing as understated ways to say “a lot of”.

What students need to know about much, many, a lot of, lots of, etc

As I mentioned above, I tend to start with the questions “How many” and maybe “How much” before moving onto “many” etc in statements. The first thing that students will need to know is that “How many” goes with plural countable nouns in questions like “How many brothers and sisters do you have?” and “How many bus routes are there near here?” This can be practised for weeks, months or even years before “How much” is introduced, especially with (very) young learners. In order to make them ready for the future contrast with “How much”, I always use picture prompts, realia etc with more than one object (multiple grapes, seven cats, etc) to elicit “How many” with plural nouns, and correct “How many car?” X etc quite often.

Even from this very early stage, it is also possible and useful to get students using “many” to mean “a lot”. Perhaps the easiest way of introducing this is by counting up on your fingers more and more quickly until you all lose count, then saying “many” (“One, two, three, four, five, six, seven, eightnineteneleventwelve, many!”, etc). The same would also work with “A lot” or “Lots”, something that would help more to prepare students for mainly using those kinds of expressions in positive statements.

“Many” can also be taught or revised in a lesson on opposites as the opposite of “one”, as in the Robert Crowther book “Opposites” (along with “up”/ “down”, “happy/ sad”, etc).

“How much…?” can only be properly explained when you are ready to present the uncountable nouns which it always goes together with, in questions like “How much money do you have?” and “How much time do you spend doing homework?” You’ll also need to be ready to present “a lot of” if you want them to also use the word in their answers. This is because “I have much money” sounds strange (despite what some more traditional grammars might say), and may even be misheard as the much more common negative sentence “I don’t have much money”. Instead, we usually say “I have a lot of money” (or “I have lots of/ loads of/ tons of/… money”). The good news about this seeming complication is that “a lot of”, “lots of” etc can be used with both countable and uncountable nouns, in positive and negative sentences, and in yes/ no questions, making “lots of” the safe choice for students who are not sure whether to use “many” or “much”.

To summarise the patterns used with each quantifier:

You can also summarise which quantifiers go with each kind of noun:

The contrasts between “many” and “much” are therefore:

This last contrast explains why we can say “many many many + noun” to mean “so many” in sentences like “I have many many many doubts about this”, but not “much much much + noun” (so not “I have much much much advice for you” X). Confusingly, “so much”, “too much” etc are fine in positive statements (presumably because we can’t say “too lots of” X, etc).

When it comes to distinguishing between “a lot of”, “lots of”, “loads of”, etc, the difference is usually just one of formality, with “lots of” slightly more informal than “a lot of” and the others in varying levels of formality below that. However, some phrases which look similar like “a whole bunch of” and “legions of” only go with countable nouns, perhaps because of their literal uses to talk about (countable) flowers and soldiers.

The other contrast that can be left until later is that between “many people” and “many of the people”. This may come up in student questions, in which case you can tell them that it is simply an example of the common uses of plural nouns with no article to make generalisations (“I like bananas”, meaning all bananas) and “the” to mean specific things (“Can I borrow the car?” meaning the single family car, etc).

Typical student problems with much, many, a lot of, etc

How to present much, many, a lot, etc

As mentioned above, long before you present this language you should be able to get students used to asking and answering “How many…?” questions, perhaps just starting with “How many chairs?” before moving onto the typical patterns “How many… do you have?”, “How many… have you got?” and/ or “How many… are there?” You will probably also find that students want to say “many/ a lot” in their answers, particularly if they ask each other about very large numbers such as how many comics they have. As explained above, this can be presented and elicited by counting faster and faster until the words just become “blblblblbl” and then saying “many” or “a lot of” as you move your fingers rapidly up and down many times.

I’m not sure about the value of translation when it comes to this grammar point. All languages that I’ve tried to learn have had words that mean more or less the same as “many/ much/ a lot of/ loads of”, but none of them have had the same contrasts as in English (understandably, given how random it can seem in English!) It is also easy enough to explain these questions, large numbers and large amounts in other ways.

Because of the differences in formality, it’s quite difficult to think of a single text that higher levels could use to learn “stacks of” etc, except perhaps a piece of academic writing that someone has made much too informal. This could be an actual essay that students correct and/ or a dialogue between a teacher and a student on how you can’t say “sh** loads of” in writing for university.

How to practise much, many, a lot, etc

There isn’t much practise you can do with just “many”, “much” and “a lot of” without bringing in “some”, “quite a lot of”, etc, so see the article on this site on teaching quantifiers more generally for ideas on that. In particular, there is little point trying to design an exercise where students have to select from “many”, “much” and “a lot (of)”, as almost all gaps can take more than one of those. However, there are quite a lot of games you can play at the earlier stages leading up to the presentation, and a couple of practice activities that you can use for this specific language point.

Games to practise just “How many…?” include:

If you also want to practise “many” or “a lot (of)” in the answers, it’s best to decide exactly what number you will define as “many”. For example, you could decide that in the game that you are playing, students must count or guess numbers up to 20 exactly (maybe because that is the highest number that they know in English) and after that they can just say “many” or “a lot”.

Perhaps the only activity specifically for “many” and/ or “a lot” in statements is students trying to brainstorm true sentences like “There are a lot of spoons in your house”. This could perhaps also include negative statements like “There aren’t many beautiful parks in this city”. This could also be a smooth way into uncountable nouns with “much” and “a lot”, as students will probably sooner or later make a mistake like “You have a lot of knowledges about English” X.

When you have presented all of “(how/ not) much”, “(how/ not) many” and “a lot of”, that could be practised with a drawing game where students draw large and small amounts and quantities of things for their partners to guess. This could also be made into a coin game, with the first flip deciding if they should draw a plural noun (heads) or an uncountable noun (tails) and the second flip deciding if they should draw “a lot of/ many” (heads) or “not many/ not much” (tails). If you want to then expand their range of quantifiers, similar drawings could then be used to present “some”, “(a) few”, “(a) little”, etc.