How to teach too and enough

Summary: Teaching tips for too, too many, too much, enough and not enough, including too and enough games. 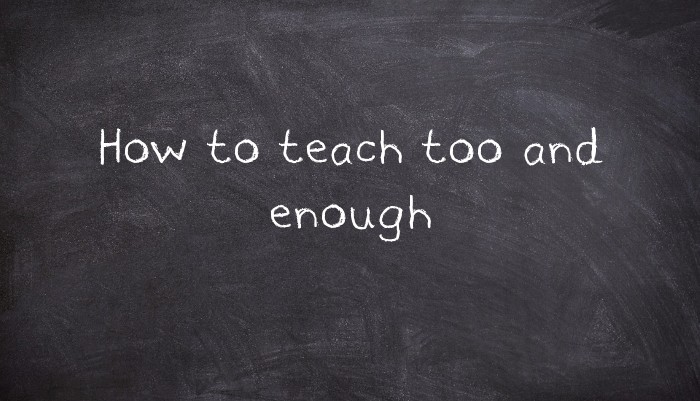 Even very low-level students often want to express the ideas included in “too” and “enough” and so can really benefit from a basic introduction to these words. There are also enough complications with and different uses of these words to make them well worth going through at higher levels. This article runs through what students need to know about those two words, typical issues with learning and using them, presentation methods, and practice activities.

What students need to know about too and enough

To be able to use “too” and “enough”, students need to know the connotations, meanings (including synonyms and opposites), word order, and collocations. They should also have already been introduced to “many” with countable nouns and “much” with uncountable nouns in an earlier lesson if you want to cover both “too many” and “too much”.

Connotations of too and enough

“Too” and “not enough” are usually negative, and “enough” is usually positive (but see below for exceptions in common fixed phrases).

Meanings of too and enough

Possible explanations for the meaning of “enough” include “the right level”, “the minimum that you need”, “sufficient(ly)”, and “adequate”. “Not enough” is therefore “less than the minimum”, “less than you need”, “insufficient(ly)”, “lacking”, etc. “Too” can be explained as “more than is useful”, “over-…”, and “excessive”. However, most of these explanatory words are more advanced language than “too” and “enough”, making them only useful for students whose languages have very similar words (e.g. “sufficient” for Spanish speakers). See the presentation ideas below for other ways to explain the meanings.

Word order with too and enough

Other uses of too and enough

Perhaps the use that is most likely to come up after the basic ones above is “too” and “enough” with adverbs (in “You’re running too quickly”, “He isn’t running quickly enough”, etc). “Too much” and “enough” are also commonly used after verbs, in sentences like “I sleep too much” and “I don’t work out enough”. I find that students can usually spread the use with adjectives to adverbs naturally without any extra presentation or practice, and the use with verbs is at least easily understandable. However, if you aren’t going to actually present the uses with adverbs, verbs, pronouns (“enough of it”), etc, you’ll need to make sure that the presentation text and controlled practice sentences only include adjectives and nouns (including checking that the textbook doesn’t mix up the uses, as they sometimes do).

Collocations with too and enough

With all of the uses, students will need to get used to using “too” and “enough” with infinitive with “to” (“too fast to catch”, “work out enough to lose weight”, etc) and possibly “for” (“Not sweet enough for me”, “Big enough for even a big boy like you”, etc).

In common with many other quantifiers such as “some (of)”, “too many/ much (of)” and “enough (of)” need “of” before determiners to talk about specific things, as in “Enough of my friends” and “Too many of the top ten”.

From around Intermediate level, students should also be able to add intensifying adverbs like:

They may also come across some fairly common fixed phrases with too and enough like:

Many of these illustrate that “enough” can sometimes be a bad thing (in “Enough!”, “I’ve had enough”, “Enough of your cheekiness already”, etc). “Too” can sometimes be used to say something positive (“You are too kind”, etc). However, in my experience the equivalents in my students’ languages are also used in that way, so those opposite uses shouldn’t be too much of a shock.

Typical student problems with too and enough

In some languages the equivalent verbs (similar to the English verbs “suffice” and “exceed”) are more common than the quantifiers, so students may struggle to convert what they want to say into English. In a similar way, in some languages an affix like “over-” is used more commonly than a word like “too…”, so students might over-use “over-dark”, “over-big”, etc.

The problem that all nationalities have is the strange fact that “enough” goes after words such as adjectives, in a way that is extremely unusual for English determiners and quantifiers. I haven’t managed to find an explanation for this (even a historical one), so students basically just need to get used to it. This is perhaps easiest with the negatives, as the negatives are the different forms “not enough…” and “not… enough”. It may also help to show that it’s worth the effort to get it right, as mistakes can cause confusion in pairs like

How to present too and enough

It’s quite difficult to know when to present this grammar, as students will need to have already covered uncountable nouns in order to know when to use “too much”, but “too” and “not enough” can go with very basic adjectives like “big” and go well with the topic of opposites.

With lower levels, you’ll need to decide if you want to present “too (much/ many)” and “(not) enough” together or separately, with “too” being much easier to present first if you do decide to split them up.

You’ll also need to decide if you want to first present “too” and/ or “enough” with nouns or with adjectives. The advantages of starting with nouns is that the meaning is easy to illustrate with pictures and realia (with a number of chairs and people, etc), that it ties in well with grammar which is usually in the same level textbooks like “There is/ are…” and “I have…”, and that the word order is unsurprising. Perhaps the only disadvantage is that once students get used to saying “not enough…”, it will make them even more likely to say “not enough old” X later on.

Textbooks often present this language with a dialogue of people shopping before something like cooking or a party, and that generally works fine. The text should start with the target language used in context and in the patterns that you want them to use later such as “We don’t have enough butter for the cake. We need a kilo of butter but we only have ten grams” and “There are too many people to share one fondue. About five people could share one fondue, but nine people are coming”. If possible, the text should then move onto using the language more naturally without extra context (“These plates aren’t big enough for all those starters”, etc).

After doing some comprehension tasks, students can find the language which means that there are problems and no problems with butter, fondue, etc. They can then find the other problems and no problems which are mentioned and make up example numbers, amounts, sizes, temperatures, etc that illustrate the situation, e.g. that the plates are 15 centimetres but need to be about 25 centimetres.

Between those two stages, you could elicit translations into their own language(s), but this doesn’t necessarily help if the grammar of the translations is different, e.g. if “too” is a suffix (as in Japanese). English explanations like “sufficient” and “over-” can also be confusing, so I tend to skip an actual presentation of this sort. However, students can work out which kinds of words go with “too many”, “too much”, “enough…”, “… enough”, “not enough” and “not… enough”, and how to make synonyms and opposites with these expressions.

Like many textbooks, I then tend to use pictures of overflowing bowls, hungry-looking people with tiny meals, etc to match to or elicit example sentences, synonyms and opposites. This helps make up for a lack of definitions of the words and links naturally to the practice tasks.

How to practise too and enough

Too and enough Pictionary

Students draw “His bicycle is too small (for him)”, “There are too many computers (on his desk)”, etc for the other students to guess. After drawing the example sentences that you give them, students could also make up their own, perhaps based on suggested nouns. They could also secretly roll a dice to decide if their next drawing should illustrate:

Note that there will always be alternative sentences that mean exactly the same thing and so should also be accepted as guesses. For example, if a student draws “His bicycle isn’t big enough (for him)” and their partner says “He is too big (for his bicycle)”, that should be accepted.

Too and enough discuss and agree

To help with discussion using this language, students can fill gaps in sentence stems that have “too” or “enough” in like “The government should do something about too ________________” and/ or discuss the right level for things such as the retirement age (which should also bring up the wrong level in their discussion).

Too and enough synonyms drilling games

One student says a sentence with “too” like “too dark” and their partner should respond with a phrase with the same meaning with “enough” like “not bright enough”. If you want to score, the first person could get a point if their partner is too slow or is wrong (but only if they can think of the equivalent phrase, not if they set impossible challenges!) This game can be made more rapid and more fun by students clapping three times between each prompt and answer and the next prompt. If you have enough room in the classroom, you can also do it while hitting a balloon back and forth.

Too and enough reversi

Particularly if you also want to focus on adjective opposites, drilling synonyms can also be done as a memory game. Make cards with “too” and “enough” and opposites so that both sides mean the same, e.g. “too small” on one side and “not big enough” on the other, making sure that the adjectives match your students’ levels (and maybe the topics in the textbook). Students spread the cards across the table. The first player chooses one card, tries to guess what is written on the other side, and can leave it turned over and try the next one if they are right. They stop whenever they make a mistake, then the next person tries, probably doing a mixture of the same cards but in the opposite direction and new ones that no one has tried yet.

Too and enough in fixed phrases such as proverbs and quotations

Especially if you weren’t able to give a definition that they could write down of “too” and/ or “enough”, it can be good to start the practice with some more work on example phrases. Famous sayings like “You can’t have too much of a good thing” both provide good examples and are useful fixed phrases to learn. After discussing which phrases give the best advice, which phrases they already knew, which phrases are similar in their own culture, etc, students can do other tasks such as putting mixed up proverbs back into order (making for useful practice of word order with “enough”).

Examples with nouns and adjectives include:

With other grammar there is also: