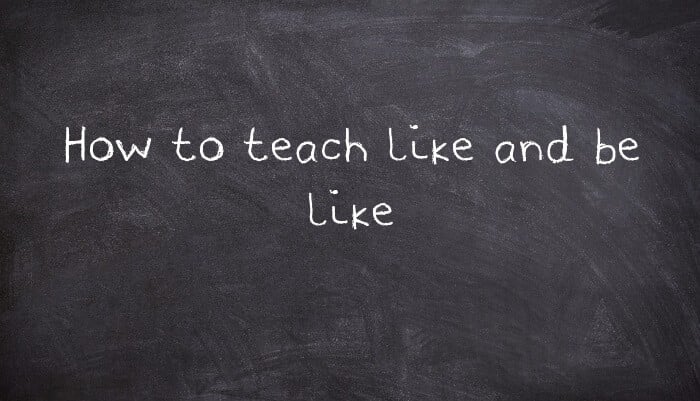 The distinction between the verb “like” in “What do you like about it?” and the preposition “like” in “What is it like?” can be one of the most confusing language points for students, not least because the two kinds of “like” have nothing in common except being homographs. It might therefore seem strange to ever teach “like” and “be like” together. However, you’ll need to contrast the two forms to explain how the preposition is used differently, they often come together in textbooks, and they also occur quite naturally together in topics like describing food and talking about holidays. This article therefore gives tips on how to present, contrast and practise the two forms in the same lesson. There are also articles on this site on other uses on the preposition “like” such as with verbs of senses.

The first use of the preposition “like” that students should come across, probably without learning that it is a preposition and perhaps without any explanation at all, is in the very common question “What is… like?”, as in “What is your new boss like?”, “What’s the weather like?” and “I’m thinking about ordering this. What is it like?” This question is simply a much more casual and natural way of asking “Can you describe/ explain…?” For example, “Can you describe your new boss?” would mean the same as “What is your new boss like?”, but sounds more like how a police officer would speak. “What is… like?” questions are similar to “How” questions such as “How is the weather?”

The next step after bringing “What is… like?” into class might simply be to expand that to include similar questions such as “What are… like?” and “What was… like?” Rarer forms like “What has… been like?” and “What will… be like?” are almost certainly unnecessary at this stage (but great if students can come up with them on their own).

Students who have been taught that “What is/ are/ was/ were… like?” means “Can you describe…?” should naturally find that answers to the question rarely include the word “like”, as in “What is the city like?” “It’s often rainy but is warm and dry in summer". Answers that do have the preposition “like” such as “It’s like Paris, but a bit windier” show the general meaning “similar to”, as in “It’s similar to Paris, but a bit windier”. This can also be seen in questions such as “Who is he like?” and “Which one is most like the one that you lost?”

In common with other uses of “be”, the negative of “be like” simply adds “not”, and in the question “be” moves before the subject, as in “He isn’t like his twin” and “Is this bedroom like yours?” In common with all prepositions, “like” is usually followed by a noun (in “This is a tyre for bikes” and “This is like Christmas pudding, but…”). Also like other prepositions, it can also be followed by v+ing, although examples like “It’s like having your cake and eating it” are less common and higher level than simply “It’s like a marshmallow”.

As well as meaning and grammar, we can also look at collocations. Some words go with both, as in “I really like…”/ “It’s really like…” and “I quite like…”/ “It’s quite like…” The preposition “like” can also take collocations that reflect the fact that things can be 100% and nearly 100% the same (but preferences cannot), as in “It’s just like…” and “It’s almost exactly like…” “Somewhat” is also more common with the preposition than with the verb.

“Do you like playing soccer?” should have been presented on its own years before “What was your childhood home like?” I would also get students to use just “What… …. like?” questions such as “What is your neighbourhood like?” and “What was your hotel like?” from late Elementary or early Pre-Intermediate level, at least a level before I’d actually present “like” as a preposition. Both stages can be done without any mention of the contrast between the two kinds of “like”, but you might want to correct forms that will be confusing later such as “I am like ham sandwiches” and “What was your journey like?” “It likes good”.

You are then ready to contrast “What is … like?” and “What … do you like?”, perhaps after giving both as suggested follow-up questions when their partner talks about something. This can be done with almost any topic that involves both describing and giving personal reactions, for example:

You can also add the “similar to” meaning of “It is like a pie, but you usually eat it without a plate” with the topics above, this time with a model dialogue with examples like “His personality is like mine” and “So, is it like Ibiza?” After a general comprehension task such as listening for which things were good and which were not, the dialogue should give students enough context to be able to underline all the times that “like” means “similar to” and to circle all the other uses.

With most of the like and be like games and practice activities below, students are likely to over use the verb “like” and underuse the preposition unless they are pushed to use a good balance of both. Ways to force them to use both include:

The topics mentioned in the presentations section above can also be used in the practice stage. For example, you could get one student to talk about a mainly positive, mainly negative or mixed thing in their present or past, with their partner asking follow-up questions. To add more of the “similar to” meaning of “like”, the person listening could be told to suggest things that it sounds similar to with questions such as “So, is it similar to All Saints Day?”

The language could also come up naturally in actual business presentations, for example if students are presenting a new product that is an improvement on an old product, or one which is a combination of the functions of two or more old products.

Students make up dating profiles with descriptions of that person, what that person is looking for in a partner, and other personal preferences such as their taste in music. They can then try to match up the people from the different groups in the best way, making sure everyone gets a match which is at least not terrible. They could also vote on the profiles that are most likely and least likely to be successful in attracting potential romantic partners.

One student asks another to describe something that people have very different feelings about like “What is the movie Titanic like?” and “What is sea urchin on spaghetti like?” The person who was asked the question tries to describe that thing without giving their feelings away. The person who asked the question then guesses “I think that you like it” or “I think that you don’t like it” and is told if their guess is right or not and why. If you want to encourage more use of the “similar to” meaning of “like”, you could put things that people like and hate which are similar to each other (e.g. Marmite and Vegemite) next to each other on the worksheet or board.

Students get one point every time that their partner gives a positive response to questions with “like” such as “Are you like your mother?” and “Do you like blue cheese?”

Give students a list of things that they might or might not be familiar with such as British foods and/ or not so famous films. One student asks another “Do you like…?” about one of those things, and they must answer “Yes, I do”, “No, I don’t”, “It’s okay”, etc even if they don’t know anything about that thing. Their partner will then ask them “What is… like?” and they should try to answer with a description that matches what they first said about their feelings, making up anything that they don’t know. Their partner will then try to guess how much was true and how much was made up in their two answers.

Students answer “Yes” to all “like” questions such as “Do you like peanut butter?” and “Is your singing voice like Pharrell’s?” Perhaps after answering follow up questions, their partner guesses if their original “Yes” answer was true or not.

Something similar can also be done with “Have you ever…?” questions, with “like” and “be like” being used in the follow-up questions before they guess if “Yes, I have” was true or not.

One student asks their partner a question with “like” such as “What is rabbit meat like?” or “Which athletes do you like?” The person who was asked writes down the first five things that come into their head, with the first associated adjective, noun, similar thing, etc top of the list. The person who asked the question then guesses one thing that they think was written down, and gets five points if it was the first thing on the list, four points if it was the second, etc. They get no points if they guessed something that wasn’t written in that top five list (even if that is also true).

Students try to find a mix of preferences that they share and descriptions that they both agree are true, using questions such as “What is Mexican food like?” and “Which winter sport do you like best?” and hopefully being able to react to the answer with “I think so too” and “So do I”.

Students choose one thing from a list and answer questions about what kind of people like it, if they personally have any feelings about it, a more general description, etc until someone guesses what thing was chosen. This could work with all kinds of topics, but I’ve only tried it with a list of places such as “gym” and “park”, for which it works well.

Written by Alex Case for UsingEnlgish.com