How to teach some and any

Summary: Teaching tips for the determiners some and any, with some and any practice games 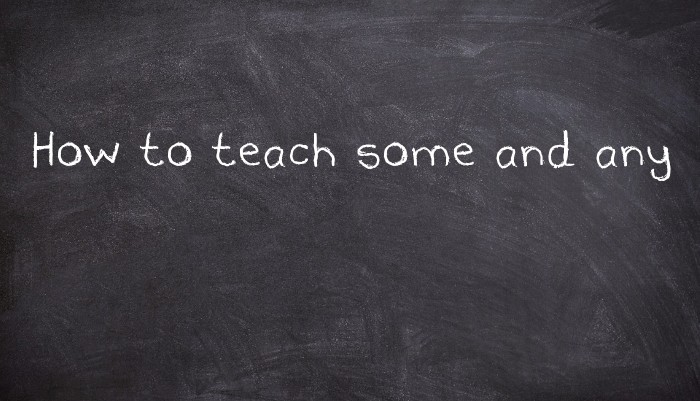 What students need to know about some and any

The simple pattern given in many textbooks is that “any” is used in questions and negatives (“Are there any mice in the mouse traps?”, “I don’t have any free time this weekend”) and “some” in positive statements (“There are some extra plates in the loft”). This works in most cases. The most common exception is “some” in questions like “Can I have some more porridge?”, but this can be dealt with by saying that requests are not really the same as other questions, perhaps by showing that “I’d like some more porridge” has the same meaning and grammar without being a question.

There are also, however, exceptions to all of those patterns, and other meanings of “some” and “any” which explain them. Exceptions to the “any with questions and negatives, some with positive statements” pattern include:

In addition to meaning “an indefinite number or amount”, “some” is also used as a quantifier to mean a number or amount somewhere between “a few/ a little” and “quite a lot”. Therefore in “We don’t both have some problems. I have many problems and you have very few” I’m contrasting the fairly low or medium number which you said we have to the lower and higher numbers which I think are true. This makes “I don’t have some…” fundamentally different to “I don’t have any…”, as the latter just means “I have no pencils”.

This contrast between “any” and “some” can be seen more often in questions which look similar but have different meanings, such as “Do you have any colour pencils?” and “Do you have some colour pencils?” If I have one car and someone asks “Do you have any cars?” the answer is “Yes”. However, if they ask “Do you have some cars?”, the answer is “No”, because I only have one, which is not “some”. Similarly, the request “Can I ask some questions?” probably means three or four questions, but “Can I ask any questions?” means I just want to know if the answer is zero questions or not. The latter also suggests that I know that no questions is a possibility, and so is a smaller request. The same contrasts work with uncountable nouns in sentences like “Can I have any information (or none at all)?” and “Can I have some information?”

This more general explanation that “any means zero or not zero but some means a medium amount” is probably only suitable for learners of Intermediate or even Upper Intermediate level, but that is long after most students would have first come across the words “some” and “any”. Therefore, the simpler “some with statements…” patterns are probably better for lower-level classes, as long as you remember not to overgeneralise and so say “often” in explanations like “‘Any’ often goes in questions and negatives”.

There is also the pattern of any with singular nouns in “You can have any chair you like”, which means “Anything is okay”. The similar but rarer form of “some” in “I hope to find some guy I can marry” and “I’m looking for some place I can lay my head” seems to have the meaning of “beggars can’t be choosers”. “Some idiot…” literally means “somebody who acted like an idiot, I don’t know who”, but is just as often used when who did it is so obvious that I don’t need to say their name. These meanings of “any” and “some” are rare (especially in ELF), difficult to contrast and not closely connected to the other meanings of “some” and “any”, so should be left for advanced levels.

The options for explanations are therefore, in approximate order of what levels and ages to present them:

Before or after learning the differences between “some” and “any”, students will need to know what they go with. This is most commonly “There is/ are…” and countable and uncountable nouns, in sentences like

Probably the next most common form to use “some” and “any” with is “have (got)”, as in “I’ve got some strange hobbies”. There are articles on there is/ are, countable and uncountable, and have (got) on this site.

How to present some and any

Students will find it difficult to deal with both “some/ any” and related verbs like “there is/ are” or “have (got)” if they are all new. Before introducing “some” and “any”, you could introduce “have (got)” or “there is/ are” with just numbers (“There are three red spots on my face”), then add similar sentences with “some” and “any”. You could then add uncountable nouns after that.

Another way of making the contrast between “some” and “any” really clear is to present them as part of a ranking of phrases from “a lot” to “not any”, for example:

It should then be easy to show that “Do you have some…?” is specifically about that word in the middle of the list, whereas “Do you have any…?” means anything above that one meaning “no” at the bottom of the list.

If you want to present the language through a text, a dialogue is probably more realistic than a written text, and many textbooks have examples. However, I find that textbook dialogues often don’t match the explanation that I want to use (or sometimes don’t even match the explanations that the textbooks use). I therefore usually have to edit or rewrite the dialogues to avoid too many difficult questions from my students after using them. Such texts usually involve people checking what is available and what is needed, perhaps including requesting the missing things from the other person if you want to present “Can I have some of your butter?” Situations that the speakers could be preparing for include:

With young learners, there is also the possibility of starting by just drilling vocabulary with picture flashcards, realia etc showing “some rice” and “some grapes”. You can get them to use that vocabulary in whole sentences in the next lesson, then introduce questions and negatives with “any” in the lesson after that.

There is also an idea below for introducing “some” and “any” in the middle of a classroom game of stations/ simplest responses.

How to practise some and any

It is very difficult to produce single-sentence positive statements, negative statements and questions where only one of “some” or “any” is correct in each gap. In fact, in every single workbook exercise I have seen on this, there is at least one extra possible answer that the person who wrote answer key had missed. For example, in the sentence “I don’t have _______ time”, “any” is by far the most common of the two possibilities, but it is also possible to say “I don’t have some time, I have all the time in the world!” If you want to make such blanked gapfill sentences, the best solution is to provide more context. This context could be a whole dialogue or at least two or more sentences (“We don’t have _____ cheese. There was a little left, but I think the mice ate it”). If it’s too difficult to adapt the textbook to provide more context, perhaps the only solution is to ask students to write “the most likely word” in each gap.

Some and any stations/ simplest responses

If you manage to find or make some sentence where really only one of the two words are possible, there are quite a few games that you can play with these. Most of these are a kind of stations/ simplest responses game in which students listen and raise one hand for “some” and the other hand for “any”, throw something such as paper aeroplanes at those words on the board, run and touch one of two walls representing the two words, etc. If you start with students just listening out for those two words in complete sentences, this could be followed by them working out the rules/ patterns, then doing more difficult practice with the same game with gapped sentences.

Some and any roleplays

All the situations given above for dialogues that can present the language (preparation for cooking, etc) could also be roleplay conversation topics. To make sure that there is a range of language, you could tell them that about half of the things are missing, and about half of those missing things cannot be got by the people in the conversation and so need to be left out or replaced with something different.

Some and any card games

Another way to make sure that students use a range of language during discussions is to give them cards with words on that they must use. These can be cards with “some” and “any” on and/ or cards with key words which should prompt use of “some” and “any” like “There”, “I’ve got”, “spare”, “free” and “in my bag”.

Some and any coin games

Some and any make me say yes and no