How to teach senses vocabulary

Summary: How to teach words related to your five senses, with senses vocabulary games 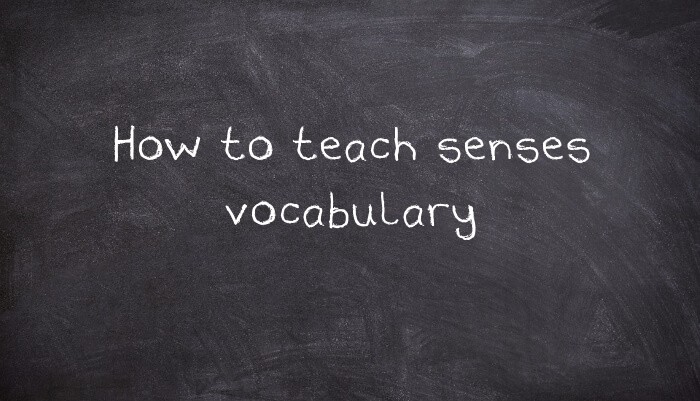 Vocabulary related to sight, hearing, smell, taste and touch is useful for everything from explaining things that you don’t know the English word for to understanding the subtleties of descriptions in literature. Senses vocabulary is therefore well worth a lesson or two, especially at higher levels. This article gives ideas on presenting and practising a wide range of such language. There is also an article on this site specifically on verbs of senses such as “hear” and “taste (like)”.

What students need to know about senses vocabulary

Probably the most famous and most taught part of senses vocabulary is verbs of senses such as “see” and “smell like”. You could easily do a whole lesson on just this point, including details like:

Teaching these basic verbs of senses can be usefully combined with other verbs which have similar meanings such as “sniff” for the action “smell” and “reek” for the property “smell of”. Use of (near) synonyms like these would help to emphasise the differences between the three kinds of verbs of senses, as the different kinds of verbs generally have different synonyms. Adding such synonyms is also a good start to expanding the range of senses vocabulary that you present and practice. Examples of these kinds of verbs with similar meanings include:

(Near) synonyms of verbs of sight

(Near) synonyms of verbs of hearing

(Near) synonyms of verbs of taste

(Near) synonyms of verbs of smell

(Near) synonyms of verbs of touch

Many of these words are much more specific than the basic verbs of senses, something that makes them tricky but useful, especially with students who might read fiction. One of the things that makes them more specific is having positive and negative connotations. For example, the words “glare at”, “reek”, “pong” and “stink” are clearly negative. Apart from maybe “savour”, the positive ones are less obvious, but “catch”, “gaze”, “feel your taste buds flood with” and “stroke” usually have positive connotations. These can be seen in the words they often collocate with, such as “gaze longingly”.

Collocations with verbs of senses

Other common collocations with verbs of senses include:

There are also words which could collocate with verbs of senses but are so much associated with one sense or the other that they are more likely to go with other verbs such as “be”, as in:

Most of those are also usually positive or usually negative.

There are also a few associated nouns like “aroma” and “visibility”, but most of these can be derived from adjectives.

Things students tend to find difficult about senses vocabulary include:

How to present senses vocabulary

If you want to present lots of the kinds of vocabulary above, it is virtually impossible to fit it all in one text with enough context to make the meanings clear. However, you can give them a text from which they can work out which senses are being talked about and some differences between those words such as positive and negative connotations. After presenting those concepts that way, you can then present related words such as synonyms and other collocations in other ways.

If you want to include a conversation which includes plenty of vocabulary related to all five senses, it almost certainly needs to include the topic of food and drink. Good topics for teaching senses vocabulary that include the food and drink include holidays in exotic locations, cooking, becoming a sommelier, learning food appreciation, setting up a new restaurant or food shop, childcare, hunting, and farming.

One way of then presenting more suitable vocabulary is the five senses list dictation described below, but that doesn’t show any little differences between the words. After or instead of that, I’ve successfully tried an activity where students are given pairs of words or expressions with a question next to each one such as “Which one is stronger?” If each pair includes a word which they already knew or worked out the meaning of on a previous line, this can be used as a presentation task. Alternatively, you can give them the paired words with definitions and get them to put them in suitable gaps, then get them to remember the words to match the same definitions.

How to practise senses vocabulary

Students listen to a list of words which are all related to smell, are all related to touch, etc, and race to correctly guess which sense they are all linked to. To make them listen to a decent number of words, it’s probably best to punish wrong guesses with points off, having to wait until the next round to guess again, etc. This game can also include other things in common such as a list of words which all have positive connotations.

Students use suitable verbs like “peek”, adjectives like “sticky” and/ or nouns like “aroma” to make up stories, for example by adding a sentence using vocabulary from the list to what their partner just said happens in the story. As well as the suggested vocabulary, you could give students starting lines and/ or ending lines.

The situations for presenting the language through above can also be made into roleplays, such as:

Students give hints on how something tastes, when people look at it, what it feels like, etc, until their partner guesses what thing they chose to describe, with only one guess allowed per hint. If you give them example hints to read out, this can also be done before the presentation stage.

Give students a list of personal topics which are likely to bring up the five senses such as favourite clothing, something that comforts them, and something they like in the winter. Students choose one of the topics, talk about it for as long as they can, then answer follow-up questions from their partner(s) like “What does it smell like?” and “When do you listen to it?”

Students use words like “aroma” and “silky” to try to sell a real or made-up product. To make them also use negative words, you could give them sentence stems like “You might think that it is …, but…” and “Until now, … have always been …, but now…” These could be for written ads, radio commercial scripts, or business presentations presenting the idea to the board.

Make a list of things from students’ cultures that foreigners might not be familiar with and/ or things from other cultures that only some students will know, then ask students to work together to explain them in a way that anyone could understand. To make for a good range of senses vocabulary, make sure that there are things on the list which have distinctive smells, flavours, appearances, etc. You could also choose key vocabulary like “acquired taste” and “rough”, and make sure that you include one example for each.

One student chooses two words related to more than one sense, e.g. “bitter” and “shiny”, for their partner. Their partner then describes something in the world that matches those two words, making it up if they can’t think of anything real, as in “My mother always polishes the lemons and leaves those shiny lemons in the fruit bowl” or “In the Amazon there is a shiny glowing fungus that make you high but tastes really bitter”. After asking follow-up questions, the person who chose the words guesses if the description is true or not.

Make a pack of cards with senses vocabulary like “bumpy” and “rich” on each card. As in the traditional card game pairs/ memory game/ pelmanism, students spread the cards face down across the table, take turns taking two cards, and win if they are related. With this game the relation must be that they can think of one thing that matches the words on both cards, e.g. that tiramisu is both bumpy and rich. The “random” part of the name of this activity comes from the teacher not having to have answers in the mind when the game is created, instead just making sure that the vocabulary is suitable for the class.

To make the game easier and also make the students think more about the vocabulary, they could also be allowed to find other things in common like “They are both positive words” and “They are both related to hearing” (as long as they don’t use exactly the same sentence twice during the game).

In this simpler version of the game above, students just try to find two cards which are related to the same sense, e.g. two words related to touch. In this case, the pack of cards should contain an even number of words for each category, and maybe approximately equal numbers for each of the senses. However, students may find matches that you hadn’t thought of (e.g. that “disgusting” can also be related to sight), in which case the game could end with some words on the table which are impossible to match.

Students choose senses vocabulary and try to find things that both people/ all of the people in their group “sniff suspiciously”, think “feel cosy”, etc. To make this interesting, they’ll need a list of words which not everyone usually agrees on like “revolting” and “too slimy” (not boring words which aren’t debateable like “cold”).

Five is a very convenient for numbers one to five on the dice to mean one of the senses each, with six meaning “free choice”. This could be used to decide which kind of thing they find in common next, which sense the next line of the story is related to, etc.

A coin is a less obvious choice than a dice for practising senses vocabulary, but it is quite convenient for the many positive and negative words above to be decided by heads or tails, for example to decide if positive words or negative words will be used next in the ad they are creating, the bluffing game they are playing, etc.

How to teach British and American vocabulary Read More »