How to teach transport vocabulary to young learners

Summary: Lots of things to teach about transportation and how to do so 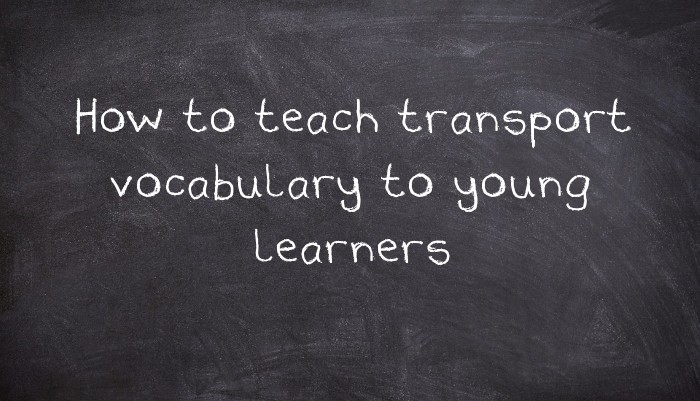 Transport is a very popular topic with kids (certainly not just boys), links in well with other common YL topics such as toys (“toy car” etc), and is probably more useful in students’ adult lives than many such young learner topics.  It also ties in well with CLIL topics like road safety and cultural differences, and can be combined with other language points such as prepositions of position and movement, describing dimensions, and giving opinions.

Things you might want to teach about transport include, in approximate order of when I’d present them:

- Names of common kinds of transport

- Language to talk about transport in full sentences (e.g. “There is a… from… to…” and “I come to school by…”)

Younger but keen classes might have problems with the concept of collocations etc above, so you might be better off sticking to just names of forms of transport (including more unusual ones) and verbs with such classes.

Transport can also be combined with/ extended into other things that move, for example:

- Transport only used in sports (e.g. “go kart”, “skeleton toboggan” and “windsurfing board”)

You could also mention other ways of getting round (e.g. “skateboard”, “skis”, “wheelchair” and “moving walkway”).

Examples of those basic things include:

Less common forms of transport include:

Obvious ways to try to elicit the names of forms of transport include:

Although this limits the vocabulary you can present, there are also forms of transport that you can use mimes for, such as:

-          Submarine (holding nose and moving body down into a squatting position)

You can present much more vocabulary with a game I call Transport List Dictation, in which the teacher reads out a list of things that have something in common until one student or team works out what the connection is, e.g. that they all have two wheels.

Higher level classes could brainstorm transport vocabulary onto a mind map, explaining or drawing any they don’t know the English for.

Noises, flashcards, toys, descriptions, mimes and brainstorming can also be used in the practice stage. Some of these can be combined, e.g. getting them to do the action and make the noise as they run towards the flashcard that the teacher has called out the name of. They can also use noises etc with an adjective plus a transport noun, e.g. making the sound of a slow car or miming an old train (i.e. a steam engine).

With toys, students could feel what they are through a bag, guess what a Transformers-style robot changes into (from a toy, picture or video), or add other transport to a picture of a model railway. They can also design their own transport toys, explaining what each thing can do (e.g. the dump truck can really squash rubbish and the helicopter can move up and down on a pole).  They could also choose which toy they want for a particular challenge, e.g. to push along the floor onto a flashcard that the teacher calls out or to balance on their head.

If you want students to describe kinds of transport for their classmates to guess, they might need some help with categories or vocabulary, for example:

-          Number of people (or used for transporting things rather than people)

The brainstorming that is mentioned above for presenting the language can also be turned into a race at the practice stage, e.g. asking them to write as many “things with two wheels” or “transport with no engine” as they can in two minutes.

Project work on the topic of transport includes combining two or more kinds of transport (e.g. drawing a pedal-powered taxi or a submarine/ plane), adapting some transport for a completely different place (e.g. a bicycle for a really steep mountain or a rowing boat for the ocean), changing a kind of transport as much as possible (e.g. a train until it is almost unrecognisable) and drawing an around-the-world trip on a map with a different kind of transport for each stage of the journey. In all of these cases, they should write descriptions of what they have created and/ or present their ideas to other students.

You can also personalise the topic, as long as you take into account that the number of forms of transport most students will have travelled in will be limited. You can exploit this by giving them sentence stems like “have touched”, “want to buy”, “have a toy” and “saw last week”.  These can be used for bluffing games, questionnaires, or guessing true things about their classmates.

If students can see a street from the classroom, they could race to count types of transport there now or predict what will come next. The same thing should be possible with streamed CCTV of streets and other videos, e.g. of stupid driving. You could also freeze a video including several forms of transport and get them to predict what will happen (e.g. “The bicycle will overtake the slow car”). They can also guess the transport from just the sound on a video then watch again with the image to check.

There are also loads of popular animated movies and TV shows, storybooks, computer games, card games and songs on the topic, for example:

-          The animated songs 10 Little Aeroplanes, Over the Mountains, and Stop Look Listen Think (both on LearnEnglishKids, the third one for road safety)