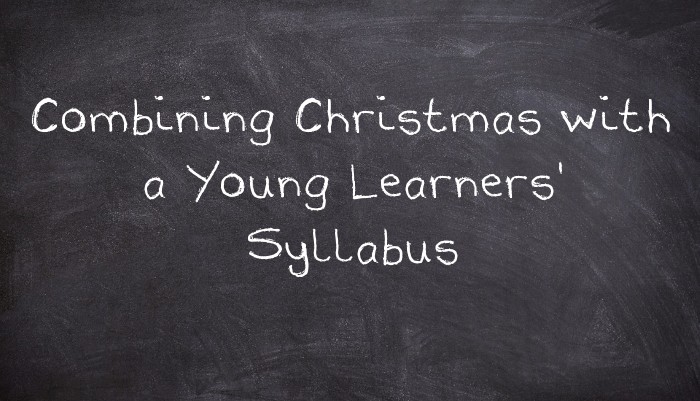 Doing seasonal festivals stuff with little kids can be a great motivator for them to learn English. The fact that the topic of Xmas is all around them at this time of year makes the language much more real for them, and that is helped even more nowadays by the fact that they are likely to see English language “Merry Xmas” posters, hear English language Xmas songs and meet the American Santa in their daily lives.

Apart from some Xmas traditions in the UK and USA that might come up in their Xmas lessons but be totally unfamiliar to the kids (e.g. “mistletoe” or “holly”), the main problem with the Xmas topic is that you could well spend most of December doing it, but that will mean that small kids with only a few English lessons each month will have forgotten most of the other language you were teaching them before you started to the Xmas topic by the time January comes round. Add to that the fact that they will forget most of the exclusively Xmas vocab you’ve been covering for a month by the same time next year, and you can see the need to “do Xmas” with as much language from their normal English syllabus as possible. Here are some suggestions:

Xmas Numbers
You need a picture of several reindeer pulling the sleigh. After you teach the word “reindeer”, ask how many reindeer Santa has. If necessary, flash the picture briefly to help them. After they have a few guesses, reveal the picture slowly as you count. You can move onto “What’s his name?” if the students already know the names or can read.
You can play the same game with the number of buttons on the snowman, number of presents under a Xmas tree, number of stars on a Xmas tree etc.
If you have enough green blocks, you could also get kids building a pyramid shaped “Xmas tree” out of blocks, counting the blocks as they add them until it falls over.

Xmas Prepositions
You need a picture of a Xmas tree with decorations on it and presents under it, plus if possible at least one unexpected thing like a monkey or banana somewhere in the picture. While the picture is hidden ask where things are ‘Where is the star/ are the presents?’. The students guess where the things are and the teacher reveals the picture slowly and asks them to check. Finish with a seemingly nonsensical one like “Where is the monkey?” to add some humour.
Alternatively, once you have taught the Xmas vocab you can use the position of things in a picture as hints for students to guess which object you are describing, e.g. (teacher) “It’s on top of the Xmas tree” (children) “It’s a star!” (teacher) “Let’s have a look. Yes, that’s right!”

Xmas Colours
Same as Xmas Prepositions above, but guessing or remembering colours of Santa’s nose, snowman’s hat etc, or guessing the objects from colour hints.

Xmas shapes
Same as Xmas Colours and Xmas Prepositions above, guessing the object from the shape or remembering the shape of the objects. Alternatively, you can have a picture with bits missing and get the students to tell you what shapes to add to make it complete, e.g. “circle” for buttons on snowman, “square” for presents under a tree, “triangle” for a missing Xmas tree between the star floating in mid air and the presents etc.

Xmas Adjectives
Guessing the object same as above, but giving clues with adjectives, e.g. “He’s fat”, “He’s old”, “He’s happy” “Is he Santa?” “Let’s have a look. Yes, that’s right!”

Xmas Clothes
Have a picture of Santa in his underwear and get the kids to tell you what you need to put on him. Then as a class mime putting on the same clothes. Can be combined with colour vocabulary.

Xmas toys
Have real toys or pictures of toys wrapped up in cloth, newspaper or wrapping paper and students guess what is in each one after the question “What’s in my present?”. Unwrap it to check. This can also be done with pictures by having pieces of wrapping paper cut to the shapes of the objects on flashcards or a poster and then slowly pulling them away to reveal the object after students guess.

Xmas weather
Students call out the names of the weather you are miming. When you mime “It’s cold” and “It’s snowing” in a row, the students shout “It’s Christmas!” or “Merry Christmas” or start singing a Xmas song.

Xmas months
Students throw and catch a beachball while chanting through the months. Anyone who catches the ball when the next month is December has to say “Merry Xmas” or sing part of a Xmas song. You can then reward them with a small present or a Xmas card. This can combined with “birthday” so that each person has to say “It’s my birthday”, have the birthday song sung to them and maybe get a present if they catch the ball while chanting the same month as their birthday is on.

Xmas people/ Xmas animals/ Xmas body parts
Describe an animal or person to the students one line at a time, including as many body parts as possible, e.g. “It has four legs”, “It is brown” “It has a red nose”. When they have decided if it related to Xmas (e.g. Santa, reindeer, robin) or not related to Xmas (spider, monster, teacher) they say “It’s a Xmas animal/ person” or “It’s not a Xmas animal/ person”. Show the flashcard so they can check their answers.

Other articles about Christmas: