How to teach British and American vocabulary

Summary: The most important differences between British and American words and phrases, with teaching tips and classroom activities 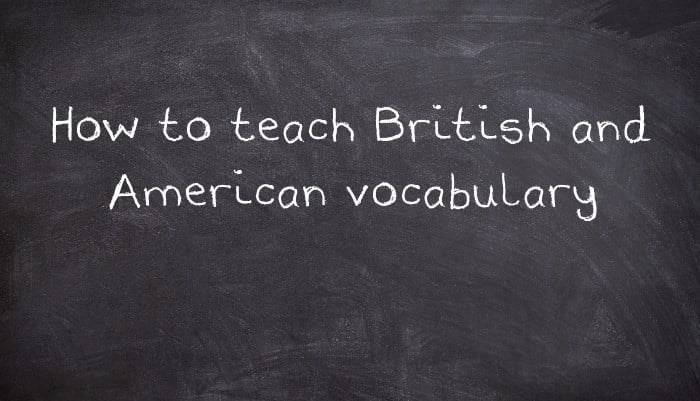 What students need to know about British and American vocabulary

Vocabulary differences most often come up with the topics:

There is a big list of nearly 900 examples of British and American differences on those topics on this site.

As can be seen from the examples above, the two differences are:

In addition, there are British and American terms like “the dole” and “Medicaid” that don’t really have equivalents in the other country.

Teaching words which have different meanings in British and American English

Of those three kinds of differences, the most likely to cause confusion and therefore the most important to learn are words with different meanings in different varieties of English. As with the “pants” example above, such misunderstandings can also lead to laughter and/ or embarrassment.

The ones which are most likely to cause misunderstandings include (in alphabetical order):

Although they are less likely to cause confusion than words with two meanings, there are many more cases where Brits and Americans use different words for the same thing (“trainers”/ “sneakers”, etc). The ones which are most worth teaching are included in the list below, and there are many more in the big list of vocab differences elsewhere on this site.

100 different words in British and American English (in alphabetical order)

An interesting category that is sometimes worth dealing with separately is the use of brand names. In some cases British and Americans use different brand names for the same kinds of things, as in:

There are more with a brand name in American English, including:

As well as the compound nouns in the lists above, other collocational differences include:

There are also a few examples of longer fixed phrases which are different in British and American English, as in:

None of these are particularly worth teaching as they are easily mutually comprehensible, but a teacher must be careful not to “correct” a student who uses the variation which the teacher is less familiar with.

How to present British and American vocabulary

I tend to just present UK and US vocab as I go along, mainly by giving the other version in brackets each time I mention a word which has variations in the UK and USA. Ways of deciding which form to put first and which to put in brackets afterwards include:

I usually do the last of these, because I think that most students just need to know both forms, without worrying too much about which is which.

This technique of giving a second form in brackets can be used with lists of words to speak about (e.g. a list of things to complain about in a hotel). It can also be used with lists of words to test each other on as Pictionary, miming games, etc. You could also put the words into context in roleplay cards, problems for students to discuss the solutions for, discussion questions, etc. When they finish that activity, you could then test them on their memory of both forms with a task such as joining up words with the same meaning.

The main problem with the activities just explained above is that students can easily do the tasks without having to actually look at the less familiar version of the words. This can be improved somewhat by getting them to do an actual language task in which both forms are given. For example, if you put both British and American collocations on the same dominoes so that students can join “fire + engine/ truck”, you can then later test them on their memory of both forms.

Find some useful collocations which have both British and American forms and which your students are only likely to know one version of. Split the unfamiliar forms and put the first halves of some on the Student A worksheet and the first halves of the others on the Student B worksheet, with the endings on the other worksheets. After the endings, also give the form that they probably know in brackets, as in “bump” + “hat (hard hat)”. Without showing their worksheets to each other, students try to match the beginnings and endings, only using the clues in brackets later to help or to start checking their answers. They can then be tested a different way on both forms.

Another nice activity for a Test Teach Test approach is to give students British and American versions next to each other in a long string of words without gaps such as “bintrashcantapfaucet”. Ask students to rewrite the lists as paired up British and American words and expressions. If that is too easy, you could also produce a list of the British words with no gap (“undergroundcoachtram”) and a matching list of the American expressions with no gap (in the same order, as in “subwayhighwaybusstreetcar”) for students to split and then match.

The activities near the top of the practice section below should also work as presentation activities when using a TTT approach.

How to practise British and American vocabulary

How British is Your English vocabulary?

Students predict how British or American they think their own English vocabulary is (e.g. “Almost totally American”), then take a quiz to see if they were right.

First of all, the teacher reads out some definitions of the words and expressions that they want to present (e.g. “It’s the covering of the engine of a car”), without giving any options at this stage. Students try to write down just one word or expression that they would usually use to describe that thing when they are speaking English (not when speaking L1), e.g. “bonnet” or “hood”. If they can’t understand the definition or no words come to mind, they should just leave that one blank until the next stage.

Students then hear the same definitions but with British and American options such as “elevator/ lift”, without being told which is which. They must choose one of those options if they left any blanks in the previous stage, choosing which they like the sound of if they aren’t familiar with any of the options. If they didn’t leave a blank, they should usually not change their original answer, unless it wasn’t one of the options or (very rarely) if they suddenly realise that they would be more likely to use the other option.

In the third stage, students compare their choices with a partner and try to guess whose choices are more British and whose are more American. After the teacher tells them which are which, they check if they were right about whose vocabulary was more British/ American.

For more speaking, students can then do the same for each other, making up definitions of words on their (Student A and Student B) worksheets such as “chemist’s/ pharmacy/ drugstore” and then telling their partner how British or American all their choices were.

British word, American word, or not?

A lesson on British and American vocabulary can also be a good chance to deal with local forms that are constructed from or abbreviations of English words but aren’t used elsewhere, such as “sharp” for “automatic pencil/ mechanical pencil” in Konglish and “dust box” for “bin/ trash can” in Janglish. The tricky part of planning the class is to make sure that students can’t just go through the list crossing off the forms that they are familiar with from their own language, ignoring the British and American forms. One way of doing this is to mix up some British/ American/ Janglish lines with some British/ American/ completely made up lines such as “patrol car/ police car/ police officer car”.

A list dictation is an activity in which students listen to a long list of words and expressions and guess as quickly as they can what those things have in common. Perhaps the best way of doing this for British and American English is to read out a list of both kinds (e.g. “estate, station wagon, windscreen, windshield”, etc) until students guess the topic (“cars” in this case). They can then be tested another way on the matches between the words.

With students who are particularly hung up on which is which, you could also read out a list of just British words or just American words until someone is sure which kind they are hearing. This can be combined with the version above if students have to guess “British food vocabulary”, “American clothes words”, etc.

Perhaps the most common textbook activity for British and American vocabulary is to match up words with the same meanings and/ or to say which word is British and which is American. However, this is almost completely useless without more context, as students either know all the words already or have no way of knowing apart from completely guessing. A jigsaw is one way of giving students more clues and so letting them guess better than randomly.

Make a two-column table with British English on the left and the equivalent American English word or expression next to each thing on the right. Alternatively, you could also add a third column in the middle with a definition and/ or example sentence for those words. Make sure that the words and expressions are a mix of ones which students know but need to revise and ones which they only know one form of but would benefit from knowing the other form of. Cut up the worksheet as a kind of jigsaw, with each box being joined to at least one other box, so that students can use the ones they know to match the ones that they don’t. Don’t leave any individual cards on their own. If students get stuck when they try to put the jigsaw back together, you can: