How to teach British and American grammar

Summary: How to present and practise the most important grammatical differences between British and American English 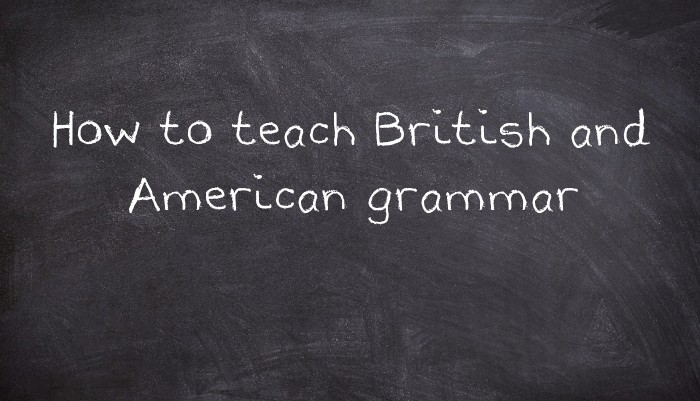 British and American grammar differences are far less important than differences in vocabulary, functional language, gestures, and possibly even spelling and punctuation (all dealt with in separate articles on this site). However, students will still inevitably come across grammatical differences in US and UK English at some point, even if it is only to be told that there was no need to correct themselves a minute ago or that both the answers given in the book are actually correct. This article summarises the main differences between grammar in Am. Eng. and Br. Eng. that students need to know about, then gives teaching tips and classroom activities for presenting and practising those differences.

What students need to know about British and American grammar

Perhaps the most useful thing to say about UK and US differences in grammar is that there is no need to worry because both of the forms that they are considering are correct, e.g. that “at the weekend” and “on the weekend” are both right or “I just did it” and “I’ve just done it” are both acceptable. This section is organised by approximately how I often I say that about each grammatical point.

Present Perfect and Past Simple in British and American English

Americans use Present Perfect less often than Brits. American use Past Simple in sentences with “yet” and “already” like “Did you do it yet?” and “I already did it” where a British person would usually say “Have you done it yet?” and “I’ve already done it”. The same is true about “just”, with “I just did it” being American and “I have just done it” being British. The same is also generally true about past actions with a present result like “Have you had your hair cut?”/ “Did you have your hair cut?”

Both Brits and Americans use Present Perfect with unfinished times like “I’ve been here since 12 o’clock” and “Have you ever been to Japan?” You could explain this disparity by saying that the connection to now is less clear with the other uses of Present Perfect (especially “just”, which basically means “a few… ago”). It is therefore understandable that there is some disagreement over whether Present Perfect is needed or not in such cases. However, the most important thing that students need to know is that they can’t go wrong with “yet”, “already” and “just” (whatever the textbook exercises may suggest), as long as they avoid “I just do it”.

In addition, there are some irregular Past Simple and past participles which are only common in one of the two forms of English. Americans one which are never or rarely used in British English include “dove” and “snuck”. These are best avoided in class unless they come up as even some Americans consider them non-standard.

There are also verbs which are (sometimes, usually or always) irregular in British but always or usually just followed by “-ed” in American, including:

Again, I would probably stick to regular forms for these unless the other forms come up in the textbook, reading texts, etc.

Perhaps the most common difference is one where British and American are differently irregular, namely “got” and “gotten”.

Have got in British and American English

Americans rarely use “got” for the possessive meaning of “have”, saying “I have three sisters” where a British person would usually say “I have got three sisters”. “Have got” can be useful to explain why “I’m having a great time” is correct (because “have” doesn’t mean “have got”) but “I’m having three sisters” is wrong (because “have” means “have got”). I would otherwise skip any practise of “have got” and stick to “Do you have…?” as this form is also possible in British English and has arguably become the international standard. The same is true of the British form “I’ve got to…” for “I have to…”

In British English, a group of people such as a sports team can take a verb with or without third person S. This depends on whether we think of the group as one thing or as a collection of different individuals as in “The team is the best in the league” and “The team come into the changing room one by one for a massage” respectively. In American English, “the team are” is always incorrect. I would say that this follows a more general pattern of Americans being more literal and/ or traditional about grammar, perhaps because “good” grammar is a kind of class marker in the US, whereas accent is a much more important class marker in the UK.

Prepositions, adverbs and phrasal verbs in British and American English

This language point is actually somewhere between grammar and vocabulary. Situations where students worry about the prepositions but two or more different forms are correct, include:

After 15 years of reading the New York Times almost every day, as a British English speaker I am still annoyed by the structure “The government will likely…”, which for me should be “The government is likely to…” However, in American English “likely” can also be used like “probably” and “possibly”.

In British English “I like to go…” means that I think it is something that I should do, so “I like to go the dentist” doesn’t mean “I like going to the dentist”, as the latter would mean “I enjoy going to the dentist”. Americans don’t have this distinction and generally use “I like to…” to mean “I enjoy…” Americans also tend to use the infinitive with to after “love” and “hate”. Given the choice, I would use the British version with “…ing”, as it is more consistent with related verbs like “enjoy” and “despise”. However, I would let students use “like to do” etc with the same meaning, and I wouldn’t mention the British distinction in all but the highest level and/ or most Anglophile classes.

How to present British and American grammar

I would limit mention of most points above to simply saying “either is fine”. For example, when we are teaching Present Perfect, I tend to follow the textbook and my own speech in teaching “have + PP” with “yet” and “already”. However, I briefly tell students that Americans use Past Simple with those words and so students don’t need to worry about which they use. I then accept both forms in all written and spoken practice. I have the same process for most points above, namely:

To decide which form above to present, you should consider:

There are a few situations in which I would do a whole class on British and American grammatical differences, for instance:

In such classes, probably the easiest way to present grammatical differences is to give students an original text and a version which has been rewritten in the other form to spot the differences between. You can rewrite one continuous text or just unrelated sentences. After finding all the differences, students could then try to work out which text is British and which is American, perhaps also from other differences such as spelling.

How to practise British and American grammar

Give students three versions of a sentence including grammar such as tenses or verb patterns, with one form not being standard in either British or American English. For example, for verb patterns, one line could say “I like going/ I like to go/ I like go”. Students simply try to find and cross off the one wrong form on each line. It’s best if the British and American forms are always in the same order, and that the wrong forms are scattered before, between and after those two correct forms, so that they can use their knowledge of British and American English to help complete the task.

Give one student a worksheet with phrases with British grammar such as “I’ve already finished it” and “fill in this form” and the other student the same phrases with American grammar (“I already finished it”, “fill out this form”, etc). Students compete to use as many of their phrases as they can during a roleplay conversation between a Brit and an American, e.g. a roleplay business meeting or in tourist information. More creative students could also try to use suitable vocabulary, pronunciation, cultural references, etc. You can then test them on their memories of which grammar was on which worksheet.