Summary: How US and UK calls differ in phrases, vocabulary, topics and other cultural norms. 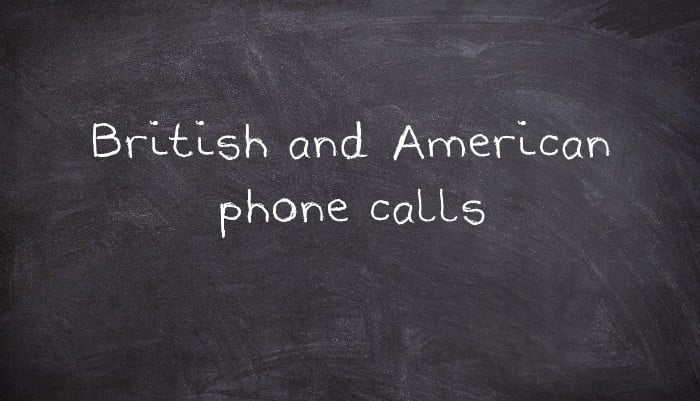 This is a guide to the few but interesting and sometimes important differences in language and cultural norms between telephone calls in the UK and USA. For a comprehensive guide to the basics of both, see the e-book Really Learn the Most Important Telephoning Phrases. There is also a more general article on cultural differences in telephoning available.

As with emailing (https://www.usingenglish.com/articles/differences-between-british-american-emails.html) and the English language more generally, telephone calls in the UK and USA are very similar, with most differences being minor and almost everything being mutually understandable. However, there are a few interesting differences in how British and Americans speak on the phone, including some potential misunderstandings. This article lists and explains most of them, starting with beginning and ending British and American calls, and then dealing with the body of such calls and some vocabulary differences.

Answering the phone in the UK and USA

With a home phone or mobile, just answering the phone with “Hello?” is standard in English. If you can see who is calling (e.g. on your smartphone screen) and know them (well), it has become more common to greet them by name straightaway instead, e.g. “Hi Steve. Thanks for calling me back”. More casual greetings in that situation would be “Yo, Steve” or just “What’s up?” in the US and “Alright Steve?” in the UK, with Americans perhaps more likely to use these kinds of more informal phrases. Americans are also more likely to use affectionate phrases like “Hi Honey” or “What’s up, bro?”, with the British equivalent “Alright, mate” being both less common and not actually being so friendly.

If the caller knows the receiver, in English we usually start with a social question like “How are you?”, or generally a more casual and friendlier version. In American English the standard casual form of “How are you?” is “How are you doing?”, with Brits more commonly using “How’s it going?”/ “How’s life?”/ “How are things?” The answers can also vary, with Americans often going for enthusiastic words like “Great” but the British traditionally preferring understatement such as “Not bad” or even “Mustn’t grumble”.

Other topics of conversation vary a little, with Americans more likely to talk about families, even with work contacts, and the British famously preferring to talk about the weather.

Asking to speak to someone in US and UK

If you want to speak to someone else, there is again a difference in the use of “can” and “may”, with Americans often saying “May I speak with…?” and British more often saying “Can I speak to…?” In this case “May I…?” seems too much in the UK, as in British English “May I…?” is asking for permission rather than for making requests. If you need to ask more politely, you can use “Could I speak to…?”, which is also fine in US English. Also note the use of “with” in “speak with” in the American example but “speak to” in the British example.

The positive answers to a request to speak to someone also vary, with Brits most commonly using the phrasal verb “put someone through” in “Of course. Please hold the line. I’m putting you through”. Americans prefer the more straightforward “I’m transferring your call”. “I’ll connect you” is fine in both kinds of English. All three expressions are also possible in the questions, with “Can you put me through to…?” being most common of those three for British people.

When it comes to negative answers, English speakers share a cultural need to be very specific about why someone can’t speak (right now). You may come across the well-known “engaged”/ “busy” vocabulary difference in that excuse, in “I’m afraid his line is engaged/ busy” in British and American respectively. However, it’s more common nowadays to say “I’m afraid he’s on another line” in both places.

English speakers tend to put more effort into making getting down to business smooth (meaning not sudden) than most other nationalities. The only slight variation among English speakers is the British love of linking the small talk topic and the reason with the call with phrases like “Talking about…, I reason I am phoning is…”, “I’m glad you mentioned that, because I need to talk to you about…” and “Connected to that, I need some advice on…”. Americans seem to put less effort into this kind of smooth transition (in business meetings as well as phone calls).

When it comes to saying the reason for the call, the British have “I’m ringing about…” to go with the more standard “I’m phoning about…” and “I’m calling about…”

Dictating in British and American English

There are some important differences in how Brits and Americans say letters and numbers that could impact intelligibility when dictating and taking dictation on the phone. For example, the British say “Zed” for the last letter of the alphabet (“Z”), while Americans say “Zee”. In addition, in the UK people say “oh” (in phone numbers) or nought for numbers, while Americans almost always say “zero”. Americans are also more likely to say “sixteen hundred twenty three” rather than “one thousand and twenty three”, with the love of “and” in big numbers being a British peculiarity.

There are also some differences in the names of punctuation, with “.” being “full stop” in British and “period” in American. “()” is “brackets” and “parentheses” in the UK and US respectively (both of those words having different meanings in the other variety of English).

Making arrangements on the phone in British and American English

Again, the similarities (giving detailed reasons why an arrangement is impossible, etc) are more important than the rather minor differences. These tend to be mainly about prepositions (“Monday to Friday” in British against “Monday thru Friday” in American, “at the weekend” vs “on the weekend”, etc).

Reasons are also often needed when ending a call, as in “Someone has just come in” (British)/ “Someone just came in” (American).

We then often mention future contact. That lovely little British verb “ring someone” can come up again here, in “Can I ring you back later?” and “Please ring again if you have any other questions”. The famous “mobile phone”/ “cellphone” distinction might also come up when talking about future contact, as in “Can you ring me again later on my mobile (phone)?”/ “Can you call me later on my cell(phone)?” The same is true of text-based electronic communication. For example, “I’ll mail it to you later” needs the full word “email” in British and “I’ll text you later” in British means “I’ll send you an SMS” in American.

The British sometimes say “Cheers” at the end of a phone call to mean “Thanks (in advance)” and/ or “Bye”. This has somewhat caught on in the US, but is usually a conscious “Briticism” and is far from standard. There are also some specifically British ways of saying goodbye like “Ta-rah”.

As in face to face situations like shopping, Americans are much more likely to say “Have a nice/ good/ great day” than British people are. They are also more likely to show more genuine feelings, with “Love you, bye” etc to family members and lovers being rare in the UK, at least when other people might be able to overhear you. In British English, expressions that superficially sound affectionate like “Bye love” (popular with old ladies) and “Okay, mate, see you” actually have no special meaning.

This is a summary of the most important vocabulary differences above plus a few more that are rarer to actually say during phone calls but could come up when discussing the topic of telephoning, such as the emergency phone numbers “nine nine nine” (UK) and “nine one one” (USA). Ones with a star (*) are also fine in the other kind of English.

on holiday/ on vacation*

put someone through/ connect someone* or transfer someone’s call

ring someone/ call someone* (= telephone someone)

text someone/ send someone an SMS

How to be friendly on the phone in English Read More »