How to teach British and American times, dates and numbers 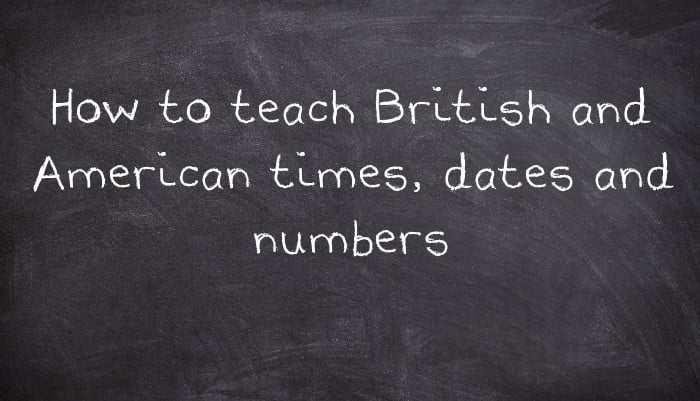 Along with differences like variations in grammar and vocabulary (dealt with in other articles on this site), British and American English also vary quite a lot in the use of times, dates and other numbers. This article explains the major differences and then gives some teaching ideas. Unless stated otherwise, explanations are given with British meanings and uses first and then American ones.

Differences between British and American times, dates and numbers

Times and dates in British and American English

The British generally say “… past…” (“Ten past four in the morning” for 04:10, etc) and “… to…” (“Ten to four in the morning” for 3:50, etc) with times. In the US there is more variation, but equivalents that are not common in the UK include “… after…” and “…of/ before…” British people also fairly often leave out the “half” from “half past” in expressions like “half six”.

British dates are written and said in the order day, then month, and then year. Between those three British people usually add “the”, an ordinal number ending and “of”, as in “The twenty second of December nineteen seventy eight” for “22/12/1978”. The less common way of saying it just with numbers and no month word (“The twenty second of the twelfth nineteen seventy eight”) also seems to be mainly a British thing.

American dates are written and said month, then day, then year, usually without extra words and with simple cardinal numbers (“12/22/1978” and “December twenty two nineteen seventy eight”). All this means that you don’t know if a written date like “2/3/2010” is “The second of March two thousand and ten” or “February three two thousand ten” until you know if it was written in the British or American way! See large numbers below for information about “and” in years.

A smaller but occasionally just as confusing difference is that the British tend to think of the week as starting on Monday and finishing on Sunday, whereas Americans usually start counting from Sunday. There are also minor differences in prepositions of time, including “at the weekend”/ “on the weekend”, “Monday to Friday”/ “Monday through/ thru Friday” and “See you on Monday”/ “See you (on) Monday”. Americans also rarely say “fortnight” for two weeks.

Although it is now extinct, the traditional British billion used to mean a million million (“1,000,000,000,000”, now called a trillion). The British now use an American billion without even needing to think about it, but perhaps because of that history British news programmes sometimes still say “A thousand million”.

See below for how to use “nought” and “oh” in British decimals.

Fractions are basically the same in British and American English, apart from “one fourth” being more common in American than British English.

Zero in British and American English

Americans use “zero” for almost any use of “0”, but there are many British variations, including:

In addition to the use of “nil” in British English sports scores, there is also a difference in the order in which the scores are given. In American sports such as baseball and American football, the home team’s score is given last, whereas in all sports in the UK it is the other way around. This means that if a British person writes or says “7-1” they always mean that the home team won, but if for an American “7-1” may mean that the visiting team won (depending on what sport they are talking about).

Units in British and American English

This topic is only relevant to very particular groups of students such as engineers and logistics staff who regularly deal with both British and American people, but for such people this topic can really help clear up some important confusions.

The British system of units is a very confused mixed of decimal and imperial, with meters used in schools but all speeds on roads in miles per hour, beer in pints but milk in litres, people still knowing their weights in stone and pounds, a hundred degrees Fahrenheit still being used to talk about very hot days but all other temperatures in Celsius, etc. Perhaps the most confusing of all is that both the imperial “ton” (2240 lb, 1016 kg) and the “metric ton”/ “tonne” (1000 kg) are both used, with the pronunciation of the two kinds being identical in standard British English (“tun”, like “sun”). People who are moving to the UK will need to be aware of both systems and perhaps the contexts that both are used in.

Americans such as engineers have to use decimal units at work, but such units are rare in normal life America. This means that units such as kilometres and Celsius will need translating into American units on presentation materials etc, something that is generally not necessary with British audiences.

The reason that I have used the expression “imperial” and the expression “American units” above is that there are also variations between the exact meanings of “pint”, “ton”, etc in the UK and US. The most famous of these (and perhaps the only one of interest to a non-specialist) is that an American pint is smaller than a British one, meaning you get more beer each time in an English pub. Such differences include:

The British very rarely use quarts but if they do then there is also a difference in meaning there:

Americans don’t use “stone”, with a person’s weight given in just pounds, so that “seven stone two (pounds)” in British English is “100 pounds” in American English.

Money in British and American English

“A penny” is occasionally used in American English as a nickname for one cent. In the UK it obviously always means a single one of the smaller British unit of money. However, in British English “penny” is increasingly being replaced by “one pence”, except in idioms like “A penny for your thoughts” and “Spend a penny”. Other amounts of pounds and pence and dollars and cents have different names but there are nicknames which are more or less equivalent, including:

Note that some of these equivalents such as “a shilling” are not that common. More common British ones include “a tenner” for ten pounds and “a score” for twenty pounds. “Tuppence” for two pence is dying out but is still understood. The terms “a pony” for “twenty five pounds” and “a monkey” for “five hundred pounds” are common in TV series and so are fairly well understood. There is no common British term for “twenty five p(ence)” and so no equivalent to the American “a quarter/ two bits”.

How to present and practice British and American English numbers

My favourite activity for both presentation and practice is The Same or Different, in which students listen to combinations like “Monday to Saturday”/ “Monday through Saturday” and “Ten past twelve”/ “Twelve after ten” and have to indicate if they think that the meanings are the same or different. This can be done by raising cards with “The same” or “Different” written on them, pointing at those two words on the board, etc. Students label the same things on a worksheet with “S” for “The same” and “D” for “Different”, then test each other in the same way. I then tend to test them in a different way such as asking them to remember things that mean the same thing as some of the things from the worksheet.Another approach that works well at the presentation stage is to give students a worksheet with numbers to talk about, with both British and American versions on, then test them later on their memories of those variations. For example, they could discuss if they should have the next departmental meeting “on the twelfth of January”/ “on January twelve” or “in a fortnight”/ “in two weeks” and around fifteen other times, dates and numbers, then see if they can remember at least two ways to say each thing.

You can also play How British are your Times, Dates and Numbers. The teacher elicits some numbers and each student writes them down as words, e.g. “nought point three” or “zero point three” if the teacher writes “0.3” on the board. Other ways of eliciting include personal questions (“Your weight”, etc), and visual prompts such as a calendar for dates and a bank note with “five” on it. After students try to write down how they would usually say those things, they check with a list of options and change any which they wrote differently, choosing whichever option they would be most likely to say each time. After guessing with a partner who chose most British options, they are then told which is which. They can then be tested on how many variations they can remember.

If students make lots of mistakes with this topic, e.g. saying “Half to ten” or “The one of December”, you can mix up good British and American forms with common mistakes, ask students to cross off the wrong option on each line, then test them on their memories of the correct variations.

For students who really need to be memorise both versions, for example if they are engineers who talk to people from many different countries including the UK and US, you can also play a memory game such as reversi. Make a pack of cards with different ways of saying the same number, date etc on each one, e.g. “nought point oh five” on one side and “zero point zero five” on the other side. Students spread the cards across the table and take turns trying to guess what is on the other side, then turning over to check.