Summary: Classroom practice and self-study preparation for the second section of the Aptis speaking test 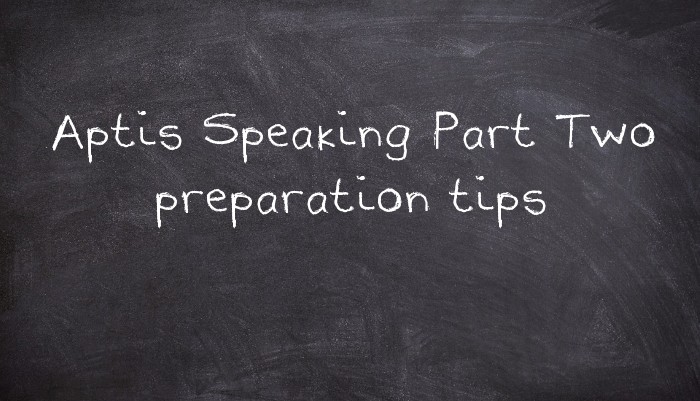 What candidates have to do in Aptis Speaking Part Two

In this part of the test, candidates are shown a picture and are firstly asked to describe it. They are then asked both an easy question and a more challenging question about the same subject as the picture, for example a personal experience question and then an opinion question. For example, the Aptis handbook speaking part two questions are “Tell me about a time you…” and then “Do you think people should…?” about the same topic as the photo. Note that only the first task is directly about describing what can be seen in the photo, with the two questions being about personal experiences of that thing, opinions on that thing, etc.

The first task in Aptis Speaking Part Two is always simply to describe what you can see in the photo. Assuming that all photos will show at least one person, Present Continuous will be necessary to say that “She is sitting at a desk”, “She is smiling”, “She is wearing a shirt”, etc. Objects can be described with “I/ We can see…” and “There is/ are…”. Candidates can also include positions in space like “in front of her” and “on the desk”, and positions in the photo like “in the background”, “in the top right corner” and “in the bottom half of the photo”. Longer sentences can also be made with adjectives like “small” or “tiny” and maybe adverbs like “quite”, “not very” and “absolutely”. The next step is then probably to guess/ speculate, with phrases like “looks”, “looks like”, “seems (to)”, “must be”, “almost certainly” “probably”, “may/ might (well)”, “maybe/ perhaps”, “could (possibly)” plus other vague language like “some kind of…” Vague language can also be used to talk around unknown vocabulary with phrases like “I’m not sure how to say the word in English, but there is some kind of object that is similar to…”

Useful language for answering the other two questions includes:

Candidates are unlikely to want to or even be able to refer back to the photo when they answer the second and third question, but in some situations phrases like “Unlike the situation shown in the photo,…” and “I don’t think this kind of place…” could be natural.

The best preparation is clearly lots of Aptis speaking part two practice, first on the official Aptis pages and then through other websites. Candidates should always attempt to describe the photos the first time with no help, as in the real Aptis test. After that, however, they should use a dictionary, a list of useful phrases (for Aptis, for describing photos more generally, related to the topic of the photo, etc) and/ or model answers to help them improve on their answer. They are then ready to try the same task again.

After that, it should be easy enough to find other suitable photos to describe through Google search, with perhaps the only difficulty being what to choose. One possibility is to search photos of your own town, area, workplace, school, job, company, etc, as this should also produce useful language to describe your own life in Aptis Speaking Part One (as well as in real-life small talk). The same two things can be achieved by the candidates describing their own real photos, from memory or imagination if they don’t have the pictures in front of them. However, these things will be easier than real Aptis tasks and won’t bring up necessary language like “could be” and “looks like”, so candidates should mostly use totally unfamiliar and even random photos. In order to make two extra questions possible, the topics you search for should be things that most people have experienced and have opinions on. That still leaves a huge number of possibilities, such as:

To then answer the two questions, candidates should then make up a personal and then opinion question on the same topic, and then time themselves as they answer them. These are available in the official and other practice tests, and then candidates can use the same question starters to make up questions on other topics.

As suggested for self-study practice above, it can be useful personalisation and a good link to Aptis Speaking Part One to start with students describing photos related to their own kind of job, their own hobbies, etc. The teacher can search for suitable pictures for their students if they found out their jobs, hometowns etc when preparing Aptis speaking part one, for example photos related to their company if they all work for the same place.

Other fun tasks include one student describing a photo from their memory or imagination, and then the next student trying to repeat what they just heard.

You can also do the similar activity of a picture dictation, where one student explains and the other draws what is being explained. This provides intensive communicative practice of “in the top left corner”, “next to”, etc, but is probably too time consuming, too different from the real task and too unlike real-life communication to be worth doing unless students are really focused on this.

Another similar super-intensive task, but involving both students speaking, is them explaining similar photos without showing them to each other until they find all the similarities and/ or differences.

Simpler but more effective activities include students listening to their partner describe an exam-style photo for 45 seconds and then trying to add as much extra info/ language as they can that wasn’t in their partner’s presentation. They can then compete to make as many different personal experience and opinion questions on the same topic for each other as they can.

To make them monitor their own and their partner’s speaking more carefully, you can also play Aptis Speaking Part Two Meeting Criteria game. For the photos part, give each student just one photo to speak about. After they speak for exactly 45 seconds, their partner decides how many criteria they met from a list like:

They then get that many photos to be able to choose from in the next round, e.g. three photos if they did half of the things above.

Something similar can also be done with the questions, with students being given one question stem like “Do you agree that…?” and getting more question stems for the next round depending on what criteria they meet, such as “gave a clearly strong or clearly weak opinion” and “gave a reason for your opinion”.