Summary: How to prepare for and teach Aptis Speaking Part One personal questions 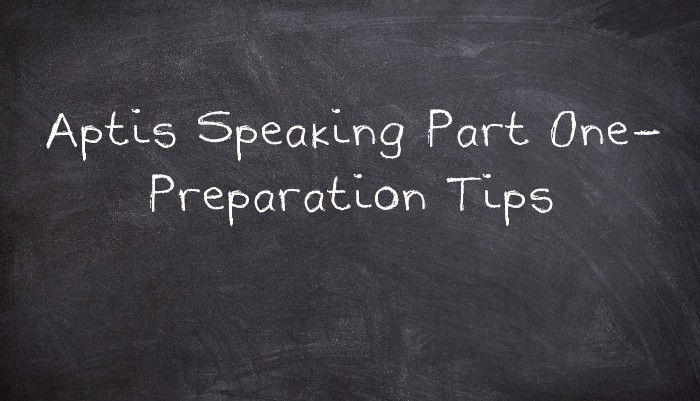 What candidates have to do in Aptis Speaking Part One

In Aptis Speaking Part One candidates are asked three personal questions, and should answer for thirty seconds for each, probably meaning at least four or five sentences in each answer. As a slightly extended answer is needed for each, the questions tend to be ones that make that easy such as “Describe…”, “Please tell me about…” and “What’s… like?” However, there are also some questions such as “What’s your favourite…?” where in real life you could quite naturally answer in a single quite short sentence like “I love Tom Cruise”. Candidates therefore need to get used to answering with more details, with tactics like:

As most questions in this part of the test are about their own experiences, feelings, etc, candidates should be prepared to explain their own:

All questions in Aptis are designed to be answerable by any candidate, so questions about things such as present jobs are unlikely, as some people have never had a job. Instead, candidates might be asked about future versions of such topics, such as ideal jobs/ dream jobs.

There may also be questions about things round and about the candidate, such as the present weather and the room they are in. This kind of question could also include:

As in all parts of the exam, the best practice for Aptis speaking part one is obviously lots of proper Aptis exam practice on a computer, something that is available both on the official Aptis exam page and from other sites such as

Some sites suggest using personal questions from other exams like FCE for further practice, but those questions are much more varied and aren’t usually suitable for exactly 30-second responses, so aren’t so useful. Instead, candidates can practise choosing random topics such as those in the list above and asking themselves “Please describe/ tell me about…”, practising talking for at least 30 seconds on each topic. It may also be useful to speak as long as you can about a topic, choose the best topics and language from that, then use that in a second attempt that is edited down to (almost exactly) thirty seconds.

The good thing about Aptis Speaking Part One is that it covers the kind of personal topics which are great for getting to know each other, especially at the beginning of a new course.

The most difficult thing about preparing candidates for this part of the test is how different the questions and kinds of answers are to real communication. For real small talk practice, I generally get my students to practise answering the question, adding just one more detail and then asking a related (but not identical) question back, as in “Great, thanks. I saw the new Marvel movie and it was surprisingly good. How about you? Did you do anything special?”

Aptis Speaking Part One is good practice for people who only answer questions with short answers (such as the very uncommunicative answer “Great, thanks. And you?”). However, my students just as often have the opposite problem of mini-presentations (“Nice to meet you. My name is Alex Case. I’m an English teacher in Japan. I’ve been there for 13 years. I like history”) in the place of real small talk. Unfortunately, too much Aptis preparation could make this worse.

Classroom practice should therefore always mix up and contrast Aptis Speaking with more realistic practice. Good practice for this can start with answering the same question many times, trying to make each answer longer than the last. But then candidates should try to guess which answer was around 30 seconds long, and discuss which answer would be best in real life (often two different answers). This can also be turned into a game in which they can keep on trying until their next attempt is shorter than the previous one or they give up, with one point for each longer attempt up to that point.

The activity can also be made more cooperative, especially with topics in which everyone could have the same answer such as the weather and the place where they are, by getting them to take turns making longer and longer answers.

With other topics like free time, you’d have to provide short answers from imaginary candidates like “I love making my own beer” for candidates to work together to expand. To add scoring of points (and therefore more fun) to this, you could give them model answers, ask them to compare their best attempts to the model answers and then tell them to give themselves points out of ten, with ten being as good as the model answer. They could also score more than ten points if they think that they have done even better than the model answer.

There is also a similar task that has more for the person listening to do. After asking the original question and listening to the answer, the person who is listening asks follow-up questions to get one more detail (e.g. the profession of the family member that was just being spoken about). Then the same speaker includes that information in their second attempt at answering the same question. This can continue with longer and longer answers until the person listening runs out of follow-up questions, or until the person speaking forgets what info they are supposed to include.

Any of these activities can be done with a list of suggested phrases like those above to help, perhaps then testing candidates’ memory of those phrases and/ or asking them to do the same thing without the list to help. After brainstorming into categories above like “Explaining/ Clarifying”, students can also play a game where they discard cards with those things written on them as they do those things in their answers.

After some intensive practice of longer answers, students should then practise real-life small talk skills like good medium-length answers, asking and answering common small talk questions, and smoothly linking from topic to topic. You can also tie the two kinds of speaking together by asking students to rank the topics by how good they are for small talk situations, then use the best ones in their small talk roleplays, perhaps brainstorming suitable questions in between those two things.