Summary: How to present and practise useful language for the Cambridge FCE collaborative task. 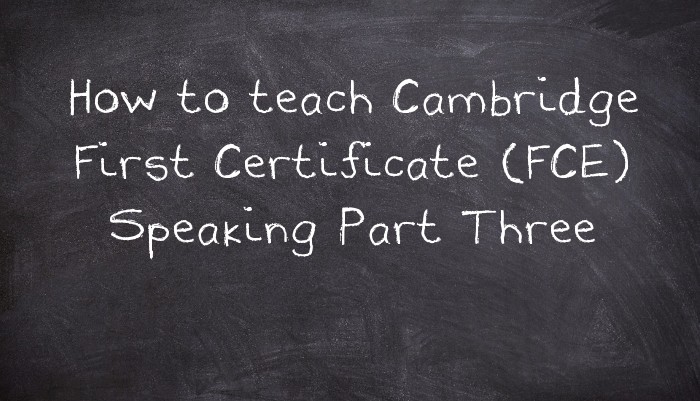 Since the 2008 update of FCE, the instructions are also written at the top of the page of pictures, although students should still listen carefully, especially to extra the background information. After being given the instructions and picture, students are given three minutes to work on both tasks, or slightly longer if there are three candidates. While they are speaking, the examiner will take no part and will usually even look away from them to let them get on with it together.

The students will be interrupted at exactly the time limit and are usually asked to briefly report back to the examiner on what they decided in the second part of their discussion.

“Now, I’d like you to talk about something together for about three minutes.

(four minutes for groups of three)

I’d like you to imagine that… Here are some… which…

First, I’d like you to talk to each other about… these… Then decide which (two)… All right?”

If the examiner doesn’t give a number, it means the students only need to choose one.

Students will need to:

- Get started on the first part of the discussion task quickly

- Discuss as many of the pictures as they can before moving onto the second part of the task, meaning they have to discuss each picture but only briefly before they move onto the next one

- Leave at least one minute for the second part of the task, even if that means abandoning the first part unfinished

- Briefly report back on what they decided, or the point their discussion was at when they were interrupted

It would also help get a good mark for them to:

- Show a range of strong and weak opinions, including agreement and disagreement

Note that they don’t have to reach agreement, but they do have to show their ability to negotiate and compromise in an attempt to find something that they can both agree on.

- Talking around vocabulary they don’t know, with expressions like “This picture looks like some kind of picnic”

Comparing and contrasting language might also be useful for moving between items in the first part of the task (“This one, however,…”, “In the same way, this one…”, etc) and trying to reach agreement in the second part of the task (“But don’t you think this one is more suitable?” etc), and as this is really important for the rest of the exam it is well worth at least some specific practice of this point here.

The examiner might also be impressed by students being able to describe pictures, as “The top left picture” and “The one under that”, but it’s perfectly okay for students to just point at pictures and say “This picture/ activity/ sport/ one/ idea”.

There is little point trying to practise suitable vocabulary for this part of the exam, as there is no way of guessing what topics could come up and it is easy for students to work around any unknown words – a skill that is worth some practice.

The first thing to make sure is that all classroom practice of this part is like the exam, meaning with:

- Written and spoken instructions similar to that of the exam

- Two parts to the task (discussing something about each picture, then deciding something), with the two parts being quite distinct from each other

- The right number of items to discuss

- Pictures rather than written lists of things to talk about

- A strict time limit, and always being asked to report back to class on what they have decided (or where their discussion got up to)

Other tasks like balloon debates and pyramid ranking tasks can bring up similar negotiating and giving opinions language to the exam tasks, but the timing and responding to pictures parts of the exam are at least as challenging as the actual negotiating and should be practised as much as possible. If you do decide to do other speaking activities to provide more intensive practice of one aspect of the functional language they need, it is always worth doing a timed version of the same task or an exam task straight before or after in order to practise using that language under more realistic conditions.

Although it’s difficult to find suitable pictures, there are also things which you’d want to discuss in class anyway which can be done in an exam format, including what their priorities are (needs analysis), which self-study activities are most suitable for them outside class, and things they should do on the morning of the exam. Students can also discuss the difficulties of a set of FCE Writing Part Two tasks and choose the easiest in the same way. Again, these tasks should be done also under real exam conditions, perhaps before or after more leisurely discussion of the points.

With students who tend to talk too much or too little in this task, more intensive practice includes:

- Students trying to speak more than their partner

- Students trying to make their partner speak more than them

Other more intensive practice of the language and skills mentioned above includes:

- A third student controlling the conversation with useful phrases for the exam like “And how about the second best?”

- Students being asked to start with totally opposite opinions and work their way towards agreement, e.g. Students A and B being told “Choose the two items at the far left”/ “Choose the items on the far right” or “Choose meats”/ “Choose vegetables”.

- Giving students phrases, key words or just names of functions (“interrupting politely” etc) that they should use during a Speaking Part Three task discussion, perhaps for points

You could also ask quite strong groups to try the task without pointing to bring in more complex language, but for most students this isn’t really a priority.

To also give more realistic exam practice, I would do each of those kinds of intensive practice with real exam tasks but without realistic timing, then change groups and get them to do the same task under real exam conditions.