Summary: How to make sure Cambridge FCE students get what they most need and the teacher finds out what you need to from day one 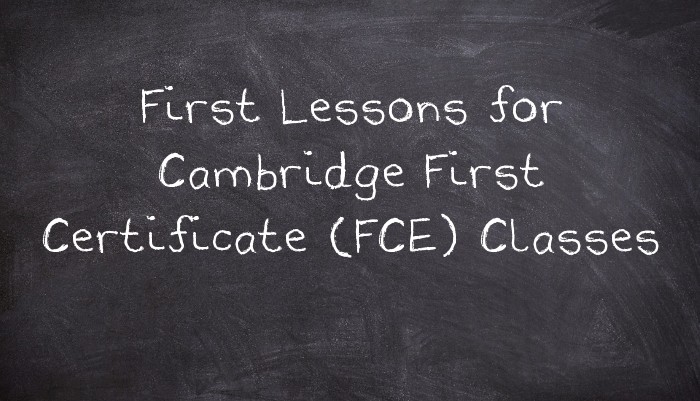 Things you are likely to want to include in a first lesson with a group studying for FCE include, in no particular order:

- Students sharing and/ or learning some information about the exam, including exam tips

- Students sharing and/ or learning some tips for self-study

- The teacher finding out something about the students’ strengths and weaknesses

- The teacher and other students learning some personal information about each other (often known as GTKY, for “getting to know you”)

- An introduction to some of the most important language for FCE students such as comparing/ contrasting, speculating or typical speaking mistakes (which the class will probably also come back to later in the course)

An obvious place to start is with FCE Speaking Part One, as the format of this part of the exam is personal questions that people are likely to want to ask each other anyway such as “Do you have any hobbies?” and “Where are you from?” Some Speaking Part One questions are also what a teacher would be likely to ask during needs analysis such as “Why are you taking the FCE?” and “How long have you been studying English?” The class can do an actual needs analysis task such as interviewing each other in pairs to fill in forms, linking from that to other similar questions on different common FCE Speaking topics such as food and accommodation. For example, students ask each other past, present and future questions about self-study, using English etc and make notes in boxes in the table given. They then brainstorm what the questions could have been, before doing the same with other FCE topics like “family” and “other languages”, going on to practise asking and answering the same questions in a more exam-like format.

You can also start the GTKY, needs analysis and Speaking Part One practice with a game, for example students throwing two dice and asking each other questions about the topic and time (distant past, right now, etc) that the numbers represent.

The needs analysis and/ or Speaking Part One stages above can be extended into other parts of the exam, for example:

- Ending needs analysis with discussion of the best ways of studying for the exam and improving their English more generally, then doing a Speaking Part Three task where students discuss and choose different methods such as “Do lots of practice tests” and “Have English radio on while you sleep”, and/ or doing Speaking Part Four-style discussion questions on the topic.

- Students reporting back to the class on similarities and differences between them, then moving onto Speaking Part Two (extended speaking about two photos), perhaps after a presentation of suitable language.

The last one is particularly useful because Speaking Part Two includes the speculating and comparing language that are two of the most common priorities for students. You can also do specific practice of those language points with a GTKY and/ or needs analysis focus. For comparing and contrasting, you could give students suitable topics (e.g. “EFL exams”) and language (e.g. “far more”) to use to find similarities and differences between each other with. Unlike most GTKY tasks, this also works with students who already know each other.

Another task which is useful for language they really need is getting students to speculate about each other before they ask each other GTKY questions, for example using the topics and phrases given on a worksheet to make statements like “I’m fairly sure you’ve already taken other English exams like TOEIC” and “You’ve probably already tried some FCE practice exams”. This can be turned into a game by making the level of certainty they use the level of the bet that they are placing on their statement, e.g. ten points (or ten dollars) for “I’m absolutely certain that…” and just one point for “You could possibly…”. They get that many points if they are right and lose that many points if their speculation is wrong.

- Writing up their answers to some Speaking Part One questions

- Doing a Writing Part One (letter or email) style task that has been designed to include lots of the same kinds of topics and language as were covered in the first class, e.g. a penfriend letter, giving a friend advice about studying for the FCE, or writing to an English school in the UK to enquire about an FCE course