How to teach Cambridge First Certificate (FCE) Listening Part One 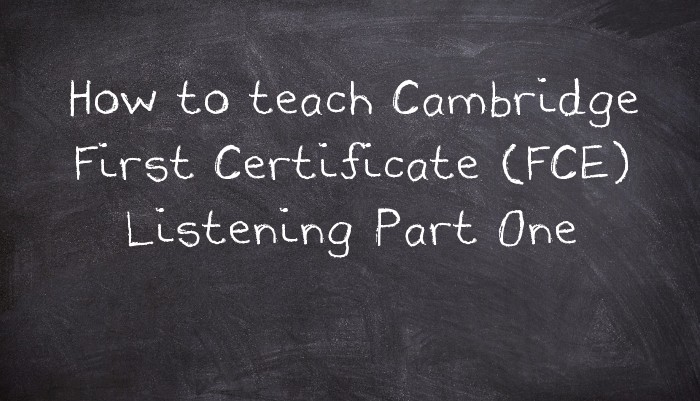 Students listen to eight unconnected very short extracts from monologues or dialogues and answer one multiple choice question with three options for each. As in the rest of the FCE Listening test, each extract is played twice. Also as in the rest of the exam, students can write anything they like on the question sheet because there is time at the end of the test for them to transfer their answers to a separate answer sheet. Unlike Listening Part Three, each extract is heard twice before moving onto the next one, and unlike all the other parts of the exam each question is also read out before the extract is played.

The format of the question is always a statement setting the scene, then a Wh question, and finally three short options in statement form, for example:

“A man and a woman are discussing their wedding.

What thing is still to be decided?

A: the place it will be held

B: who will come

C: where people will sit”

In some questions, students only need to identify the topic that is being spoken about, as in:

“A man is talking about his school days.

What did the man most enjoy there?

There is usually one such question in each listening test. This kind of question can usually be done by just spotting related vocabulary, e.g. “ball” and “coach” for sports. However, students will also need to make sure that the vocabulary is related to the actual question (e.g. that he did actually enjoy that in the example above) because at least one of the other two topics will almost certainly also be mentioned in the extract.

As well as vocabulary related to particular things, in this part of the Listening test students will need to listen out for examples of things (e.g. “motorbike” if the question is about transport), things that mean the same as words and expressions in the question, and things that mean the opposite (so that those options can be crossed off). The right option rarely has the same wording as the recording. Synonyms etc are also used when speakers say something related to the other (wrong) options. This means that although it might be a good idea when completely guessing, students can’t cross off one of the options just because they hear the exact same words on the recording.

Usually one of the options can be crossed off due to being directly contradicted by what is said, e.g. “The ice cream had run out” can be crossed off if the speaker says “There was an unlimited supply of desserts”. The other option will probably be wrong because of a difference in topic (often fairly small) between the option and what is said, e.g. between “The window was stuck” and “There was something sticky like jam on the window”. Those small differences between the option and what is said in the recording are often because the two are about different people or about different times, e.g. talking about the past rather than the future.

Students can often at least cross off one wrong option by listening out for positive and negative phrases like “I wasn’t very pleased with…” and “I was overjoyed to be offered…”, and this kind of language is in almost every extract. Even when students aren’t familiar with positive and negative vocabulary, they can often guess words’ connotations from vocabulary around being combined with expressions of concession and addition like “… rather than…” and “and so is…” Although this is not as important in this part of the exam as in other parts such as matching the speaker to the statements in Part Three, these kinds of phrases can usually help at least a little with understanding around half of the extracts in this part.

Although it’s not possible to choose or cross off an option just from intonation, the way people speak can also often help reinforce what they mean.

Other things which can help students in the exam include:

-       It’s very rare for one of the options to be completely unrelated to anything in the recording, i.e. be impossible to cross off.

-       There is sometimes more than one hint of whether something is the right or wrong answer. For example a wrong option sometimes is both in the wrong time (past, present and future) and has a slightly different topic, or there are two or more words related to the topic of an option.

Other things which can make questions tricky include:

-       Things said which are related to the three options are not always in the same order as the options.

-       It is absolutely impossible to guess that one of the options is less likely to be the answer before hearing the recording (unlike some TOEIC questions).

When students are told to open their listening papers, they should read the first question and underline words that might be important to distinguish the right option from the wrong ones. For example, for the wedding question above the important words are probably “still to be decided”, “place”, “who” and “where sit”. The “still to be” is particularly important because, as described above, in this kind of question the wrong options may well be true in different times, e.g. “We sorted out the venue this morning”.

While the question is being read out loud on the recording, they have two options. One is to listen to and read the question to get their “English brain” attuned. The other is to try to imagine what they might hear on the recording, e.g. related vocabulary, examples of things mentioned in the options, synonyms and antonyms. The latter is probably more important for most people. Although this can be useful practice in class (see below), there isn’t really enough time to actually write any of that brainstorming down in the exam.

-       things which directly contradict one of the options

They will also need to gather enough evidence to guess if they are not sure of the answer – and they should probably be taking the higher level CAE exam if they are instantly sure of every answer in any section of the listening! I recommend crossing off and circling particular words as they listen, e.g. crossing out “rain” in the option if recording says “This will be followed by cold weather and perhaps blizzards”. Students will almost certainly also need to use question marks, e.g. “X?” if they are pretty sure an option is not correct. Some students also find it useful to jot down key words as they are listening, though for others this can make them concentrate too much on the beginning of each extract and make them miss things later on in the recording.

If students still aren’t certain of the answer at the end of the second time an extract is played, they should be sure to guess before it finishes so that they have plenty of time to read and think about the next question. If they can’t guess, they’ll just have to come back to it when they transfer their answers and guess then from the evidence such as marks and key words that they wrote on the question paper while they were listening.

The first time you practise this part of the exam in class, you could:

-       Talk about tactics before they even try it

After listening, the next stage will probably be listening again for things like why particular options are right or wrong and useful language –or you could do the same things with the transcript.

Perhaps after getting students to work out for themselves that these are worth looking for, things students can listen or read for include:

-       Words related to a particular area mentioned in the question, e.g. news or cooking

-       Cohesive devices of addition and concession

More intensive examination of the tricks and help that are in the listening can be done by getting students to classify things the examiner includes in the exam like “One options is usually contradicted in the recording” as “help”, “hindrance” or “both help or hindrance”.

The phrases for showing if what is said is the correct answer or not (“However”, “and that’s the case”, etc) can be practised with one of my favourite activities for actually teaching students what they need to do well in multiple choice listening tasks. The teacher reads out phrases like “We wanted it to be A” and “A is what we decided” and students raise “A” and “Not A” cards depending on whether they think what is said is likely to be the right option or not in a listening test.