Summary: Easy and sensible ways to practise English with your children 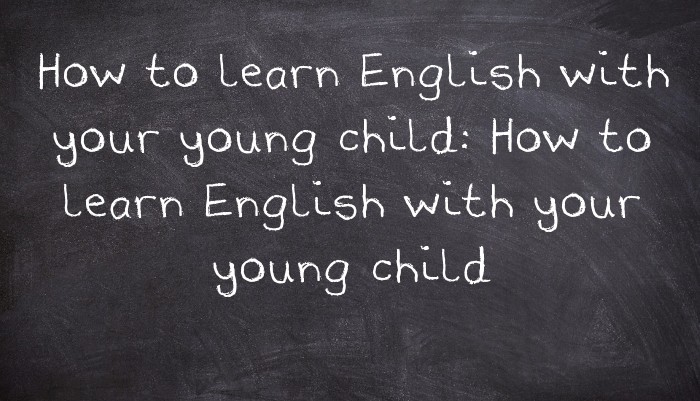 As English is becoming more and more important for academic and business success, some more ambitious parents are going as far as switching to only speaking to their own children in their (usually less than perfect) English. Unless you are going to move to an English-speaking country in the very near future I would definitely not recommend this, as it could ruin your relationship with your child and they might anyway reject the language later if they don't need it and/ or it they feel it is stopping them being accepted by their friends. There are plenty of much easier and more sensible ways of learning and practising English with a young child outside class, some of which are explained in this article.

In bilingual families, parents often find that the child learns the distinction between the two languages more quickly if each parent always speaks just one language, so that one becomes "Daddy's language" and the other "Mummy's language". Again, I'd suggest caution about adopting this approach if it meant one parent struggling to communicate in English and so distancing them from their own children. Having an English-speaking nanny is much more natural, but of course beyond the budget of most of us. You can use the idea of having a clear distinction between languages in more sensible ways, however.

One thing that many families have found successful is to have a particular time when the foreign language is spoken. Some families have every Wednesday as Spanish day and every Monday as French day, or you could set just dinner time aside for communication by everyone in a foreign language. Children shouldn't be pushed too much into using the language, but they will usually see it as a fun game and join in.

Another clear distinction you can make is that you will talk about English things in English. For example, if they are watching Playtime Disney in English, you will chat about what is happening on screen and their reactions to it in English. Again, replies in L1 should be allowed until they get used to it or if it is something they can't say in English yet. The same thing can be done with English language books and songs, discussing the crafts they made in their English lesson, etc.

English language songs, books and TV programmes are probably the most important things when learning English together. To keep the distinction between different languages I mentioned above, don't translate for your child but instead show them the meaning with pictures, simpler English or actions. Alternatively, they will probably be quite happy not understanding every word and will eventually pick it up from somewhere else - after all, I still have no idea what a "tuffet" is despite being an English speaker who sang about Little Miss Muffet sitting on one for years! Other English language things that might be useful includes posters, electric toys (e.g. speaking teddy bears), computer games, board games, card games, and animated songs and stories online. The important thing with all of these is to use them as a way of interacting in English, not something that the child passively sits in front of. Having and using these things in English should not stop them learning about their own language and culture, of course. Again, it might be worth clearly dividing the two by having a different toy box, a different book shelf or set time every day for English language things.

One particularly difficult point is how and when to teach your child how to read in English. Being able to read in English is perhaps the most important way of being able to pick up English on their own, but starting too early can ruin the fun of learning and be a bit of waste of time when they would pick it up in a tenth of the time once they can read in L1 and are a bit older. Perhaps the best way is to read lots of books with them and have some books and games specifically on the alphabet and phonics, and start actually teaching it when they start taking an interest in how the words on the page should be read.

Written by Alex case for UsingEnglish.com