I Before E Except After C

Summary: I ran across someone who said that it was wrong to teach the "i before e except after c" rule because it was wrong more often than it was right. Is that true? 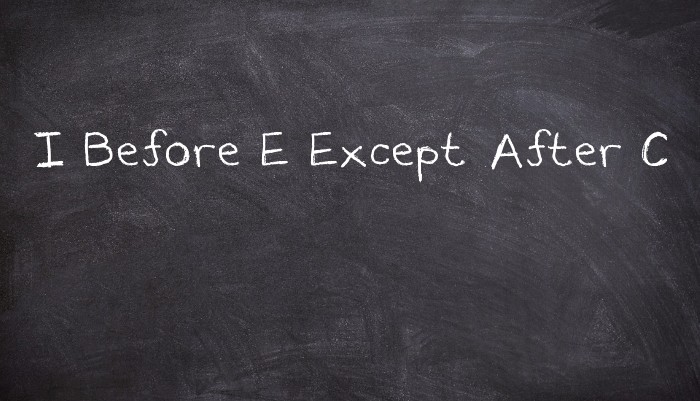 I ran across someone who said that it was wrong to teach the "i before e except after c" rule because it was wrong more often than it was right. Is that true?

That depends on how the rule is taught. I was taught "i before e except after c and when the sound is ay as in neighbor and weigh and when cie makes a 'she/sheh' sound".

I did a search on words containing 'ie' at allwords. I used the concise dictionary results (to save time) and threw out multiple forms of the same word when I encountered them. The search on 'ie' words returned 132 words. Of those words, 120/132 (91%) conformed to the bare 'i before e except after c' rule. The 12 exceptions were:

Depending on one's pronunciation, the first 9 exceptions have a 'cie' combination that is pronounced 'sheh/she'. If this exception is taught, the compliance rate becomes 129/132 (97%). The second group of exceptions contains two words in which i and e fall in different syllables. Since this rule is for diphthongs, these are not really exceptions. If one throws them out, one has a compliance rate of 129/130 (99%). The only real exception is 'financier'.

The first group of 15 exceptions is covered under the "a" sound as in neighbor or weigh exception. When these 15 are added to the initial 9, the group that complies becomes 24/47 (51%). The second group contains exceptions that are not really exceptions, because of the different syllable exemption. When those are removed, we are left with 24/38 (63%). The remaining 14 exceptions are real.

When the two searches are combined, we start with a compliance rate of 129/179 (72%). This is pretty good for the bare rule, giving a speller over a 70% chance of being correct. When we throw out the 11 words in which the i and e fall into different syllables, the result becomes 129/168 (76%). If we add the 'sh' exception and the 'a' exception, the compliance rate jumps to 153/168 (91%). It would appear that the 'i before e' rule, when taught properly, is very useful and works approximately 90% of the time. The research was limited, but it tends to support the rule.

This entry was originally from our blog, which has now been discontinued. Our readers contributed a number of interesting comments representing a variety of opinions on the topic, which we've copied in below. If you would like to discuss this further, please post your comments in our forums:

RECEIVE ... very very very commonly misspelt
BELIEVE ... not as much misspelt but ...

..These two words with: "EIVE" and "IEVE" are BOTH pronounced the SAME.

My wife has a constant struggle spelling CABLE because she uses a lot of LABEL's, so why not, she just keeps spelling it the "CABEL bill" in the check book (or should that really be the cheque book -- I'm Canadian, eh).

Jo | September 11, 2004 12:27 AM
Of the 14 exceptions you mentioned you can drop counterfeit, foreign, forfeit, height, kaleidoscope, leisure, sovereign, and surfeit...since none of them contain the long e sound to which the rule applies.

dream_weaver | September 25, 2004 1:26 PM
It seems that the english language is possibly the most unstructured language on the planet. The problem it seems is, that once a word is used for several years it's eventually accepted into the dictionary as is. Good recent examples may be found in anything relating to the internet, or fashion.
Throw out gramatical structure, make up a word and if it's used enough, it wii become the correct spelling.
So,,, if enough people pay their "cabel" bill, then it WILL eventually become the accepted and correct form. ';-)

Besides,, we haven't even discussed

pro·nun·ci·a·tion (pr-nns-shn)
n.
1. The act or manner of pronouncing words; utterance of speech.
2. A way of speaking a word, especially a way that is accepted or generally understood.
3. A graphic representation of the way a word is spoken, using phonetic symbols.

leanne | January 20, 2006 9:36 PM
Financier is only as much an exception as science and society. Otherwise it would be financer.

Nick | April 5, 2006 5:35 AM
I was taught I before E except after C or in sounding like A as in neighbor or weigh with 8 exceptions weird height forgein either neither seize nor forfeit either

R A Lee | October 5, 2008 3:09 AM
While I enjoyed reading this article, as well as the comments, I started wondering "do the English speaking people not know how to spell, or do we just make a pastime of confounding those who want to pronounce our words correctly"? After all, consider how 'Worcestershire' sounds like Wooster-shure, or, how did Farve (as in Brett) get spelled 'Favre'?
P.S. I actually have a harder time with punctuation, but that's a different story…

William Deutchman | February 18, 2009 4:28 AM
I have determined that the English language is much easier to speak than it is to spell. There is a real need for reform (simplification), but it is unlikely to happen.

Why do I say this? I have found that a long time ago Mark Twain and George Bernard Shaw both wanted a simplified version of English writing.

I think a lot of the problems concerning how complicated the English language is to write, come from the fact that English is the most widely spoken language in the world and therefore, so many foreign words have been absorbed into the English language, with little or no regard for how their spelling conforms to any of these rules. My favourite example of this is the Arabic word 'qibla', which can be easily found in the Oxford English dictionary, but fails miserably to comply with the old faithful "no Q without a U" rule.

John Eric Hopkinson | November 30, 2011 12:41 PM
If Canadians were to learn second languages beginning in lower school then most of the difficulties in learning our language (hybrid English) would disappear. Latin and Greek have disappeared from most curricula, but French Spanish,German,and others are base contributors to modern English. If English is difficult for you and you were born in Canada, you may feel free to blame our diluted and weakened educationaal system. North Americans, in their blissful ignorance of things foreign, consider second language to be somehow an affront.
But we see even small children in television broadcasts from foreign countries speaking better English than is spoken here.

DadThrowsBolts | February 5, 2012 1:07 PM
Somebody took a stab at writing an extended version of the "I before e" rule to cover some exceptions. They also wrote an "o before u" rule which is pretty interesting. http://stuffigoogle.com/steve/i-before-e-except-after-c-extended/

Doug | April 25, 2012 3:37 PM
When you consider that English is a 'mongrel' language then maybe everyone will understand why there is such a wide diversity in the spelling of words and also of the structure of the English language compared to all natural languages.

The English language as we know it today derived mainly from the invading peoples of Europe who came to Britain, Norman French, Saxons and other Germanic tribes, Danish or Norse vikings and a sprinkling of others, add to this the true British language which is Welsh, the Scottish and Irish Gaelic etc, mix it all up and you arrive at the world's only 'mongrel' language.

Hillary | July 16, 2012 10:40 AM
could it be that some words have different origins? English has latin, french, anglo influences.

Kevin | October 21, 2012 5:23 AM
The rule always was " i before e except after c WHEN THE SOUND IS E". When the rule was taught like this in the 1970s in the UK, many students (even those in my class) forgot the teacher ever said when the sound is e. Subsequently this rule has got a bad press because people don't quote the rule correctly i.e. not the full rule with ee sound etc. I admit my text book at the time did not have the ay or cie part of the rule. But from subsequent reading it seems this part of rule was taught in US and probably also in some UK schools at the time? Some of you with even more grey hairs can confirm prior to 1970.

Unfortunately this natural tendency to mis-learn rules happens a lot. The classic is in mathematics that a prime number is a number that is only divisible by one and itself. Many people think this is the rule! Actually the rule is a prime number is a number only divisible by 1 and itself EXCEPTING THE NUMBER 1. Again people forget the bit in capitals . If you forget the bit in capitals then 1 would be prime because 1 IS divisible by both 1 and itself! BUT 1 IS NOT A PRiME NUMBER.

The solution I think is to redefine the spelling rule so that people remember it correctly. Like they did in mathematics. A prime number is a number that has only two different factors. As 1 only has one factor it is not prime by this definition. The number 4 is not prime because it has more than 2 factors.This new rule may not be so elegant but it seems more successfully learnt .....?

Tdol replied to comment from Kevin | October 23, 2012 4:05 PM
I was in schools in the UK before the 1970s and the 'rule' was very clearly 'except after c'. There may have been a change in the seventies, but the rule you object to was already there. It's a flawed rule, but that is what I was taught.