Importance of the English Language

Summary: A look at the importance of English in India and the world. 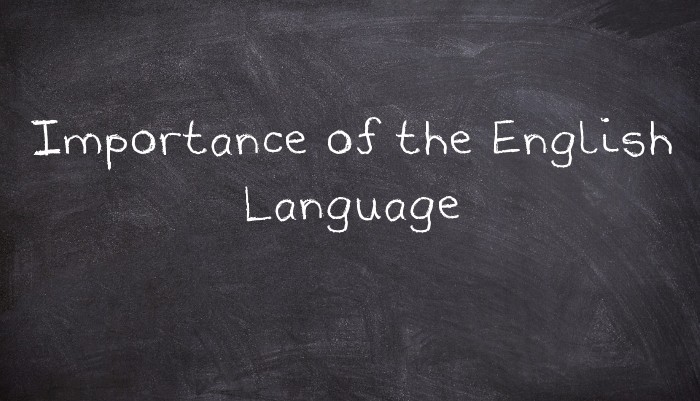 Language, so far as we know, is something specific to humans, that is to say it is the basic capacity that distinguishes humans from all other living beings. Language therefore remains potentially a communicative medium capable of expressing ideas and concepts as well as moods, feelings and attitudes.

A set of linguists who based their assumptions of language on psychology made claims that language is nothing but ‘habit formation’. According to them, language is learnt through use, through practice. In their view, ‘the more one is exposed to the use of language, the better one learns’.

The latest and the most advanced discoveries and inventions in science and technology are being made in the universities located in the United States of America where English language is the means of scientific discourse.

The historical circumstances of India (having been ruled by the British for over two centuries) have given the Indians an easy access to mastering English language, and innumerable opportunities for advancement in the field of science and technology. Many Indians have become so skilled in English language and have won many international awards for creative and comparative literatures during the last few years. Sometime ago, an Indian author, Arundhati Roy, won the prestigious booker prize for her book “The God of Small Things”. Her book sold lakhs of copies all over the globe.

Over the years, English language has become one of our principal assets in getting a global leadership for books written by Indian authors and for films made by Indians in English language. A famous Indian movie maker Shekhar Kapoor’s film “Elizabeth” has got several nominations for Oscar Awards. It does not require any further argument to establish the advantage English language has brought to us at the international level.

English language comes to our aid in our commercial transactions throughout the globe. English is the language of the latest business management in the world and Indian proficiency in English has brought laurels to many Indian business managers. English is a means not only for international commerce; it has become increasingly essential for inter-state commerce and communication.

In India, people going from North to South for education or business mostly communicate in English, which has become a link language. Keeping this in mind, the Parliament has also recognized English as an official language in addition to Hindi. All the facts of history and developments in present day India underline the continued importance of learning English in addition to vernaculars.

Some of the states of India are witnessing popular increase in public demand for teaching of English language from the primary classes. Realizing the importance, recently, the Minister of Indian Railways, Laloo Prasad Yadav, demands teaching of English language in schools. The great demand for admission in English medium schools throughout the country is a testimony to the attraction of English to the people of India. Many of the leaders, who denounce English, send their own children to English medium schools. Many of the schools in the country have English as the sole or additional medium of instruction.

A language attracts people because of the wealth of literature and knowledge enshrined in it. English poses no danger to Indian languages. The Indian languages are vibrant and are developing by the contributions of great minds using them as their vehicle of expression. English is available to us as a historical heritage in addition to our own language. We must make the best use of English to develop ourselves culturally and materially so that we can compete with the best in the world of mind and matter. English language is our window to the world.

English language is one tool to establish our viewpoint. We can learn from others experience. We can check the theories of foreigners against our experience. We can reject the untenable and accept the tenable. We can also propagate our theories among the international audience and readers.

We can make use of English to promote our worldview and spiritual heritage throughout the globe. Swami Vivekananda established the greatness of Indian view of religion at the world conference of religions in Chicago in 1893. He addressed the gathering in impressive English. Many spiritual gurus have since converted thousands of English people to our spirituality by expressing their thought and ideas in masterful English. English has thus become an effective means of promoting Indian view of life, and strengthening our cultural identity in the world.

When William Caxton set up his printing press in London (1477) the new hybrid language (vernacular English mixed with courtly French and scholarly Latin) became increasingly standardized, and by 1611, when the Authorized (King James) Version of the Bible was published, the educated English of London had become the core of what is now called Standard English. By the time of Johnson’s dictionary (1755) and the American Declaration of Independence (1776), English was international and recognizable as the language we use today. The Orthography of English was more or less established by 1650 and, in England in particular, a form of standard educated speech, known as Received Pronunciation (RP) spread from the major public schools in the 19th century. This accent was adopted in the early 20th century by the British Broadcasting Corporation (BBC) for its announcers and readers, and is variously known as RP, BBC English, Oxford English, and the King’s or Queen’s English.

Generally, Standard English today does not depend on accent but rather on shared educational experience, mainly of the printed language. Present-day English is an immensely varied language, having absorbed material from many other tongues. It is spoken by more than 300 million native speakers, and between 400 and 800 million foreign users. It is the official language of air transport and shipping; the leading language of science, technology, computers, and commerce; and a major medium of education, publishing, and international negotiation. For this reason, scholars frequently refer to its latest phase as World English.

Latest from ' Teaching English in Asia'