Teaching the dangers of intolerance 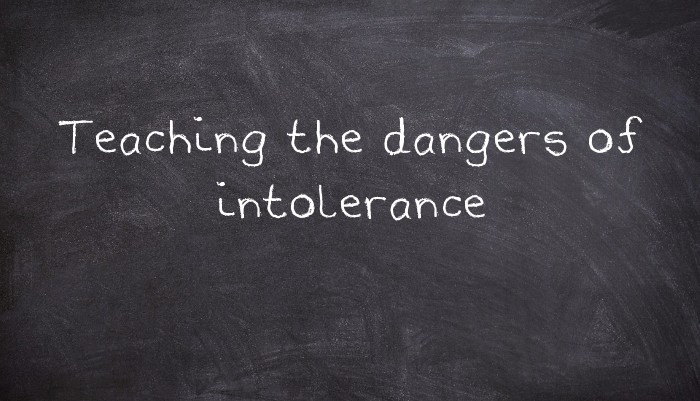 This was a supplementary lesson on the story of Anne Frank that I prepared for my junior high students. There was a chapter on her life in the English textbook we were using in class. This lesson, in addition to teaching students about the dangers of intolerance and educating them about the story of Anne Frank, provides an excellent opportunity to teach or review or practice language functions such as using interrogative pronouns (who, what, where, why, and when) and the past tenses (simple past and the passive voice - simple past).

Having materials such as a world map, pictures of Anne Frank (which can be downloaded from the Internet), a copy of Anne Frank's diary (The Diary of Anne Frank), and the Anne Frank handout (see below) will allow you to present the information in a clear manner.

Start off the lesson with a friendly greeting (good-morning or good-afternoon depending on the day). Ask students some warm-up questions such as "How are you? "What's the date today? "How's the weather? "What's the time?

I quickly review the grammar points. I ask the students how do we use the simple past. (We use the simple past for completed actions in the past.) I draw a timeline depicting the position of the past tense on the blackboard. I ask the students some questions. "What did you do yesterday? "What did you do last weekend? I ask the students how do we use the passive voice - simple past. I review how to make the passive voice (simple past), subject + past tense of the verb be + past participle + noun complement. I write on the board "Stefan, where were you born? "I was born in Canada. I review what interrogative pronouns are. Interrogative pronouns are used to ask for information about an event or situation. I ask students to provide me with some examples of wh-questions ("What's your name? "Where are you from?).

I pass out the Anne Frank handout to students. I put up the world map on the board. I point to Germany and to the Netherlands on the world map. I show them pictures of Anne Frank. I circulate a copy of Anne Frank's diary amongst the students. I read the handout line by line. I have the students repeat after me. I review vocabulary. We practice pronunciation of new words. Students are invited to ask clarifying questions. Students are asked questions about the passage. Students are then instructed to answer the questions on the reverse side of the handout.

We take up the answers in class. Students correct their answers. If time permits, I have the students practice in pairs asking and answering the above questions. I hope this lesson plan sparks ideas for preparing your own lesson on teaching children about the dangers of intolerance. Good luck!

Anne Frank was born on June 12, 1929 in Germany. She was of the Jewish faith (Judaism). She along with her immediate family fled Nazi Germany to the Netherlands (Holland) in the 1930s to escape the anti-Semitic laws sweeping Germany. The Nazis began a campaign of persecuting Germans nationals belonging to the Jewish faith. Upon the occupation of the Netherlands by the Nazis, the Frank family was forced into hiding to save their lives. Brave Dutch individuals who were concerned about their lives and safety assisted them.

Anne Frank and her family, along with four other persons, spent 25 months during World War II in hiding in an annex of rooms above her father's office in Amsterdam, the Netherlands.

An informer betrayed them to the Nazis. She, along with her family and the four others, were arrested and deported to Nazi concentration camps. In March of 1945, nine months after she was arrested, Anne Frank died of typhus at Bergen-Belsen, a Nazi concentration camp. She was fifteen years old when she died.

Miep Gies, one of the family's helpers, saved her diary. It was first published in 1947.

Today, Anne Frank's diary has been translated into dozens of languages and is one of the most widely read books in the world.

(On the reverse side of the handout)

Please answer these questions using either the simple past or passive voice (simple past).

Here are the responses to the above questions: