Where's the (roach)? It's (preposition) the wall.

Summary: A lesson plan to teach young learners how to answer "Where's the (roach)?" with "It's (preposition) the wall." 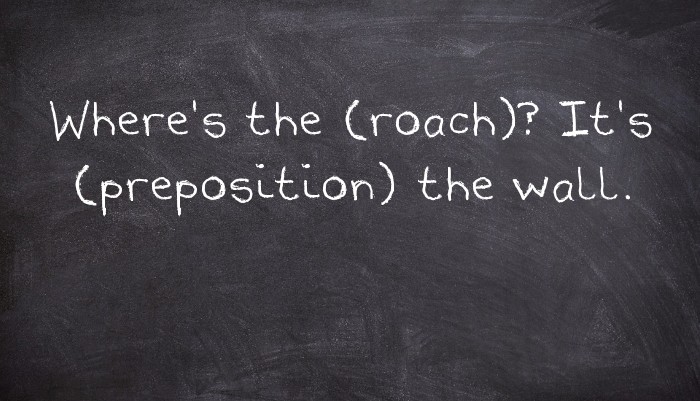 Target Language: Where's the (roach)? It's (preposition) the wall.

Vocabulary: on, in, under (1st lesson)
(behind, in front of, next to) This would depend on their level and
could be taught in subsequent lessons.

Goal: To identify where things are inside a classroom.

Greet the class with a good-morning or good-afternoon depending on the day. Have the class stand up and respond to your greeting and do the warm-up. Ask the students, "Do you want to sing a song?" Usually, they'll nod and begin to twitch and move their bodies. Some will respond with a yes. Songs I teach young learners include the "Eensy Weensy Spider", "Head & Shoulders, Knees & Toes", "The Alphabet Song", "Twinkle, Twinkle, Little Star", "Here We Go Round The Mulberry Bush," "Ring Around The Rosey", and "Row, Row, Row Your Boat".

Model the dialogue with a puppet. I use a Panda puppet to help me do this. Place the flashcards on the blackboard. Take Panda out of a special bag. Say "Hello Panda" and then introduce him to the class. Ask Panda "Where's the roach?" while pointing to the on flashcard. Panda's answers: "It's on the table." Do this for all the flashcards and repeat the question/answer routine a couple of times. Make a mistake or two along the way. Point to the "on" flashcard. Have Panda say, "It's in the box." then turn to the students, and have them tell Panda the correct answer.

Divide the class into 2 groups. One group asks the question "Where's the roach?" And the other group answers, "It's on the table." depending on the flashcard shown. Run between the two groups. Better still, if you have a helper or if the homeroom teacher is present, ask them to help you. Alternate the dialogue between the two groups a few times until they get the hang of the dialogue.

Sit the students in a circle. Hold up a flashcard (on), point to it and say, "It's on the table." Then hold up a ball and say, "Where's the roach?" Demo with several students. Give the ball to one student and the flashcard to another student. Have them stand up. Get them to practice the dialogue. Do this several times with several different students until the class gets a feel as to what they are suppose to do. If the students are very timid or shy, have two students for each part stand up and do the dialogue. So, two students say, "Where's the roach?" And the other two students say, "It's on the table." Play the music and get the students to pass the ball and flashcard around the circle, both going in opposite directions. Stop the music. The two students holding the ball and the flashcard stand up and do the dialogue.

One, two, three, turn around. Divide the class into two equal groups, teams A and B. If there's one team with an extra member, have one student play twice. Line up the two teams in two straight lines, and then sit them down. Demo the game with a few students. Have two students, one from each team, approach the front of the classroom. Turn them around. They are now facing their teams. Have them count to three and then get them to turn around to face you. Show them one of the flashcards. The student who correctly identifies the preposition i.e. on and shouts it out scores a point for their team. This is a fun game to play with learners with very limited speaking skills. Demo with several students so that the class gets a feeling as to how to play the game.

If I there's a Chinese or Japanese teacher or helper in the class, I'll play the "Where's the roach?" game. Divide the class into two equal groups, teams A and B. If there's one team with an extra member, have one student play twice. Line up the two teams in two single straight lines. Demo the game with a few students. Team A students go to Team A teacher and Team B students go to Team B teacher and is asked the question "Where's the roach?" while being shown a flashcard. The respective student responds. They then go to the end of the line and the next student advances. When ready, start the game by shouting out go and encourage the students to advance to the front. Show your student a flashcard and ask him/her the question "Where's the roach?" The other teacher/helper does the same. The student gives an answer, "It's on the table." If the answer is correct, the next student advances. This is an opportunity to help out the student. The first team to get through the questions wins. As a reward, the winning team gets a round of applause.

I make many photocopies of roaches and randomly place them throughout the classroom - on the walls, on the windows, in the desks, in my bag, in my pocket, and under the chairs. I have the students look for and find the roaches, and when they do, I get them to answer the question "Where's the roach?"

If there's time remaining, teach them a new song or sing again the song you did in the warm-up.