Summary: An article about using Word Impact charts to channel vocabulary according to a person's age, gender, work, and attitude. 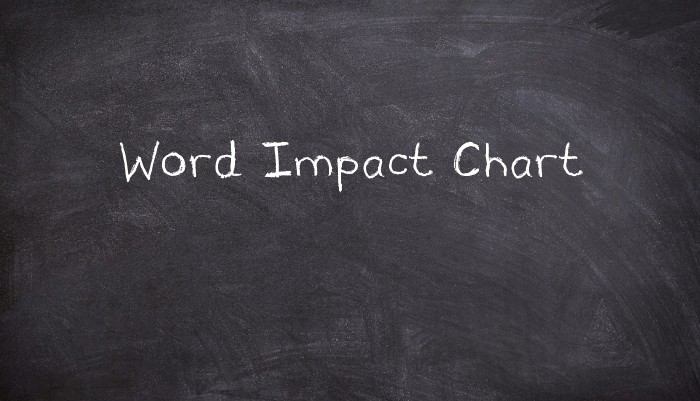 When teaching mid-level to advanced vocabulary I try to channel lessons according to a person’s age, gender, work, and attitude. For example, when planning an exercise the words I teach to a group of teenagers heading to high school overseas would differ from those for a group of businessmen/women planning business trips. The list would also vary according to specific locales and people they would visit, social status, anticipated social situations, type of business, and particular special needs.

Students are warned that different words can be used depending on the situation and to whom we are talking. [This specification of connotation comes only after students have a good grasp of the (dictionary) denotation of the words.]

And everyone learns a simple, “Excuse me.”

A more common need for correct social connotation is apparent when teaching adjectives. A businessman in his office describing his friend calls him “The big guy in accounting” but if he is out with colleagues after work and wants to describe a hated rival he calls him “The fat guy working for Acme”. Then again, when he talks about his new nephew he says “He’s chubby like me”.

Learners need to know how great an effect synonyms have on communicating not only content but emotion and what reactions each word can evoke. An example is how many students will get through introductions easily and then innocently say to me “You’re very fat”, having learned that ‘fat’ is the same as ‘big’. Learners have to be aware of the differences between using a polite “Are you sure?” in a meeting and chancing a fight by using “You’re a liar” in a bar.

To provide a more material guide for students I use a Word Impact Chart. This is a simple Excel chart which assigns (subjective) values to words to give students a better understanding of when and where they can be used. The primary chart (Chart 1 Size) uses Strength (strong/weak) and Social Impact (negative/positive) as its axes for standard adjectives such as “Big, Heavy, Large, Chubby, Fat”, however these value labels can be changed (gender/social acceptance) based on vocabulary of circumstances as in Chart 2 BR which plots “facilities, lady's/men's room, bathroom, toilet, john, crapper, powder room”.

Values are entered in columns B and C to assign chart placement for vocabulary in column A.

By looking at the chart a student can more quickly determine polite/aggressive/neutral/gender use of vocabulary.

‘Big’ has values of 0,0 (Strength, Social Impact) since it is a neutral word; ‘fat’ has values of 14,-14 as it is forceful (+14) and negative enough (-14) to start a fight. This, hopefully, imparts to learners the dangers of using the wrong word in the wrong situation.

On the second chart ladies attending formal functions are taught to ask for the ‘facilities’ and men going out for beer with colleagues learn ‘john’. The gender axis shows that a man would seldom use the phrase ‘powder room’ while women would almost never say “Where’s the crapper?”

While I have found Social Impact and Gender most useful in the classroom, changing axis titles can modify the chart for a variety of vocabulary and phrase functions based on themes such as location, age, political attitude, or any area that requires vocabulary demarcation. At some point students will not need the chart and will simply ask for the values.

Of course the exact values will be subjective to each instructor but over the range of lists the relative values should hold true.

Written by Mike Threatt, who works as a corporate trainer in China having moved here in 1996 after short stints in Japan and Korea. Originally from south Louisiana so trying to convert the local populace to cooking Cajun style.

Written by Mike Threatt for UsingEnglish.com