Summary: Ideas and tips to help you improve your pronunciation outside class 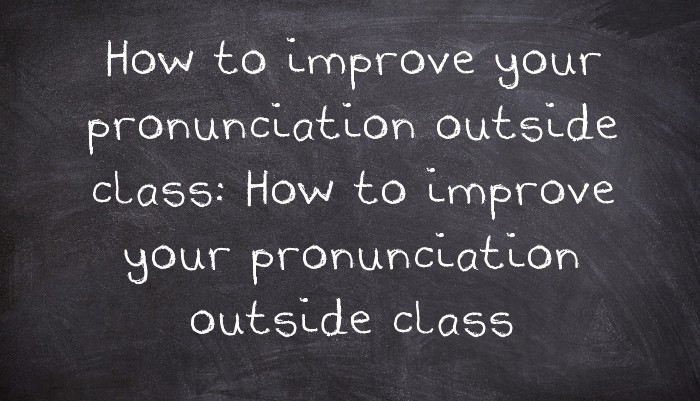 Pronunciation is probably the most difficult part of your English to improve outside class. After all, how can you know if you are pronouncing something wrong? Well, actually you often can, and the first few ideas below will show you how. The ideas nearer the bottom will show you other useful ways to work on pronunciation, all without the need for a teacher.

Just as people are often shocked when they hear a recording of their voice for the first time ("Oh my goodness! Do I really sound like that??"), you will be surprised by how many of your own pronunciation mistakes you can pick up just by recording your voice and playing it back. You can make that even more effective by playing back the model recording and your own recording at the same time or one just after the other. This is most easily done on a computer, or in an old fashioned language lab with the two parts recorded on opposite sides of a cassette. There will still be plenty of pronunciation points you miss, for example vowel sounds that you can't even hear the difference between, but you should be able to get your rhythm and pausing almost perfect just by doing this.

You could also listen to a recording of yourself while just listening for one sound that you want to work on, e.g. making sure that your th sounds don't sound like s, or that you don't miss out h sounds.

Nowadays there are also computer programs and one or two sites that show you a wave form analysis of your voice and compare it to the wave form of the voice that you are copying. Most of the programs then give you a score, e.g. 76 points for being 76% similar to the model recording. It is as amazing as that sounds to see that up on the computer screen, but there are still all kinds of technical and practical problems with this system. One issue is that equal weighting is given to unimportant things like exactly matching the tone of the speaker and important things like stressing the right words. The other thing is that there are actually many other perfectly correct ways of saying the word or phrase, but you have to copy the (perhaps idiosyncratic) version that the computer is producing. If you are copying someone with a different age or gender, you might not want to copy them 100%! Nevertheless, getting visual clues or a score is very motivating, and I spent longer on a Japanese CD ROM that did this than any of the other language learning games and other materials that I was using at the time. It also made me listen to my own production very closely.

You could also try videoing yourself and checking your mouth shape against the original speaker or a model mouth shape.

Before you listen to the recording, try marking stressed words, weak forms (e.g. a "ter" sound for the word "to"), linked sounds (e.g. "saton" for "sat on"), and/ or one particular sound (e.g. all the examples of schwa) on the transcript, then listen and check. After that read the tapescript out, concentrating on getting the points that you were working on right.

A great activity with a transcript and recording is Shadow Reading. Try to speak over the recording, using the same rhythm as the speaker and so finishing each sentence at exactly the same time. When you seem to have the hang of this try again, but this time turning the volume down in the middle of the recording. When you turn the volume back up again, your speaking should still be exactly in time with the recording.

If you want to be able to use a dictionary properly, you will need to learn the symbols that dictionaries use to show the pronunciation. For example, /j/ in a dictionary means the y from yacht, not the j from jam. Dictionaries will always have a list of these symbols at the front, and you can photocopy this and test yourself on it until you know them all. As in this article, phonemic symbols are usually put between forward slashes, e.g. /a:/ for the vowel in hard.

Although it might seem that English spelling is totally random and that it is impossible to know the pronunciation of a word the first time that you see it, that isn't quite true. In fact, with a few pronunciation rules you can usually make a good guess. For example, there is the Magic E rule that explains the difference between rat and rate, and the different pronunciations of ch in chef, cheese and chorus can be explained by the roots of the words being in different languages.

Hold your throat or your ears

Most consonant sounds in English (b, k, d etc) can be put in pairs with another sound that has the same mouth shape and tongue position but is a voiced or unvoiced version. In other words, most sounds come in pairs where one uses the vocal cords and the other doesn't. For example, if you say /p/ for pat and then /b/ for bat while holding your fingers on the side of your throat around the Adam's apple, you shouldn't be able feel anything during /p/ but there should a vibration when you say /b/. The same should be true for /k/ for kangaroo and /g/ for goat, and most of the other consonants in English (the exceptions include r, l, m, n. w and /j/). You can do the same thing by holding your hands cupped over your ears and listening for a booming echo sound.

Use a mirror or video cam

Another thing you can do with unvoiced and voiced sounds like t and d is look in a mirror and make sure that your mouth doesn't change shape. If the two consonant sounds you are practising are not a voiced/ unvoiced pair, however, you should check at least that your mouth changes shape when you pronounce them. For example, the sh from sheep should have a much more rounded mouth than the s from sleep. The same thing is true for vowel sounds, as no two vowel sounds are said with the same mouth positions. This is true even with vowel sounds which are sometimes paired up. For example, the ee from sheep is not just a long version of the i from ship, as the mouth needs to be pulled much wider in the former - that is why we say "cheese" and not "chips" when we take a photo!

You can practise mouth shape in more detail with a book or website that shows mouth shapes for each sound, or you could watch a video very closely and try to copy the actor.

If you have problems pronouncing h in English (common for French and Spanish speakers, for example), you can practise this with a mirror in another way. Put the mirror very close to your mouth. After a word with h, the mirror should be steamed up as if you were going to polish it - but not covered in spit!

One well-known trick using your hands is to put your right index finger in front of your mouth as if you were going to ask someone to shut up with a "Shhhh!" After you have said a word with a th sound in it, you should be able feel a wet patch on your finger where your tongue has touched it.

The other trick with your hand will look even sillier if you try it in public! If you are having problems putting your tongue in the right position, e.g. when saying l and r, put your hand next to your mouth as if it were your tongue, and move it in time with your tongue as you make the sound. For example, with the r you should keep your hand still and try to get your tongue to copy your hand. With the l sound your hand should bend right back and then flip down, with your tongue doing the same.