Summary: How teachers and students can use their bodies to make English sounds easier to pronounce and remember. 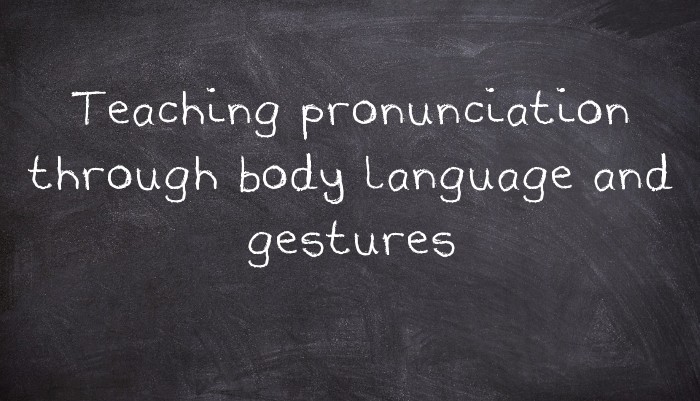 To put all that another way, this means you can use almost any part of your body to demonstrate and help produce stress, intonation or individual sounds. The sections below explain how to do so in more detail.

Using body language and gestures to teach stress and intonation

Teachers probably use gestures most often to demonstrate stress, e.g. to contrast “an INcrease” with “to inCREASE”. Perhaps the most common way of doing this is by pretending to hit a drum and hitting the stressed syllable with a longer and harder stroke than the others. Other possibilities include:

Another common use of body language is to show intonation. I agree with those who say there is little point trying to teach actual intonation patterns, especially to those like me who can’t even tell if a musical note is going up or down. However, it can be useful to wave an arm up and down more extremely to show more extreme intonation (to show interest, politeness, etc) and, conversely, to keep a hand flat to show little range in intonation (to show lack of interest, etc).

For sounds, you can use parts of your body such as your hands to show:

In all of these cases, I would concentrate on what helps the students recognise, pronounce and remember the sounds, rather than trying to accurately reflect where the sound is actually being made in the mouth, the real position of the tongue, etc. Note that all of these will also need verbal explanation, as students are unlikely to understand that a hand means your mouth getting smaller etc unless you tell them so.

If possible, it is best to contrast two gestures as you contrast two sounds, e.g. miming blowing up a balloon as you say “f” in “fanned” but miming breathing on your glasses and then rubbing them on your shirt as you say “h” in “hand”. This works with just about any sounds that you might contrast with minimal pairs, for example:

Other useful gestures include:

Specific sounds that you can demonstrate but which don’t have clear contrasts with other sounds and gesture include:

As well as using the gestures above and getting students to copy them as you elicit, present and correct word stress, minimal pairs, etc, you can also continue to use them during practice activities. For example, if you are doing a minimal pairs game such as Stations (getting students to run and touch two walls with different sounds written on them), you can accompany the first few prompt sounds and words with gestures and then mix up using just the sounds with using just the gestures.

The body language above can also be used to elicit the right pronunciation during later error correction, e.g. just flashing up your hand with the right stress pattern after someone says a word with the wrong stress.