41 ways to say goodbye in English

Summary: A thorough review of formal and informal parting greetings, including confusing differences. 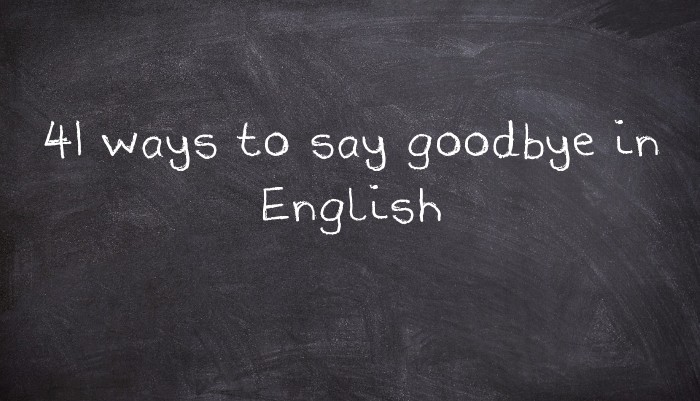 As simple as it seems to say “Goodbye”, I’ve known even very advanced learners of English who suffer from problems like using “Bye bye” all the time, not understanding how to finish “See you…” in different situations and using outdated expressions like “Farewell”. This article lists and explains the intricacies of the many different things to say as you wave goodbye. Unlike other such lists, it sticks just to the very last thing that you hear or say, with things before that like “I look forward to doing business with you” dealt with in other articles and lists of language on starting and ending conversations more generally. There is also a similar list of ways of saying hello.

This is the standard, medium-formality way of saying goodbye in English. It is more formal than “Bye bye” but more friendly/ casual/ informal than “Goodbye”, and is suitable for the majority of situations.

This is the standard formal way of finishing conversations such as business phone calls. Other formal options that you might hear in movies and on TV such as “Farewell” are old-fashioned, so “Goodbye” is almost always the first choice in situations where you need an extra level of politeness such as dealing with potential customers.

Like “I look forward to doing business with you again” and “I hope we have the chance to meet again soon”, “See you…” expressions are usually followed by an actual parting greeting, as in “See you tomorrow. Bye”. Ones which are most likely to be used as actual parting greetings without a final “Bye” include “See you, then”, “See you then” and “See you later”. The first two are different in both meaning and pronunciation, with the first sounding like “See you, theeeeen” with a long but soft final syllable. The other is “See you THEN”, with hard stress on “then”. The “then” in “See you, then” means “in that case”, and makes most sense after a reason for ending the conversation, as in “Sorry, but I have another meeting at 12” “Okay. No problem. See you, then” “Yeah, see you. (Bye).” The other “then” means “at that time”, as in “I have to shoot. My train leaves in ten minutes. But same time same place tomorrow?” “Yes, see you then” “See ya”.

“See you sometime” and “See you someday” are similar to “See you soon” but stronger mean we might never meet again (but hopefully we will, somehow). In a similar way, “See you around” means we haven’t made any plans but we might well bump into each other.

“See you…” with future times such “See you tomorrow”, “See you next…”, “See you the… after next…”, “See you on…”, “See you in…” and “See you at…” are almost always followed by “Bye” and so are not really parting greetings (and are not included in the number in the title of this article). “See you later, alligator” “In a while, crocodile”, however, is used right at the end, and is surprisingly popular for a quote from such an old song.

You may have noticed that just “See you” is often written with its informal pronunciation of “See ya” above, and this is quite common.

This is used when we already know that we’ll speak again (very) soon, as in “Sorry, someone has just come into my office. I’ll phone you back in five.” “Okay, speak to you then. Bye for now”.

In English “Good night” is a parting greeting which is especially used at the end of the day and/ or when someone is going to sleep (not a way of saying hello like “Good morning/ afternoon/ evening”).

In English there can be something childish about the expression “Bye bye”, and I personally only use it when speaking to animals and small children. In other situations, “Bye” is almost always the better choice.

Have fun./ Have a good one.

These expressions look like and can be used for giving good wishes before a final parting greeting, but are often used right at the end, and sometimes with no special meaning. Strangely, “Have a good one” is often used when it isn’t clear what “one” stands for, as in “See you on Monday” “Yeah, have a good one”. In contrast, “Have fun” needs more context, as in “Well, I need to get back and pack my skis. John is picking me up at seven” “Okay, have fun (in Nagano)!”

Speak to you then.

This is most common when we will speak to but not see each other, e.g. when a phone call is planned, but can also mean that we’ve just decided to discuss something together later.

The “See you…” expressions above are medium-level in formality, being suitable even in business. Therefore, you need a more casual alternative if you want to be really friendly. Most options are quotes or are mainly used in one region, age group, etc, but “Catch you later” is quite standard. Note that in these expressions “later” probably doesn’t specifically mean “later today” (unlike the literal use of “See you later”).

Especially if it is used just after a mention of a difficult situation, “Take care” can be a good wishes expression like “Have a safe journey” or “Get well soon”, as in “Well, I’d better get myself to bed to get over this cold before Monday” “Of course. Take care then. Bye”. At the very end of a conversation, however, it is used when we won’t see someone for a long time, if ever, and/ if they are doing something big, as in “Well, I think I’ve packed everything. I’d better get in the moving van” “Okay. Good luck in New York. Take care”. This makes it similar to “See you sometime”. Although some people just use it when we will actually see each other in a few days, I think it’s best kept for heavier parting situations

“Have a good journey” and “Enjoy your flight” are quite dry and are mostly used by staff in the travel industry, so “Bon voyage” is a good alternative for more personal situations. As is usual for expressions in English that we still remember come from French, a very French an accent can seem pretentious but too English an accent (e.g. pronouncing “voyage” as if it is the English word) can seem uneducated, so its best to use “semi-French” pronunciation.

“Good night” is crying out for a more friendly version, especially as such an expression is often used at the end of a drunken night out (“’night!”) or at the end of a child’s story time (“Nighty night”). “Good night. Sleep tight. Don’t let the bed bugs bite” is fairly common for the latter use, but personally I would leave the leave the mildly traumatic third sentence in the dustbin of history, along with most fairy tales…

Similar to “Take care”, this has both a literal and a more general use. The literal meaning is something like “Don’t work too hard” or sometimes “(Relax so that you can) get well soon”, but often it just means “Bye”.

This literally means “Get well soon”, “Don’t get sick” or “Stay safe”, but is occasionally used just when you won’t see someone for a while.

Although this only sometimes means “It really is time for you to go”, it could possibly be taken that way, and so is probably best avoided.

This is a common northern British way of saying “Bye”.

In English, unlike in Italian, this only means “Goodbye”. It is mainly used with no attempt at an Italian accent, but it can still sound pretentious and/ or camp, so should be used sparingly.

Although it seems fairly uncontroversial to want peace, using the English word as a goodbye greeting is not common in normal conversations. Perhaps for that reason, “Shalom” is almost as common.

I’m not sure I’ve ever heard either of these used in real life, and certainly not recently, but in movies they are both upbeat ways of saying “Goodbye”, similar to “Bye bye” nowadays. Apparently the acronym TTFN has had a few little booms over the years, but I think most people will have missed most of them, so it will mostly cause incomprehension.

These are heavier ways of saying “Goodbye”, mainly used when we won’t see someone for a long time or forever. However, they are a bit old-fashioned and could be considered over the top even for such a situation, so “See you sometime” and/ or “Take care” are usually more suitable.

I’m not sure the French are thinking about the literal meaning when they use this to say goodbye, but in English it is used to mean “Until we meet again”, meaning that I am sure that we will do so, perhaps because it is our destiny! In that way it is kind of the opposite of the “see you never” meanings of “See you someday” and “Take care”.

Unlike “Au revoir”, this expression is used with no thought of its literal meaning, instead being a conscious quote from the movie Terminator, usually along with a bad Arnie accent.

See you next time.

Don’t be a stranger!

This is way to say “Keep in touch” that is so obviously over the top that it is rarely used unironically.