Ways of Expressing the Future in English

Summary: A look at seven ways of expressing the future in English 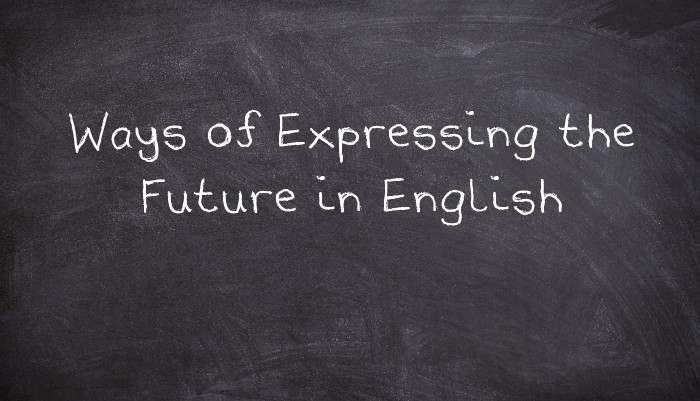 Ways of Expressing the Future in English

Despite what you will find in some course books and student’s grammars, and hear from some teachers, there is no future tense in English. If we want to refer to future-time situations we can do this in several ways. In these notes, we look at seven ways.

The first five of these are commonly used in both speech and writing:

2. Emma is going to see Luke tomorrow – BE + going to, sometimes referred to as the “(BE) going to future”.

5. Emma will be seeing Luke tomorrow – this modal progressive (or continuous) form is sometimes, unhelpfully, called the “future progressive/continuous”.

The last two are used in more restricted contexts:

There are also some so-called ‘future perfect’ constructions, which we will consider at the end of these notes:

9. Emma will have been seeing Luke …

This form usually refers to a situation that began before the moment of speaking, continues at or around, and after, the present moment, and into the future, and is of limited duration:

I am writing these notes on the future. (At this moment).

Lindsay is driving to work this week. (She normally goes by bus).

The present progressive can refer to a future situation that has been arranged before the present time. The arrangement continues through the present until the situation occurs:

Emma is seeing Luke tomorrow, (They arranged this meeting yesterday)

Note that only the context or co-text (in the last example the word tomorrow) can tell us which time-period a present progressive verb form refers to.

Also note that it is simply not possible to make arrangements for some future situations. It is therefore not normally possible to say XIt is raining tomorrow. X

Although you may hear or read that this form indicates ‘present intention’, this is not always true. It is hard to imagine any intention in this sentence: “Look at those black clouds; it is going to rain soon.”

When the present evidence is an arrangement, then there is, practically speaking, no real difference in meaning between the present progressive and BE + going to.

The present simple is frequently used for situations that often or regularly happen.  It can therefore be used for a future situation that is part of a regular series of happenings:

The train for Berlin leaves at midnight tonight.

It is also used for something that is seen as part of a fixed timetable:

The sun rises at 07.34 tomorrow. (We can imagine the speaker thinking of a table of sunrise and sunset times.)

4. the modal will + bare infinitive

The modal auxiliary verb will has a number of possible meanings. Four of the more common are:

a. certainty – John left an hour ago, so he will be home by now. (The speaker is certain that John is home)

b. habitual characteristic: Andrea will sit at her desk for hours without saying a word. (This is what she often does.)

c. volition (willingness): I’ll carry your bag for you. (The speaker is offering to carry the bag.)

Fred will carry your bag for you. (The speaker is offering Fred’s services.)

d. instant decision: What will I do tomorrow? I know! I’ll go to the zoo. (The speaker decides to go to the zoo at the very moment of speaking – no plans had been made for this visit.)

Context tells us whether the certainty (a) is about the present, as in the example above, or the future: Prince Charles will become King when the present Queen dies.

Volition (c), denoting an offer, can refer only to a future situation. Will is normally contracted to ‘ll.

Instant decisions (d) can be made only about a future situation and, usually, only reported by the person making the decision. We therefore usually encounter this meaning only with I or we as the subject. Will is normally contracted to ‘ll.

The word tomorrow in the following sentence tells us that the seeing (meeting) is in the future:

Only context can tell us whether the speaker is certain of the occurrence of the future meeting, or reporting that Emma is willing to see Luke.

Note that other modals, which have different meanings, can also can also refer to future situations, for example:

Peter might come over next week. (It is possible that this will happen)

You may read in some books that shall is used instead of will when the subject is I or we. Only a small minority of native speakers use shall other than in questions, and then only for certainty and instant decision, never for volition or habitual characteristic. Shall is used commonly in questions:

e) making a suggestion: Shall we go to the pub this evening?

f) asking if the person addressed wants the speaker to do something: Shall I arrange the publicity?

Sally’s plane takes off from Heathrow at 9 o’clock tomorrow, so by about midday she will be flying over Istanbul.

It is also possible that the speaker is more concerned with the pure certainty of the action happening than with volitional aspect that might be implied by the use of WILL by itself:

Emma will be seeing Luke tomorrow.

Some writers claim, with some justification, that this use of modal will + a progressive implies, by its lack of reference to intention, volition or arrangement, a 'casual' future. Depending on the context and co-text, the speaker may be intending a ‘casual’ futurity, or may be indicating a situation in progress at a particular time.

This form is not common in informal conversation. It refers to something that is to happen in the future as a plan or decree, normally by some authority other than the subject of the sentence, and  is common in television and radio news reports Thus we are unlikely to hear the first of the following examples (unless Emma and Luke are the names of well-known singers, actors, etc) . We might well hear the second:

Emma is to see Luke tomorrow.

Downing Street announced this morning that the Prime Minister is to fly to Washington this evening for urgent talks about the current crisis.

This form is common only in newspaper headlines, where editors want to announce the news as briefly as possible. Once again, we are unlikely to see the first of the following examples (unless Emma and Luke are the names of well-known singers, actors, etc). We might well see the second:

I will have lived here for just over thirteen years when I celebrate my 66th birthday next March. (At the moment of speaking, six months before ‘next March’, the speaker has lived ‘here’ for twelve and a half years.)

This form is sometimes known as the ‘future perfect’.

It is possible, though not very common, for a speaker to suggest that there is present evidence of  a future action completed before a later future time, or a future state continuing up to that later future time, using BE + going to + have + a past participle form (third form):

By the time Emma leaves Paris tomorrow, She is going to have seen Luke and told him the news.

Learners may see/hear this usage, but are recommended to use only 8. will + have + a past participle (third form), which has practically the same meaning, and is far more commonly used.

This form is sometimes known as the ‘future perfect continuous’.

In many sentences, several of the forms can be used perfectly naturally. The final subconscious choice of form is made by speakers at the moment of speaking, and depends on the context of situation as they see it at that moment. Do not think that there is one, and only one, ‘correct’ form in any given situation.

A fuller version of these notes can be found at http://www.gramorak.com/Articles/Future.pdf