Summary: Video tasks that can be used when practising future tenses and conditionals 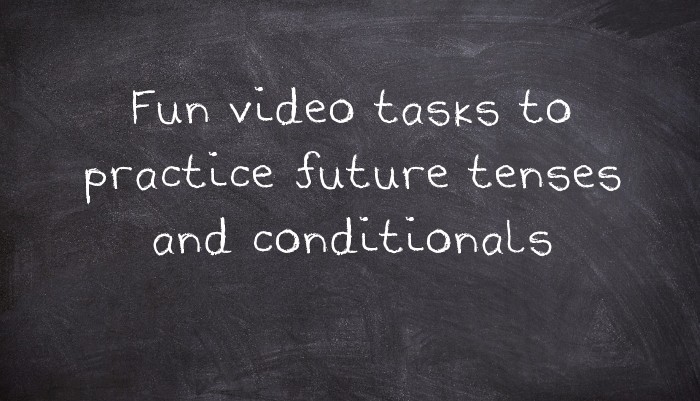 Choose a film where one character experiences a huge change in their lives, e.g. Changing Places. Just before the change happens, get students to guess what the consequences of those changes will be, e.g. "He will be happier with less money"

Give students a list of actions, some of which don't happen in the film. Whenever they are sure that one of them will or won't happen somewhere in the video, they put up their hand and make their sentence, e.g. "Nobody will be killed". The teacher writes that on the board with the person's name and all such statements are checked at the end, maybe for points.

Give students a list of Will statements about the film, e.g. "There will be a car chase", and they pick the ones that they think are true and watch and check

Students pitch film ideas, e.g. for sequels, to each other with sentences like "It will star John Travolta as the President"

Students predict how the film will turn out

Before you watch a sci-fi film that is set in a particular year in the future, students make Will sentences about that year in the future. They then watch the film and contrast their ideas with the film, critiquing things in the film which they think are unlikely to happen by that time or at all

Students make a list of things that a sci-fi film or TV episode shows about the future as they watch it and then make their own sentences about how likely it is to be that way, e.g. "People probably will have flying cars" or "The police will never be able predict crimes before they happen"

Students are given a list of action sentences about what will happen in the video but with the subject left out, e.g. "______________ will put his hand into someone else's pocket", and try to guess who the subject is (from their knowledge of the characters, written character descriptions, looking at photos of the characters, or by being told their jobs) and then watch and check. This works well with sitcoms that most of the students know well, e.g. Friends, or cartoons with different animals

Going to for predictions with present evidence

The teacher pauses the film when something is about to happen, e.g. someone tottering on the edge of a cliff, and students predict the next scene.

The same as above, but with students choosing from sentences on a worksheet, e.g. trying to choose "He is going to kiss her" just before it happens

Will or going to for predictions

Pause the video just before something happens and ask both what is going to happen and its consequences (e.g. "What will the man's reaction be?") so that they can use both forms and contrast them.

Predict a dream sequence where a character fantasizes about a different life, e.g. if they won the lottery

Students predict how someone's life would have been changed by something different happening and then watch that alternative life scene, e.g. Sliding Doors, It's a Wonderful Life or Scrooge.

Give students a list of actions in the film that are difficult to guess exactly when they happen, "slap his business partner". Whenever students think one of those actions is imminent, they shout "Stop" and make a sentence with "about to". If that thing does actually happen within about twenty seconds when the film is restarted, they get a point

Write down a range of dialogue from the video that refers to the future, e.g. "I'll track you down wherever you are". Take out the future tenses and ask students to guess which one is missing (most will be impossible to know for sure without knowing the story well), then watch and check. Discuss any differences in meaning between their sentences and the ones that were in the film, e.g. it being an arrangement rather than just a plan.

Do similar to above, but stopping just before each piece of dialogue is said for students to predict what is said, e.g. using "will" because someone is describing a graph.

Do the same as above, but with the student just guessing the tense that is used rather than the dialogue

Ask students to write down any arrangements, plans (including ambitions), hopes/ wants, and predictions in the video down in a table with those four columns, including their imagination of the characters' thoughts. Compare your ideas at the end of the video, with the students using the correct tenses to share what they wrote down. You could ask them to write down counter numbers and replay the video while you discuss them to make the future tenses (rather than "was going to" etc) natural while you are discussing them.

Mixed past, present and future tenses

Write about seven events from the video on a worksheet. Pause the video five or six times, more or less evenly spread out over its length, i.e. about every two minutes for a 15 minute video. Students have to compete to make as many true sentences about those events as they can, not repeating exactly what other students have said before. For example, they can't repeat "This character will die before the end of the film" which someone said the first time you stopped, but they can say "He is going to die as soon as this person arrives" if that seems to be true. An example with past tenses is "He has just been shot" the first time the video is stopped, "He was shot about five minutes ago" the second time, and "He had already been shot when they threw him the in the boot of the car" the third time.