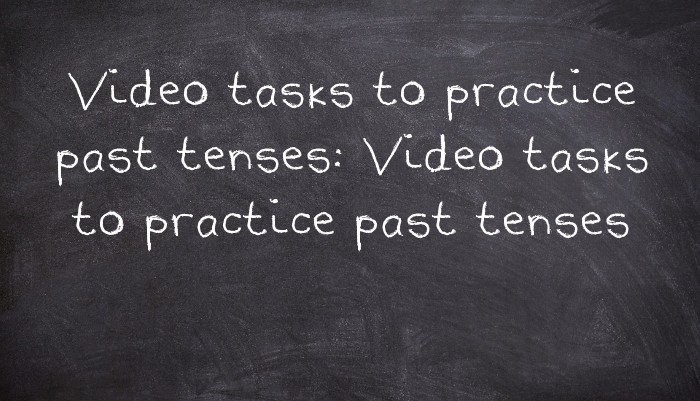 Give students a list of infinitives of irregular verbs and ask them to shout out or write down sentences using as many of those verbs as they can as they watch the film, e.g. "The cat grew really big"

Choose one of the three pronunciations of "ed", e.g. /id/, and ask students to make as many sentences about the video as they can using just verbs with that pronunciation, either while watching (maybe shouting out "Stop!" to the teacher) or afterwards. Alternatively, give different teams different pronunciations to work with.

Do the same as above but with a scene where it isn't exactly clear what the character is doing, e.g. "What is he looking at?" or "How is he feeling?", then watch the next bit of the video to check

Ask students to remember all actions that happen concurrently as they watch and then test them when you stop or pause the video, e.g. "What happened while he was trying to open the safe?" or "What was happening outside while he was searching for the documents?"

Pause a video during a famous continuity problem, e.g. someone wearing different clothes in the same scene, and ask students what they were doing the last time we saw them that makes this scene not match. You can easily find list of these kinds of movie mess ups on the internet. You can also do the same thing just to test them on their memory of last time we saw that same character, e.g. "What disguise was he wearing/ What was he carrying last time we saw him?"

Choose a film that has a split screen or other ways of showing what is happening at the same time like quickly cutting between two scenes. Before watching, students make sentences from a list of actions about two things that they think happen at the same time, then watch and check.

Give students sentences about the film with the Past Continuous parts taken out, e.g. "He was ________________ when his boss came into his office". Students try to guess what the missing part is and then watch and check.

Students watch the film with a clock right next to the screen (or a film or TV series, such as 24, where there is a clock on screen), then are tested on what was happening at particular times, e.g. "What was happening at 15:02?" or "When was she having a shower?" If they will be testing each other, you'll need to let them make notes while they are watching. If you are testing them, you'll need to do the same thing yourself!

Watch a film like Memento with a non-chronological way of presenting the story, and get students to explain which events preceded each other

Get students to put the actions in the film in order before watching, then use Past Perfect to correct their answers, e.g. "Actually, he had already swallowed the poison when his wife stabbed him"

Give students a list of things that happen in a film and tell them one important point in the middle of the film. They have to guess which things from the film had already happened at that point, then watch and check.

Give students half sentences about the film with the Past Perfect parts taken out, e.g. "He had already ________________ when his boss came into his office". Students try to guess what the missing part is and then watch and check.

Ask students to explain why certain things happened, e.g. "He couldn't find the money because someone had already moved it to another room".

Play the video from halfway through a scene and ask students to guess what had just happened, then rewind and check

Narrative tenses (Past Simple, Past Continuous and Past Perfect)

Give students sentences that show the time relationships between two different actions in the video with the tenses taken out, e.g. "The man _____________ (shoot) the car windows. They ________________ (nearly run into) him". The students need to put the two actions into one sentence in the correct tense for how they think those things happened, e.g. "The man shot the car windows and then they nearly ran into him" or "The man shot the car because they had nearly run into him". They then watch and check. You might want to give them a list of suitable linking words like "while" and "so" to make this easier.

You can play a version of The Alibi Game by asking students to make notes on every single detail that happens in the video and then question each other as if the person answering is pretending to be one of the characters in the video. If they get more than three answers wrong on the things they are asked about, they are not really that person and so obvious a spy and so will have to fry!

Before watching a film based in the past, students try to make sentences about life in that time and then watch and check.

Watch a film that starts with a scene in the past, e.g. a childhood scene. While watching the later scene, e.g. the character's present life, the students ask the teacher to pause the film every time they think they can make a sentence contrasting what is on the screen with that person's past, e.g. "He is wearing a suit but he used to wear shorts and a T-shirt"

Choose a film with a flashback to their previous life, e.g. the time when they used to be a criminal before they settled down or their life on the outside before they were arrested. Watch a segment of the film just before the flashback and then stop it before the flashback starts. Ask students to make as many sentences about their previous life (i.e. about the scene they are just about to see) as they can. As Used To is only used for habits, you can either disallow sentences about things that seem to be one-off events, or allow them to use Simple Past as well.

Play a historically inaccurate scene from a film and ask students to spot the mistake. There are lots of lists of such mistakes on the internet, or you could choose a comedy or cartoon (e.g. The Flintstones) that is deliberately inaccurate.

Play a scene from a historical film and get students to make negative sentences about what time it could be representing, e.g. "It can't be the Stone Age, because they didn't used to use the wheel"

Choose a film where characters who live in one time period have to cope with a different one, e.g. the first episode of Futurama where he is frozen and wakes up 300 years later, and ask students to predict what problems they will experience in the new time and why, e.g. "He has problems with the food because he used to eat real fruit and vegetables in his previous life"

Students are given a list of actions in the film and say what things have already happened and which haven't happened yet when you pause the video. You could also add things that they think won't happen at all. This works best as a back to back activity where students who are facing away from the screen do the task from their partners' descriptions of what happens. Alternatively, you could only show them the worksheet when you pause the video to test their memories more, or show them the worksheet at the beginning but not let them look at it while they are watching.

Simple Past and Present Perfect

When the teacher pauses the video, students use the Simple Past and Present Perfect to compare the action on the screen to their own lives, e.g. "He coughed and I have already coughed several times today" or "He flew to Hawaii and I have been to Hawaii". You could have negative sentences instead or as well, e.g. "He paid a bell boy a tip. I have never stayed in a hotel with bell boys"