Summary: Ways of practising the present simple and continuous with video 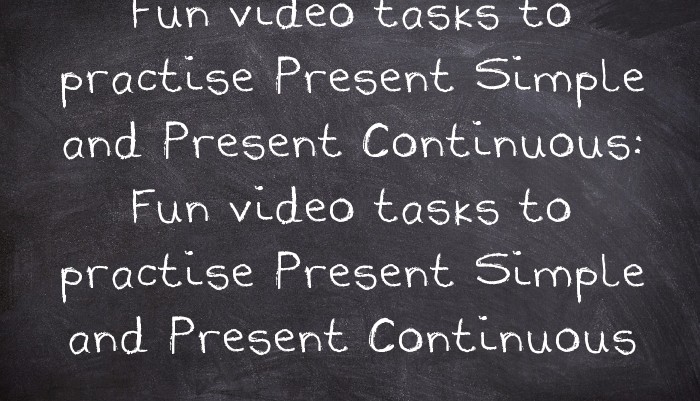 Students make as many true sentences as they can when you pause the video about what is happening on screen. To make it more difficult, you could do this with video turned off rather than paused, but that makes the use of Present Continuous a bit less natural

Choose some scenes where it is less than obvious from one look what the characters are doing and print them off as stills, e.g. by using screen shots from YouTube. Students discuss what they thinking is happening in each picture and/ or write sentences with their ideas, then watch and check

After watching the video, students mime actions that they saw (from memory or from a worksheet) until their partners guess what they are doing, e.g. "You are Joey, because you are posing in front of the mirror". Alternatively, students can describe actions that they want their partners to do, e.g. "You are shooting at the helicopter", maybe even miming a whole scene that way

Students guess what is happening from just the sound (i.e. with the screen covered or turned off), then watch and check

Give students some written descriptions of what happens and get them to predict other people's reactions before they watch, e.g. "When she first meets her blind date, he is wearing a Mickey Mouse tie". They then watch to see whether those are the reactions that they get

Students try to make sentences which are true about both the video and your classroom, e.g. "He is sitting down and so are we"

Students are given a list of action sentences in the Present Continuous but with the subject left out, e.g. "______________ is putting a fish into a saucepan", and try to guess who the subject is (from their knowledge of the characters, written character descriptions or by knowing their jobs) and then watch and check

Students sit so only one person in each pair can see the screen, and the person who is watching describes what is happening to the "blind" student so that they can complete the task on their worksheet, e.g. completing sentences or putting events in order

Show a scene where what the person is doing is not clear, e.g. someone moving dials on a machine to control something in a sci-fi film, someone searching around in the boot of their car or a chimpanzee using a branch. Students guess what the person is doing and/ or why, e.g. "The fish is shooting water from its mouth to hit insects and then eat them"

Students try to match sentence halves, e.g. "He is shouting" + "at a dog that is eating his lunch", then shout out the correct versions as they see the actions on the screen.

Fast forward the video about 30 seconds and ask students to guess what is happening now before you restart the video and check. You can also do something similar with online webcams.

Choose a scene with a split screen and cover all but one section of the screen (only possible if the split screen boxes don't move around, which is often not the case). Ask students to guess what is happening in the other sections, then watch again without blocking anything and check.

Using a piece of card with a hole cut in it, cover all but a small section of the screen and ask students to guess what is happening every time you pause the video (played with or without sound). Watch again to check, pausing at the same points so that they can check and improve their sentences. You can also do this with some help given to the students, e.g. a list of sentences to choose from, a list of nouns or verbs that they can use, gapped sentences, etc.

Choose a film which shows routine or other repeated action, e.g. As Good As It Gets, The Truman Show or the beginning of Four Weddings and Funeral. Give them some basic information to set to scene, e.g. that they will watch them getting ready for weddings. Students have to make as many Present Simple sentences as they can before watching and then watch and check. If your students probably won't be able to create sentences from nothing, you could give gapped sentences, pairs of sentences to choose the most likely from, or sentence halves to match. You can also do something similar with nature films and other science documentaries.

Choose a film that is based in a world where the rules of nature or human behaviour are different from our present world, e.g. a fantasy film, Harry Potter, science fiction or a comedy such as The Invention of Lying. Tell students the basic difference, e.g. people cannot lie in this world or gravity is much weaker than here on earth, and ask them to guess how life is different, e.g. "There aren't any door to door salesmen", then watch and check

Students ask the teacher to pause the film every time that they think they can make a sentence using both tenses that compares the action on the screen with their own habits, e.g. "He is playing the guitar and I sometimes play the guitar". To make it more interesting and challenging, you could ask them to make sentences about their classmates and what is happening on the screen instead, e.g. "He is chatting to his colleagues and Jose almost always does that at work", which their classmates then confirm or deny