How to teach present time expressions

Summary: Teaching tips, games and other classroom activities for "at the moment", "often", "once every two weeks" etc with Present Simple and Present Continuous. 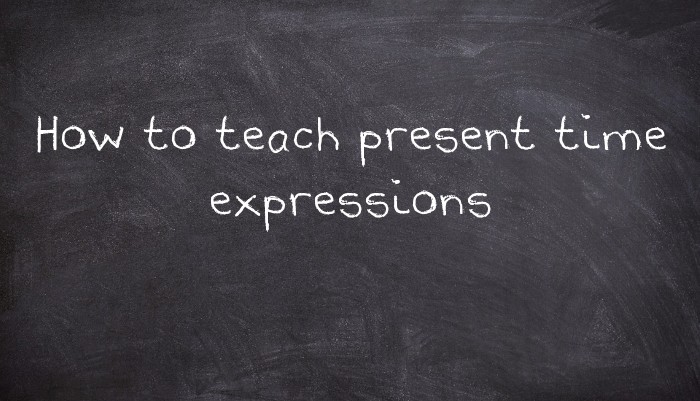 Expressions like “presently”, “usually” and “twice a month” are both the best way of making it easy for students to quickly think of which present tense to use and useful vocabulary in their own right. This article gives ideas on how to present and practise a wide range of present time expressions, including present time expression games.

What students need to know about present time expressions

Reflecting the meaning and use of the tense, time expressions with Present Continuous mostly mean “now”, including, in approximate order of usefulness:

Some other time expressions that aren’t synonyms of “now” are also used with Present Continuous. By far the most common is “today” (“Today I’m speaking to you from…” etc), but it is also possible with “this…” expressions such as “this week”, often in contrast with Present Simple phrases like “I usually work in an office but this week I’m…”

Time expressions with Present Simple reflect that tense’s use to talk about repeated actions (routines, habits, etc), and so are mostly answers to “How often…?” These include similar frequency expressions with “once”, “twice” or “… times” plus “a” (or less commonly “per”) with a singular period of time or “every” with a plural period of time, as in:

The expressions “every day/ week/ month/…” have a similar meaning, but don’t make clear if the speaker means “once a…” or more than once (although it often means the former).

Similar expressions without a number that also go with Present Simple include the basic adverbs of frequency “always”, “usually”, “often”, “sometimes” and “never”. There are also other useful adverbs of frequency which are less commonly taught such as “almost always”, “almost never”, and “hardly ever”. A more extensive list could include, in approximate order of frequency:

This kind of ranking is very useful for students, but note that the order above is very approximate. For example, you could argue that “occasionally” and “rarely” are often the same frequency, but just seen as positive or negative. The ranking of other adverbs of time which haven’t been put above such as “very often” very much depend on the situation. Instead of or as well as ranking, it can be useful to give some (rather arbitrary) numbers to some of the expressions to help students compare them with ones in their own language, such as “99%” for “almost always”, “70-80%” for “usually”, and “60%” for often.

Despite having similar meanings, the two kinds of frequency expressions above go in different places in the sentence, for example in “I often go swimming” and “I go swimming once a week”.

Despite all the expressions used with Present Continuous mentioned above meaning something similar to “now”, the actual word “now” can also be used with Present Simple in sentences like “I used to do exercise every day but now I only walk to the station”. This is because “now” also means “nowadays”, but it is probably best to get students using “nowadays” or “these days” instead of “now” in such situations. To completely avoid such confusion, I would also avoid the word “now” with Present Continuous, instead using “right now”, “at the moment”, “currently”, etc.

“Always” is also used with Present Continuous, usually to complain with sentences like “He’s always speaking with his mouth full”, but this is unlikely to come up at a level where you are teaching present time expressions.

Even if students have two similar present tenses in their own language, they are unlikely to be used exactly as the English tenses are and so are likely to combine with present time expressions in different ways. However, with the explanations above it should be simple enough for students to get their heads around the differences between the two kinds of time expression above and to usually choose the right one in controlled practice. Typical mistakes with making the actual time expressions include:

The frequency expressions in the first four sentences above simply need to change position to be correct. “Once a two… s” is clearly not correct because “a” means “one” and can’t go with a number or with a plural noun. “Per” has the same meaning and use as “a” and so you can’t use both together. This can also be seen in expressions not connected to time like “one per person” and “one for every two people”. “Sometime” is a future time expression meaning “someday”/ “one day”, so students should be careful to include the “-s” if they mean “sometimes”.

Perhaps due to coming across English more in fiction than in daily conversation, my students often get confused between the narrative phrase “at that moment” (as in “At that moment, the detective entered the room and saw that…”) and “at the moment” (meaning “presently”). Some students also try to combine the two to make the expression “at this moment”, but “at this very moment” is more common (but still not very common).

Especially if students already know the meanings of Present Simple and Present Continuous, they should be able to divide present time expressions into lists of ones that go with each present tense without too much help. If not, many low-level textbooks have helpful if somewhat inauthentic texts with lines like “John usually wears a tie but today he is wearing a tutu” that students can use to help them divide the time expressions into two categories by meaning and use. You could then ask them to add other expressions not in the texts to the same two categories.

How to practise present time expressions

There aren’t many drilling games that can practise both kinds of present time expressions at the same time. If you have taught enough different phrases, perhaps the best is to play Present Time Expressions Tennis, in which students “serve” with a present time expression and their partner has to “return” with a synonym in exchanges like “Once a year”/ “Once every twelve months”, “Rarely”/ “Seldom” and “Currently”/ “Presently”.

Tennis should also work as a kind of brainstorming game, with someone choosing a category such as “Meaning now” or “Expressions with once” and students saying more and more examples of that thing. Anyone who makes a mistake, pauses for too long, repeats what someone has already said or gives up loses that point. They then do the same with other categories of time expression. These games can work with an actual ball, with other things such as a toy car going back and forth across the table, or just with the ball being imaginary.

Perhaps proving how useful this language point is, there are plenty of real life small talk questions which include or are likely to prompt present time expressions in the answer, such as:

You can also justify adding more unusual questions like “Do you always have to wear a tie?” and “I guess you occasionally eat sushi in your country too” if you make the activity one in which students choose the best small talk questions to ask each other, avoiding the odd ones. When they finish the speaking stage, they can then put suitable time expressions in the questions and/ or model answers.

Students choose actions like “breathe” and “dance” and give hints like “You are doing this right now” and “(I imagine that) Brazilian people often do this” until their partner guesses what action they are describing. Note that to add more use of expressions meaning “at the moment” it can be useful to give students a world map with time zones written on it, preferably as how many hours they are ahead or behind the country that you are in.

This map can also be used with students choosing and describing countries for their partner(s) to guess with hints like “They are presently sleeping” and “They often eat rice”.

Students choose random time expressions like “twice a day” and “currently” from a worksheet or pack cards and try to make true statements about their partner with those words. This can be made more challenging and fun by playing a kind of “double or quits” variation in which students try to make true statements with one expression for as long as they can, but lose all the points from that round if they make a false statement before they decide to “stick”.

You could also get students to use both present tenses in each guess. For example, if they pick the “almost never” card, they could say “You aren’t wearing expensive perfume. You almost never wear expensive perfume”, and get a point if they were correct about both parts.

Students make as many statements with present time expressions as they can which are true about both them and their partner/ all the people in their group, perhaps with points for any statements which no other groups in the class thought of.

Students choose two random present time expressions and make a true personal statement using one and a false statement using the other. Perhaps after asking for more details with questions like “When did you last…?”, the other students guess which of the two statements is false.

One student chooses an action such as “wear high heels” or “feel restless” and the other person tries to make true sentences about the other person (or someone that person knows such as a family member) with that action and a present time expression such as “You are feeling restless right now” or “Your grandmother never wears high heels”. If their first attempt at a statement isn’t true they should keep trying, perhaps after hints like “It’s not about me” and “More often”.

Students get one point each time that their partner says “I don’t know” in answer to questions which include present time expressions or questions which prompt use of present time expressions such as “Does your father sometimes arrive late for work?”, “Are all your cousins currently working?” and “How often does your mother eat cake during the day?”